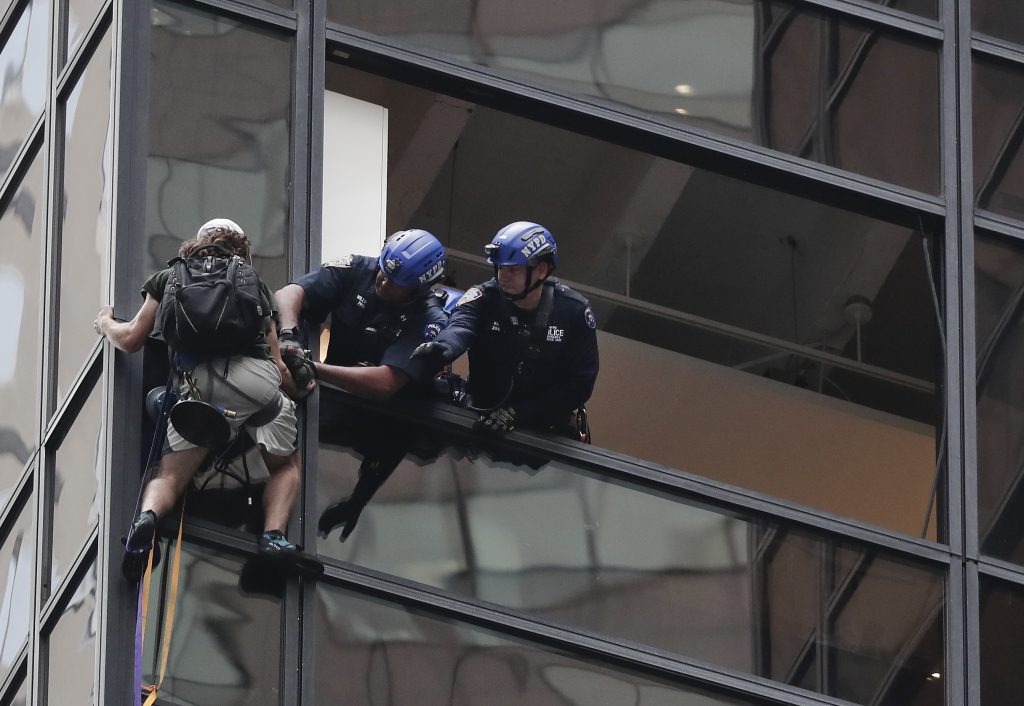 A Virginia man who scaled the all-glass face of Trump Tower last week using suction cups planned his climb, ordering equipment on Amazon, practicing ahead of time and waiting until his parents were away before traveling to New York City, according to prosecutors.

Stephen Rogata, 19, dressed in blue hospital garb, answered a judge’s questions but made no other comments during his court appearance Wednesday via video linkup from a Manhattan psychiatric hospital.

“This was a well-thought-out, planned stunt,” said Pierre Griffith, an assistant district attorney, noting that Rogata waited until his parents went on vacation before driving from Great Falls, Virginia, to New York ahead of the Aug. 10 climb.

At one point, a laptop he was carrying in his backpack fell out, crashing on the ground below as he plodded along from a fifth-floor atrium to the 21st floor, where he was hauled in through an open window by police detectives, Griffith said.

Rogata also politely rejected a police detective’s efforts to persuade him to end his efforts, saying, “No, thanks, I don’t want the rope,” when the investigator lowered a line down for Rogata to attach himself to, Griffith said.

“At best he was doing something profoundly stupid,” she told the judge, noting he made no threats and was hoping to sit down with someone “he could never meet.”

Trump Tower is home of the Republican presidential candidate’s campaign headquarters, his business empire and his personal residence. He was not in the tower on the day of Rogata’s climb.

Rogata was held on $10,000 bail following an arraignment on four misdemeanor charges, including reckless endangerment and trespassing.

After he was arrested, Griffith said, Rogata told a police officer that he had practiced using the suction cups on a three-story building in Virginia, scoped out Trump Tower ahead of his climb, and intended to get to the roof.

“I want to get a message to Donald Trump,” he told a Secret Service agent at the hospital, according to Griffith. The content of the message was unclear.

Rogata, whose birth name is Michael Joseph Ryan, ran away from home in 2014 after his internet privileges were revoked for spending too much time on a “blog on government issues in the United States,” according to a police report in Fairfax County, Virginia.

His father, a career Navy officer, and his mother, a New Jersey native, were with their son and coordinating his treatment back in Virginia, said Collins, noting there “is concern of an ongoing or burgeoning mental health issue.”