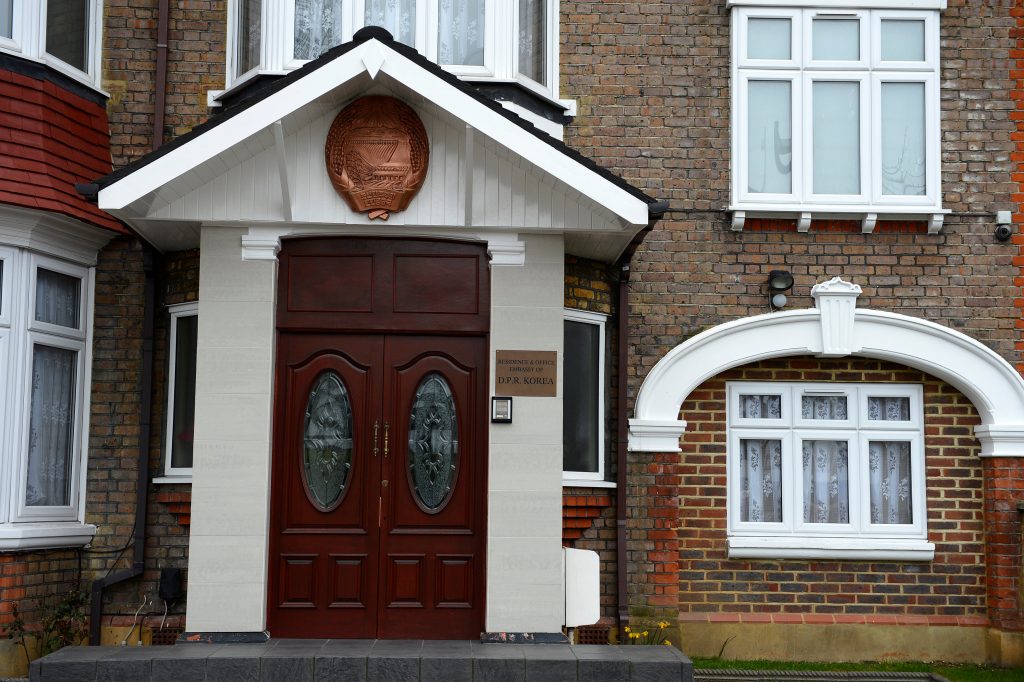 North Korea’s deputy ambassador in London has defected with his family, according to media reports, and if confirmed it would be one of the most high-profile defections in recent years from the increasingly isolated country.

South Korea’s JoongAng Ilbo newspaper reported on Tuesday that a high-profile diplomat in the U.K. defected with his wife and son to a “third country.” The BBC named the defector as veteran diplomat Thae Yong Ho, a counselor at the North Korean embassy and deputy to the ambassador.

Quoting an unnamed source, JoongAng Ilbo said the diplomat embarked on a defection journey “following a scrupulous plan” and was in the process of “landing in a third country as an asylum seeker.”

It was not clear from the newspaper report whether the third country was the U.K. The term is usually used in South Korean media to refer to a country which is neither North nor South Korea.

An official at the North Korean embassy in London would not confirm the defection, describing reports of the event as “quite sudden.”

“If it is appropriate to give a response, then you might hear about our response,” the official told Reuters.

Further calls to the embassy went unanswered. Calls to Thae’s mobile phone were redirected to a voicemail inbox.

Thae’s reported defection follows a string of recent such flights by North Koreans, including twelve waitresses at a North Korean restaurant in China who defected to South Korea earlier this year.

Those waitresses have finished a prolonged period of investigation and have entered into normal society, an official at South Korea’s Unification Ministry said on Wednesday.

The number of defections by North Koreans to the South this year through July totaled 814, an annual increase of 15 percent, a Unification Ministry official told Reuters.

Several diplomats from North Korea have defected to the South over the last two years, including one from Thailand, South Korea’s Yonhap News Agency reported on Wednesday, citing a source familiar with North Korean affairs.

Overall, the number of defectors, mostly from the area near North Korea’s border with China, has declined since leader Kim Jong Un took power following his father’s death in late 2011.

“The bigger picture is that while there have been fewer total defections per year under Kim Jong Un, there have been a higher number of strategically significant and political defections,” said Sokeel Park of LiNK, an NGO which works with North Korean defectors.

Among his many responsibilities, Thae was well-known to the British press, acting as the embassy’s main point of contact for British correspondents travelling to Pyongyang.

The U.S. Central Intelligence Agency also said it had no comment on the reports.

Thae lived at or near the North Korean embassy, which is in the leafy west London suburb of Gunnersbury. He spoke regularly at far-left events in London, including meetings of a British communist party where he would make impassioned speeches in defense of North Korea, according to videos of the events.

Thae’s son, Thae Kum Hyok, who was known as “Kum Thae,” was a pupil at Acton High School, a short walk from the embassy. The school term ended on July 22, according to its website, around the same time Thae is believed to have defected.

The son, 19, has a place at Imperial College, London to study maths and computer science, according to one of his school friends cited by the Guardian newspaper.

Debonair and well-spoken, Thae Yong Ho has over ten years experience working on U.K. and EU-related issues as a diplomat. He is cited in European Parliament archives as a London-based diplomat joining a North Korean delegation to Brussels.

His measured style was a contrast to the bombastic rhetoric often used by Pyongyang’s propagandists, although at some events he sang revolutionary Red Army Choir songs in Korean.

In regular contact with the media, Thae also spoke publicly about media coverage of the isolated country, including the press appetite for sensationalist stories about North Korea.

“I don’t blame reporters,” Thae said during a speech at a left-wing London bookshop in late 2014. “If they broadcast (North Korea) as it is, the editors of these [media outlets] will (change it).

“The more horrifying, the more shocking stories they create, the more they will be viewed by the British public.”