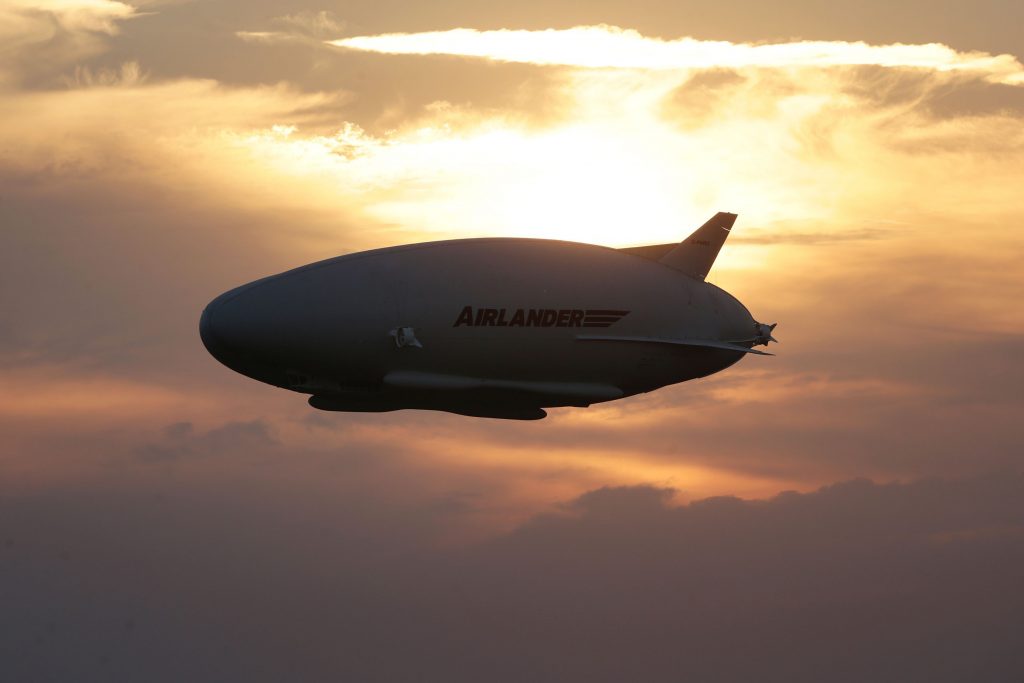 A blimp-shaped, helium-filled airship considered the world’s largest aircraft flew for the first time Wednesday for a short but historic jaunt over an airfield in central England.

A hybrid of blimp, helicopter and airplane, it can stay aloft for days at a time.

The stately aircraft performed a circuit of the area — watched by hundreds of local people who had parked their cars around the perimeter of the airfield — before touching down about half an hour later as dusk fell.

The Airlander is designed to use less fuel than a plane, but carry heavier loads than conventional airships. Its developer, Hybrid Air Vehicles, says it can reach 16,000 feet, travel at up to 90 mph, and stay aloft for up to two weeks.

“It’s a great British innovation,” said chief executive Stephen McGlennan. “It’s a combination of an aircraft that has parts of normal fixed-wing aircraft, it’s got helicopter, it’s got airship.”

The aircraft was initially developed for the U.S. military, which planned to use it for surveillance in Afghanistan. The U.S. blimp program was scrapped in 2013 and since then Hybrid Air Vehicles, a small British aviation firm that dreams of ushering in a new era for airships, has sought funding from government agencies and individual donors.

The vast aircraft is based at Cardington, where the first British airships were built during and after World War I. That program was abandoned after a 1930 crash that killed almost 50 people, including Britain’s air minister.

That accident and others — including the fiery 1937 crash in New Jersey of the Hindenburg, which killed 35 — dashed the dream of the airship as a mode of transportation for decades.

Unlike hydrogen, the gas used in the Hindenburg, helium is not flammable.

Wednesday’s flight came days after a test flight planned for Sunday was scrapped at the last minute because of an unspecified technical issue.

The successful journey was a milestone in the development of a vehicle that remains untested as a commercial proposition.

McGlennan is confident there will be plenty of customers for Airlander — both civilian and military — because of its potential to gather data and conduct surveillance for days on end.

McGlennan said Airlander has many of the assets of a helicopter. It can “provide air transportation for people and goods without the need for a runway. But this thing can take more over longer distances, it’s cheaper and it’s greener.”

Chris Pocock, defense editor of aviation magazine AIN, said the jury is still out on whether the craft is commercially viable.

“Airships and hybrids have still got a credibility gap to cover,” he said. “Technically I think they are there now, but economically I’m not so sure.”