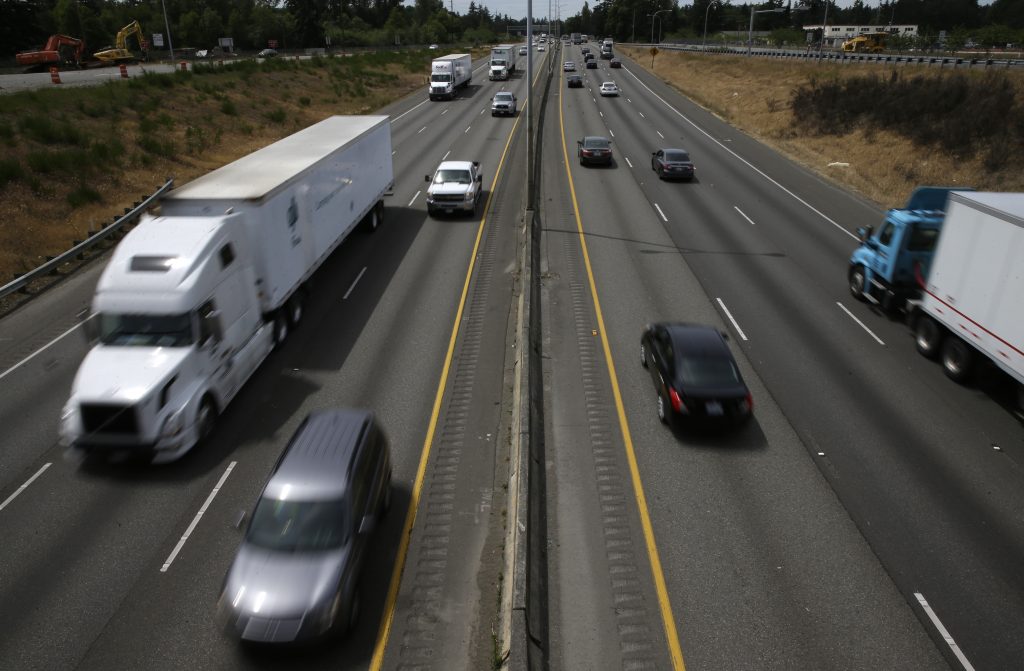 The Obama administration on Tuesday finalized new fuel-economy standards for large trucks, buses and other heavy-duty vehicles, the latest in a series of efforts aimed at slashing greenhouse gas emissions and weaning the nation from its dependence on fossil fuels.

The new requirements affect a class of vehicles that includes school buses, large pickup trucks, delivery and passenger vans, garbage trucks and long-haul tractor-trailers. These heavy- and medium-duty vehicles represent only about 5 percent of total highway traffic but account for 20 percent of transportation-related fuel consumption and carbon emissions. Administration officials said they expect that when the new standards are fully implemented in coming years, they will cut more than 1 billion tons of carbon pollution from the atmosphere, save nearly $170 billion in fuel costs and reduce oil consumption by an estimated 84 billion gallons.

“The standards promote a new generation of cleaner, more fuel-efficient trucks by encouraging the development and employment of new and advanced cost-effective technologies through model year 2027,” said Gina McCarthy, administrator of the Environmental Protection Agency, which developed the new rules in conjunction with the National Highway Traffic Safety Administration. “These standards are ambitious and achievable, and they will help ensure the American trucking industry continues to drive our economy – and at the same time protect our planet.”

The White House previously has undertaken efforts to curb pollution from cars and light trucks, aircraft, power plants and air conditioning and refrigeration units, in an effort to meet pledges to reduce overall emissions in the United States by at least 26 percent by the year 2030, compared with 2005 levels. During his first term, President Barack Obama also put in place the first national policy to increase the fuel economy of medium- and heavy-duty trucks with model years between 2014 and 2018. Tuesday’s regulations build on those early measures.

Unlike some past regulations, the new fuel-efficiency rules for medium- and heavy-duty vehicles have largely been embraced by the trucking industry as a way to cut fuel costs and bolster bottom lines. Leaders from a broad range companies that rely on trucking, including Walmart, Pepsi, Waste Management and FedEx, have endorsed the effort.

“It’s a place where you really have interests aligned. … It’s good for business, it’s good the for the environment, it’s good for our economy overall,” Brian Mormino, executive director of environmental strategy and compliance at Cummins Inc., the world’s largest manufacturer of engines for heavy-duty vehicles, said in an interview from China. He said fuel costs are a top expense for many companies, and they welcome any opportunity to become more efficient. “Regardless of whether oil prices are down, that focus on fuel savings is still important.”

The new demands for fuel efficiency are likely to lead to more expense vehicles – as much as $14,000 more for a large truck, according to the agency – but lower fuel costs could offset the higher sticker costs in a couple of years, officials said. The measure also requires manufacturers to use lighter-weight materials and more aerodynamic designs to improve the fuel economy of trailers.

Administration officials also suggested that the new regulations might eventually help the pocketbooks of ordinary Americans.

“This is going to be a net savings to operators of these heavy duty and medium-size trucks. They are going to be able to get places using less fuel, which has a bottom-line impact on the cost of goods, for example, or the price people pay at grocery stores,” Transportation Secretary Anthony Foxx told reporters Tuesday. “So I think this is a very strong economic rule, from the standpoint of job creation and from the standpoint of reducing burden on consumers.”

Environmental groups were quick on Tuesday to praise the tighter fuel requirements.

“For a long time, an efficiency gap has forced consumers to pay the freight for inefficient shipping,” Jack Gillis, a vehicle expert for the Consumer Federation of America, said in a statement. “These standards will save consumers money, just as other energy efficiency goals have saved families and businesses money on cars, light-duty trucks, and home appliances such as refrigerators and water heaters.”

Jason Mathers, director of supply chain at the Environmental Defense Fund, said the rigorous new standards will make the American freight industry much cleaner, while generating new jobs and saving average Americans money. The organization calculates that the average semi-truck today burns 20,000 gallons of diesel fuel each year, roughly equivalent to the amount of fuel used by 50 new passenger cars. Fuel has long been the largest single cost for trucking fleets in the United States, accounting for almost 40 percent of the cost of ownership in 2013, the group said.

In addition, officials said Tuesday that the Department of Energy is investing nearly $140 million to improve vehicle efficiency, including projects to develop the next generation of fuel-efficient truck technologies.

President Obama on Saturday previewed the released of the new fuel-efficiency standards in his weekly address, and he signaled that the administration plans to roll out more environmental policies before he leaves office in January. In the weeks and months ahead, he said, “we’ll take steps to meet the goal we set with Canada and Mexico to achieve 50 percent clean power across North America by 2025. And we’ll continue to protect our lands and waters so that our kids and grandkids can enjoy our most beautiful spaces for generations.”