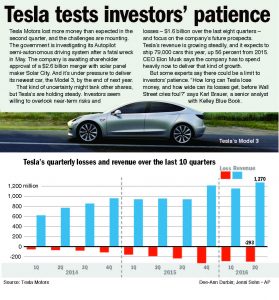 U.S. stocks slid Tuesday as investors continued to sell phone company and utility shares. Energy companies rose with the price of oil, but stocks have been locked in an up-and-down pattern for more than a week.

As the dollar weakened, the price of oil rose for the fourth day in a row to sustain a recent recovery and metals prices also rose. The Labor Department said inflation remains low, as prices paid by consumers were unchanged in July. Most stocks were down, but for the second day in a row, the biggest losses went to traditionally safe investments like telecom and utility companies. Bond prices also inched lower.

The dollar has been very strong over the last few years compared to other currencies. Early this year it looked like the dollar would stay at those elevated levels because the Federal Reserve was raising interest rates while other global central banks were cutting them to stimulate their economies. John Cannally, chief economic strategist for LPL Financial, said the Fed has changed course. By leaving interest rates where they are, it has allowed the currency to weaken a bit, aiding U.S. manufacturing and energy companies and other exporters.

“The Fed is using the dollar as sort of a tool of monetary policy,” he said. “The Fed wants to give China and emerging markets time to heal and get their houses in order.” 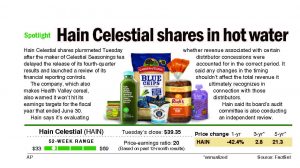 The Labor Department said prices paid by consumers were unchanged in July as gas and other energy prices kept inflation down. Core inflation, which leaves out food and fuel prices, inched up just 0.1 percent for the month. Overall, inflation is up just 0.8 percent over the last year. That’s far below the 2-percent target set by the Federal Reserve, and investors concluded that means the Fed is less likely to raise interest rates soon.

Stocks have wavered lately as investors review mixed reports about the U.S. economy as they try to get a sense of its health. On Tuesday the Federal Reserve said U.S. factories cranked out more autos, machinery and chemicals in July, which suggests manufacturers might be recovering, though growth remains little changed from a year ago and manufacturers aren’t adding many jobs. Meanwhile the Commerce Department said the pace of home construction grew by the most since February.

Tea maker Hain Celestial Group delayed its quarterly report because of accounting issues and said it doesn’t expect to reach its financial projections for the year. The stock tumbled $14.05, or 26.3 percent, to $39.35.

Beauty products maker Coty posted results that surpassed expectations, but said little about its purchase of Procter & Gamble’s beauty business, a $15 billion deal expected to close in the next few months. Coty said it’s “premature” to comment on how the combined business will do. The stock skidded $1.47, or 4.9 percent, to $28.28.

TJX, the parent of T.J. Maxx, Marshalls and other stores, traded lower after saying higher wages and the strong dollar will hurt its results in the third quarter. Its stock gave up $4.80, or 5.8 percent, to $77.97.

Dick’s Sporting Goods announced better-than-expected quarterly results and raised its projections for the year. Its stock jumped $3.87, or 6.1 percent, to $58.76.