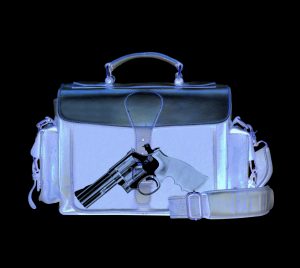 Transportation security officials say they seized a record-breaking number of firearms — 78 — last week in carry-on bags at airports around the country.

The Transportation Security Administration said that of the 78 firearms they found, 68 of them were loaded. The agency said the previous record of firearms seized was 74 and that was set in May.

Among the items the TSA found in this latest stash were four “inert/replica grenades” in carry-on and checked bags at four airports, officials said.

The TSA reminded passengers in a statement “if an item looks like a real bomb, grenade, mine, etc., it is prohibited.” And if these items are found at a security checkpoint, be prepared for delays, as officials have to “respond to resolve the alarm.”

“Even if they are novelty items, you are prohibited from bringing them on board the aircraft,” the agency said.

There were a few other interesting finds: a cane sword in a carry-on bag at the Omaha airport and a knife in a concealed pill bottle at San Francisco’s airport.