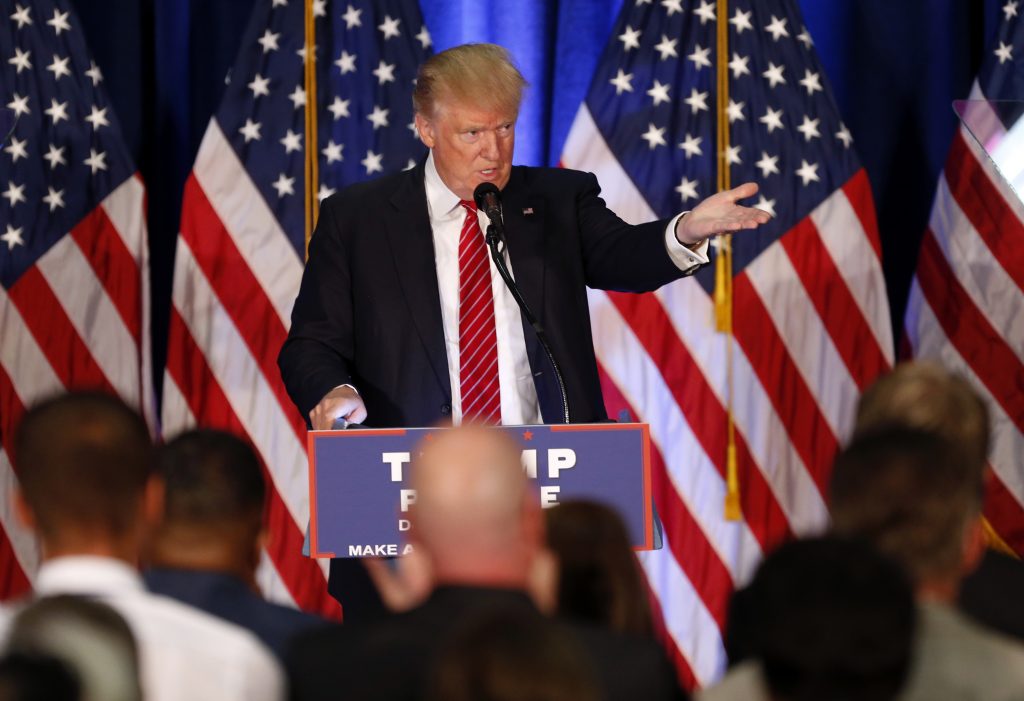 Donald Trump says that as president he would end “our current strategy of nation-building and regime change” because they don’t work. His dislike for nation-building is shared by many, including none other than the target of his criticism, President Barack Obama.

In fact it was Obama’s predecessor, Republican George W. Bush, who committed the U.S. to large-scale nation-building projects in Iraq and Afghanistan. Obama discarded that strategy while trying to keep enough U.S. influence there to prevent those two countries from crumbling. Obama’s approach may not have worked, but it’s not Bush-like “nation-building.”

And while the Republican presidential nominee argued against nation-building in a foreign policy speech Monday, he advocated for something even more grandiose: seizing Iraq’s oil wealth in the aftermath of the U.S. invasion in 2003 that toppled Saddam Hussein.

“If we had controlled the oil like I said we should, we could have prevented the rise of ISIS in Iraq, both by cutting off a major source of funding and through the presence of U.S. forces necessary to safeguard the oil and vital infrastructure products necessary for us to have the oil.”

Rather than nation-building, this would have been nation-grabbing, making Iraq a de-facto American colony.

In the final months of his administration, Bush negotiated an agreement with the Iraqi government that called for all U.S. troops to leave the country by December 2011. Obama stuck to that schedule, believing that the Iraqis needed to stand on their own while the U.S. turned its attention to other pressing needs at home and abroad, what he called “nation building at home.” Obama, supported by his first secretary of state, Hillary Clinton, saw Bush’s nation-building effort as a proven failure.

Iraqi politics, however, never overcame sectarian divisions, undermining the Iraqi army and leaving an easy target for IS.

Trump is right that the Islamic State capitalized on the political and security vacuum in Iraq in 2014, but it’s not clear that a long-term U.S. military occupation to hold and exploit Iraqi’s oil resources would have led to a more stable outcome.

Trump says he would have used money from the sale of Iraqi oil to pay for the care of wounded soldiers and the families of those Americans killed in the war.

“This proposal by its very nature would have left soldiers in place of our assets,” he said. “We would have had soldiers there guarding this valuable supply of oil. In the old days, when we won a war, to the victor belonged the spoils.”

After major military victories, the 240-year-old United States has tended to pour money and aid back into countries it has fought to help re-establish governments and services. It was, in fact, a kind of nation-building approach. The U.S. still has troops in Germany and Japan, with the permission of those nations, but it never confiscated their natural resources.

In his speech, Trump said that as president he would discard “nation building.” In its place would be what he called a new approach, which he described simply as halting the spread of “radical Islam.” He said that if elected he would convene an international conference on the topic and work closely with Israel, Jordan, Egypt, Russia, the NATO alliance and “all others who recognize this ideology of death that must be extinguished.”

“Those who do not believe in our Constitution, or who support bigotry and hatred, will not be admitted for immigration into our country,” Trump said. “Only those who we expect to flourish in our country — and to embrace a tolerant American society — should be issued visas.”

Trump’s proposals were the latest version of a policy that began with his unprecedented call to temporarily bar foreign Muslims from entering the country — a religious test that was criticized across party lines as un-American.