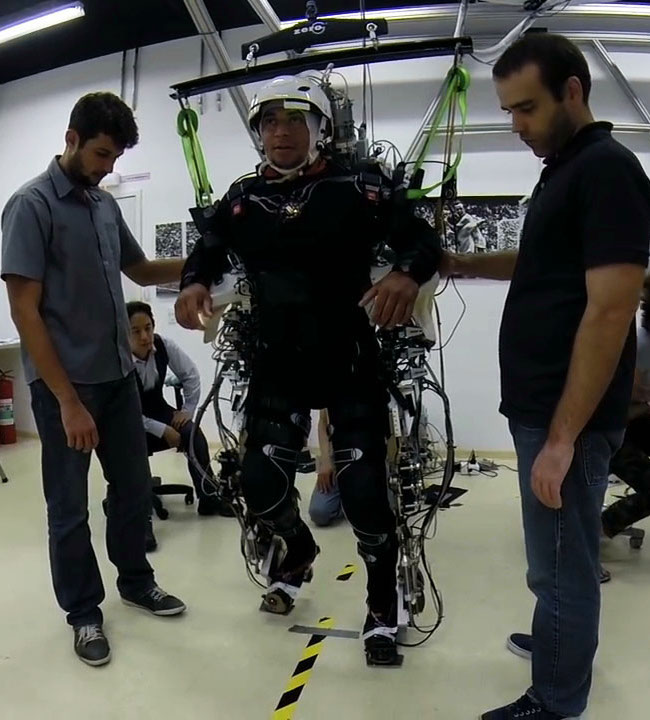 Eight paralyzed patients regained some sensation and muscle control in their legs after a year of training on brain-controlled robotics, according to a study published this week by a Duke University neuroscientist and his colleagues around the world.

The finding is the first of its kind that shows that brain-machine interfaces, including virtual reality, are not just assistive devices but can actually stimulate partial recovery in paraplegics. Published in the online journal Scientific Reports, the research offers a measure of hope to people who have suffered devastating paralysis from spinal cord injuries and strokes.

Patients in the study had been paralyzed at least five years — and some more than a decade — so researchers do not think the results were part of any natural recovery.

The study was conducted in Brazil as part of the Walk Again Project, a consortium of 100 researchers from 25 countries. The team first made headlines in 2014 during a demonstration at the soccer World Cup in Brazil, where a patient wearing a special brain-controlled exoskeleton suit was able to kick a soccer ball to open the competition.

Work began with the patients in late 2013 in a neurological rehabilitation lab using the sophisticated equipment, and within months scientists began to notice something remarkable, Duke’s Dr. Miguel Nicolelis said in a phone interview from Brazil.

Working at least two hours a week with the machines, paraplegics began to feel sensations and show movement in lower extremities, “something that nobody expected, and that was a tremendous shock,” said Nicolelis, who is director of Duke’s Center for Neuroengineering.

Some patients began to feel movement in their bowels and experience bladder control, which could help reduce their dependence on catheters and laxatives in daily living. That can prevent dangerous infections paraplegics tend to get.

That doesn’t mean the patients can hold themselves up or walk without help. But some can move their legs in walking motion unassisted if their weight is otherwise supported. The level of progress varied among patients.

One of them, dubbed “Patient 1,” was a 32-year-old woman who was able to stand in braces or walk using a walker. By the end of 13 months, she could move her legs voluntarily if her body weight was supported in a harness. She had been paralyzed for 13 years.

The brain-machine equipment promotes direct communication between the brain and computers or prosthetics, such as robotic limbs. The systems record signals in the brain and translate motor commands from those signals into movement. The machines use sensors and are noninvasive.

The patients wear a skull cap that looks like a swim cap with electrodes. In the beginning, Nicolelis said, patients were instructed to imagine their legs moving. Nothing happened — it was almost like their brains did not recognize that they had legs.

But using virtual reality goggles, the patients were told to move avatars — figures on a soccer field. They started by moving the figures’ hands and arms. The virtual reality systems then showed the patients’ the soccer players walking on the field, and with every step, the patients would be given tactile stimulation through a special touch-technology sleeve they wore on their arms, which were not affected by paralysis. Eventually, although they were standing still, when the soccer player moved, they felt they were walking, too.

“We fooled their brains,” he said. “Their brains received the sensation that their own legs were moving. It’s called a phantom limb sensation.”

Recording the activity, the scientists saw that slowly, the brain was acquiring ability to modulate when the patients thought about moving. In the second stage, patients used a robotic device to move legs in the air. Ultimately the patients used an exoskeleton suit with robotic systems and gyroscopes to stand and walk for 20 to 50 steps. All along, the patients received stimulation on their arms.

Nicolelis said in many traumatic spinal cord injuries, a small percentage of nerves can remain, but after years without brain signals, the nerves go dormant.

“I think what we did was to turn these guys on again,” he said, speaking of the brain and nerve interplay. “We just got them transmitting information again.”

As the researchers continued to work with patients, even small movements seemed like major victories.

“It was very emotional, for all of us, not only for the patients,” Nicolelis said. “It was very unique and nobody will forget the first day we saw these people moving again.”

For nearly 20 years, Nicolelis has been working on brain-machine interfaces, improving the technology and conducting experiments with rats and monkeys that learned how to control robotics with their brains. In a 2014 TED talk, the scientist joked that early on, people suggested he and his fellow researchers needed a psychologist.

In Brazil, the work started out with a focus on testing the exoskeleton technology and seeing how patients could move with it. The scientists didn’t expect that the machines would provide effective treatment, leading to progress that left rehabilitation experts amazed.

There is still a lot of work to do, and the study will continue. The scientists want to work with patients with more recent spinal cord injuries to see whether the treatment works better with them. It will be a challenge to spread the sophisticated therapy more widely, so the team hopes to develop simpler technology that could be used in a patient’s home.

Twenty scientists collaborated on the paper published Thursday. It was funded by grants from the Brazilian Financing Agency for Studies and Projects, the Brazilian Ministry of Science, Technology and Innovation, and the Itau Bank.

Though scientists urge caution about spinal cord injury recovery, Nicolelis believes the findings open the door for paraplegics to realize at least some partial function.

“That changes the game,” he said. “Instead of just accepting that you will be in a wheelchair, it may mean that with this kind of therapy we will be able to set you up for some kind of partial neurological recovery, which would be phenomenal. Anything that be gained changes these people’s lives.”