National One Person Shot in Milwaukee Protest; No Repeat of Riots
National 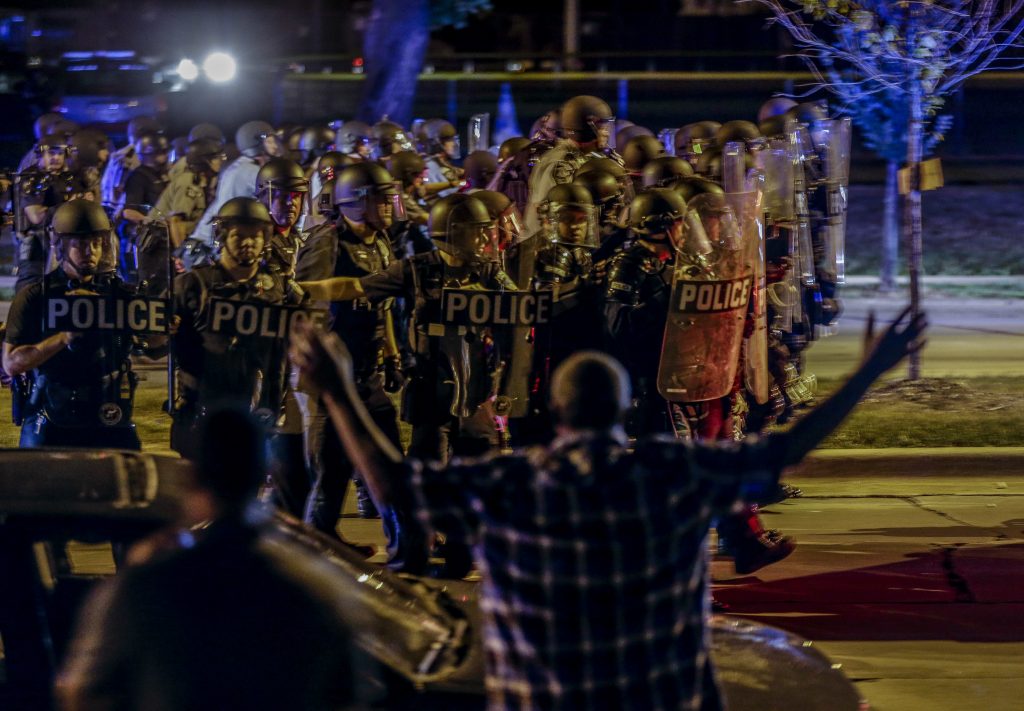 One person was shot and wounded during a second night of violent unrest in Milwaukee to protest the fatal shooting of a black man by police, but there was no repeat of the widespread destruction of property.

On Sunday night, two dozen officers in riot gear confronted protesters who were throwing rocks and other objects at police near where Sylville K. Smith was fatally shot a day earlier. Police tried to disperse the crowd and warned of arrests.

The city’s police chief said Smith, 23, was shot and killed by a black police officer Saturday afternoon after he turned toward the officer with a gun in his hand. The officer’s identity has not been released. The killing touched off violence that led to the destruction of six businesses on the city’s mostly black north side Saturday night. Wisconsin’s governor put the National Guard on standby to protect against further violence.

Media footage showed a small group of protesters running through the streets Sunday night, picking up orange construction barriers and hurling them out of the way. Police posted on social media three locations where they said shots were fired. Police said an injured officer was taken to a hospital after a rock broke the windshield of a squad car.

Police said early Monday that an 18-year-old Milwaukee man was seriously injured when he was shot during the unrest Sunday night. Officers used an armored vehicle to retrieve the man and took him to a hospital. Police did not say who shot the man, but that they were continuing to look for suspects.

There were no other reports of injuries and no major destruction of property.

Milwaukee Police Chief Ed Flynn said at a press conference earlier Sunday that Smith turned toward an officer with a gun in his hand. Flynn cautioned that the shooting was still under investigation and that authorities were awaiting autopsy results, but that the officer “certainly appeared to be within lawful bounds,” based on video from his body camera.

He said the officer told Smith to drop the gun and he did not do so. It was unclear how many rounds the officer fired. Smith was hit in the chest and arm, Flynn said.

At the same news conference, Mayor Tom Barrett said a still image pulled from the footage clearly showed a gun in Smith’s hand as he fled a traffic stop Saturday.

“I want our community to know that,” Barrett said. But he also called for understanding for Smith’s family.

“A young man lost his life yesterday afternoon,” the mayor said. “And no matter what the circumstances are, his family has to be hurting.”

Flynn declined to identify the officer who shot Smith but said he is black. The police chief said he wasn’t sure what prompted the stop but described Smith’s car as “behaving suspiciously.”

In addition to the businesses that were burned to the ground Saturday night, 17 people were arrested and four police injured.

Gov. Scott Walker put Wisconsin’s National Guard on standby Sunday, and 125 Guard members reported to local armories to prepare for further instructions, although they were not deployed.

Milwaukee County Sheriff David Clarke said Smith had been arrested 13 times. Online court records showed a range of charges against Smith, many of them misdemeanors.

In December, the U.S. Justice Department announced it would work with Milwaukee police on changes.

Critics said the police department should have been subjected to a full Justice Department investigation like the one done in Ferguson, Missouri, after the killing of black 18-year-old Michael Brown in 2014 touched off violence there.