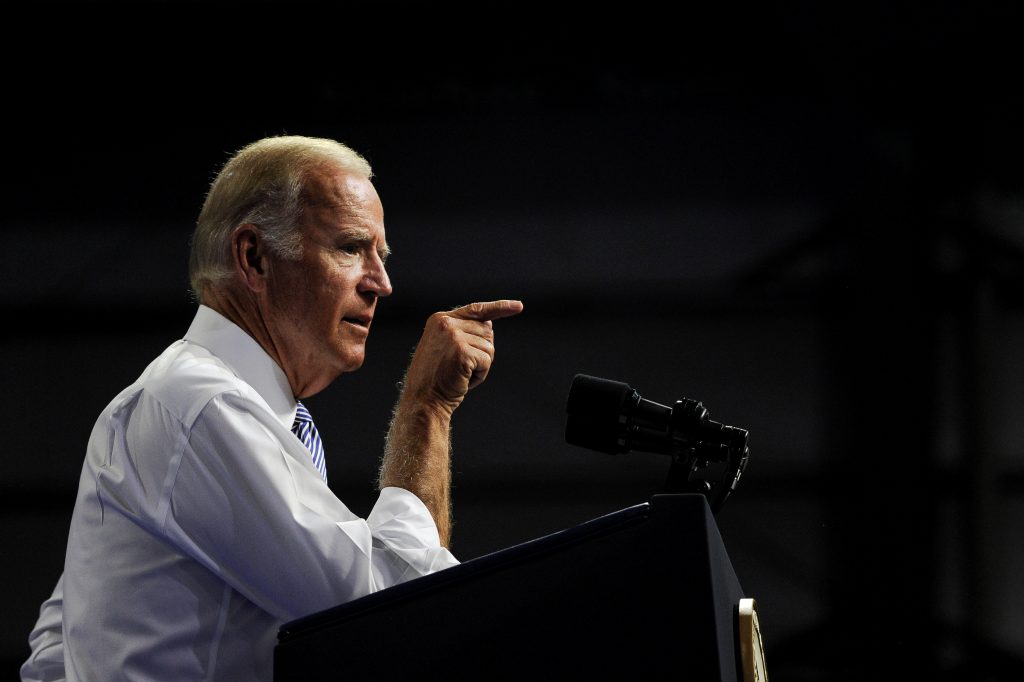 Vice President Joe Biden assailed Donald Trump’s ability to lead America at home and abroad on Monday, branding him as indifferent to the needs of Americans in his first campaign appearance with Democratic nominee Hillary Clinton.

Biden, who decided not to make a third presidential bid last year, said in his native city of Scranton that Trump was “totally, thoroughly unqualified” to be president, calling him a dangerous voice on national security and foreign policy.

On the economy, he said, Trump’s reveling in his reality show tag-line, “You’re fired,” showed his true colors.

“He’s trying to tell us he cares about the middle class? Give me a break. It’s such a bunch of malarkey,” Biden told a crowd of about 3,000 at Riverfront Sports, adding: “He doesn’t have a clue.”

Pennsylvania has not supported a Republican in a presidential election since 1988, but is among the most-contested battleground states between Clinton and Trump, who are both vying for white working-class voters here.

Even as polls show her leading Trump, Clinton has faced lingering questions about her trustworthiness in the fallout of her use of a private email server as secretary of state and over her family’s sprawling foundation. She has tried to make the case that working-class voters would fare better under her economic policies than Trump’s and that her opponent would inject danger into an already unstable world.

Offering himself as a powerful character witness for Clinton, Biden portrayed the former secretary of state as the most qualified person to lead the country, singling out her foreign policy experience and passion for improving people’s lives. He cited his long history with Clinton, saying he’s known her for three decades, since before she was first lady in the 1990s.

“Hillary has forgotten more about American foreign policy than Trump and his entire team will ever understand,” he said.

“Hillary Clinton is going to write the next chapter in American history,” he said.

Introducing Biden, Clinton sought to sow doubts about Trump’s ability to bring jobs back to blue-collar communities like Scranton, where Biden lived for the first decade of his life before moving to Delaware.

She acknowledged that many people in the audience might have friends considering voting for the Republican, but offered this advice: “Friends should not let friends vote for Trump.”

Clinton and Biden spoke ahead of Trump’s national security address in Ohio, questioning the business mogul’s ability to represent the nation overseas.

In his speech, Trump accused Clinton of pushing policies that have opened the United States to foreign terrorists.

Clinton said Trump had been “all over the place” on foreign policy and had suggested sending in ground troops to fight the Islamic State group. “That is off the table as far as I’m concerned,” she said.

If Trump likes them, “He would have loved” Joseph Stalin, leader of the Soviet Union until his death in 1953.

Seeking a common bond, both Democrats pointed back to their family ties in northeastern Pennsylvania. Biden, a frequent visitor, recalled the street he grew up on and credited the city with helping to mold his values. Clinton noted her grandfather worked at a Scranton lace mill factory and that her father was raised here and later attended Penn State University. The family spent summers at a family cabin in nearby Lake Winola, she said.

Biden and Clinton had been planned to campaign together here before last month’s Democratic National Convention but their rally was postponed because of the deadly police shooting in Dallas. The vice president is expected to campaign for Clinton in several battleground states where he remains popular, including Pennsylvania, Michigan, Ohio and Florida.