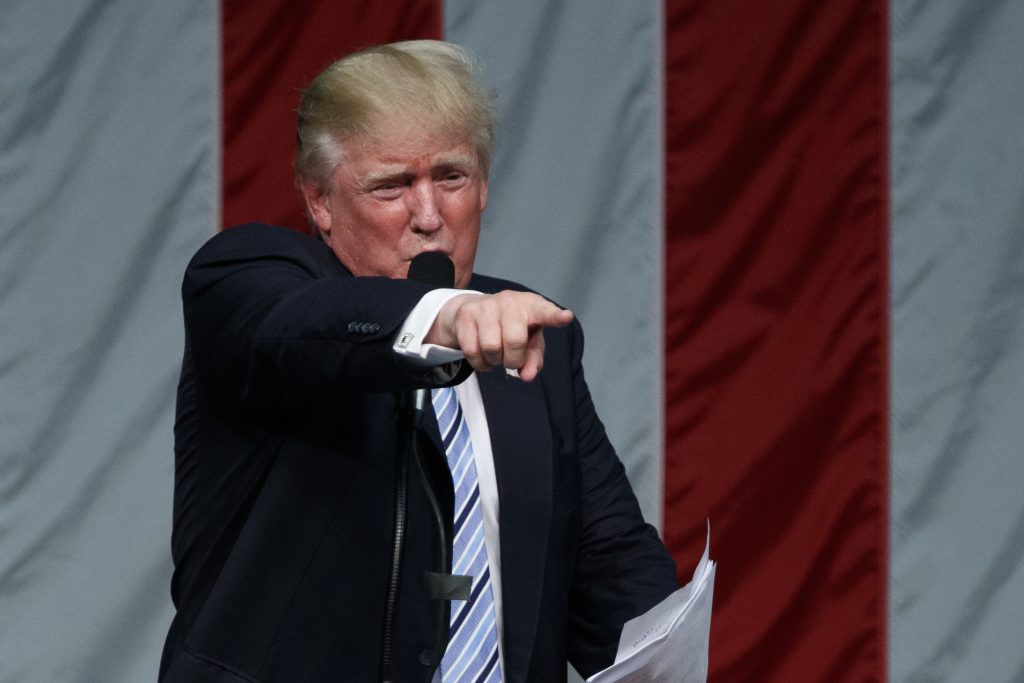 Donald Trump’s presidential campaign is taking even sharper aim at one of its biggest foes: the news media.

In recent days, Trump and his campaign have slammed the media harder than ever. The candidate labeled reporters the “lowest form of humanity” in Pennsylvania on Friday and claimed that the media is piling on him and doing the bidding of Democratic nominee Hillary Clinton.

Trump tweeted Sunday: “If the disgusting and corrupt media covered me honestly and didn’t put false meaning into the words I say, I would be beating Hillary by 20%.”

The barbs come after a week in which Trump asserted that President Barack Obama is the “founder” of the Islamic State terror group, a claim he intensified and then backed away from by deeming it sarcasm. He also appeared to encourage gun owners to take action if Clinton is elected and appointed judges who favor gun control.

Trump also saw his poll numbers drop — a Washington Post-ABC News poll released last Sunday showed that Clinton has widened her lead to eight points over Trump nationally. A Wall Street Journal/NBC News/Marist poll released Friday shows that Clinton has opened a wide lead over Trump in the battleground states of Colorado, North Carolina and Virginia. Trump also trails Clinton in Florida, according to the poll.

In an interview on CNN’s “State of the Union” that aired Sunday, Trump campaign manager Paul Manafort claimed the media, and interviewer Jake Tapper, deliberately didn’t cover a speech Trump made on economic policy last week and instead focused on attacking and undermining him. Manafort said that only local media covered Trump’s rallies in swing states the past week and that the media didn’t report on newly released emails that provided additional evidence that Clinton Foundation donors got access at the State Department. Clinton also made an economic policy speech in Michigan last week.

“The media chose to take her, Clinton — the Clinton campaign narrative — and go on attack on Donald Trump,” Manafort said. “Donald Trump in the course of this week was very substantive.”

Tapper said Manafort’s claims that CNN did not cover Trump’s economic speech or the release of the new Clinton emails are patently false.

Tapper pointed out that it wasn’t just the news media that questioned Trump’s claims about gun owners and Clinton, but also fellow Republicans and Trump supporters. Manafort chided him for covering that story for days and spending only one day on Trump’s economic policy speech.

“Mr. Trump bears no responsibility for his campaign being off-message?” Tapper asked.

Manafort said Trump’s point about the Second Amendment is that people who support gun rights should be concerned about Clinton’s candidacy.

“It was not meant at all to be a threat,” Manafort said.

Trump and Manafort took particular aim at The New York Times on Saturday and Sunday. The paper reported that Trump’s advisers are resigned to the fact that the candidate cannot stick to plans to change and to stop provoking others and that Trump’s mood in private is “sullen and erratic.” The paper also reported that Trump agonizes over his relationship with the media.

He tweeted Sunday: “The failing @nytimes talks about anonymous sources and meetings that never happened. Their reporting is fiction. The media protects Hillary!” and, “The failing @nytimes, which never spoke to me, keeps saying that I am saying to advisers that I will change. False, I am who I am-never said”

Manafort and campaign spokesman Jason Miller pushed back against reports that the campaign is in disarray.

“The campaign is moving to get forward and is very strong,” Manafort said, claiming that it has raised $132 million in two months and is organized in all 50 states.

Trump has barred a number of publications, including The Washington Post, from attending his rallies. At Saturday’s rally in Connecticut, he threatened to add The New York Times to the list. Speaking on CNN’s on Sunday morning, Miller was asked about Trump’s threat to revoke the credentials of The Times.

“We’ll see,” Miller said. He said the bans are in place because the campaign has to “stand up and defend ourselves” from biased reporting.

Miller said Trump’s rallies are open to members of the public who stand in line, including members of the media who are banned. That is not always the case; in June, a Trump campaign staffer and private security removed a Politico reporter who entered the rally with the general public. Last month, a Washington Post reporter was barred from entering an event featuring Trump’s running mate, Indiana Gov. Mike Pence, in Wisconsin. The Post reporter was patted down by police.

When asked by host Brian Stelter whether the campaign plans to lift the ban on media outlets, Miller said, “We want to see honest and unbiased reporting.”

Miller sounded a different note on the issue than Pence, who has said in the past that he would talk to the Trump campaign about lifting the ban on certain publications because he believes in a free press. On Fox News on Sunday, Pence was asked whether he has gotten Trump to change his mind about barring certain media outlets.

“We’ll keep our private conversations private, but that’s an ongoing discussion in the campaign, and I’ll — I do believe in the public’s right to know, whether it’s about these latest allegations about Hillary Clinton or otherwise, and we’ll continue that — we’ll continue to advance that principle,” Pence said.

Trump tweeted Sunday that his rallies aren’t covered correctly by the media:

“My rallies are not covered properly by the media. They never discuss the real message and never show crowd size or enthusiasm.”

A number of people at Trump’s rally on Saturday night, held in a stifling gymnasium on a college campus, walked over to the press pen and yelled at reporters. The same thing has happened in recent days at other rallies.