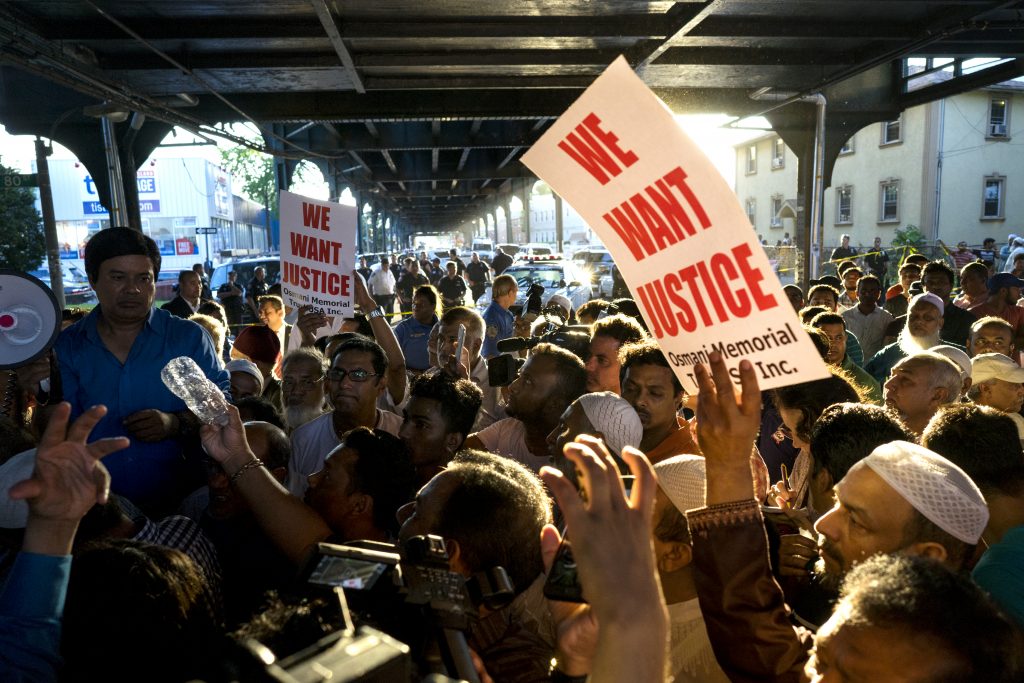 The daylight slaying of a mosque leader and his associate set off fear and anguish Sunday among Bangladeshi Muslims in the Ozone Park neighborhood of Queens, N.Y., with some saying the killings appear to be an anti-Muslim hate crime. But police said there is no evidence so far to support that.

Police hunted for the gunman who killed Imam Maulama Akonjee, 55, and Thara Uddin, 64, near the Al-Furqan Jame Masjid mosque in Queens as they left afternoon prayers Saturday in their traditional religious attire. Both men were shot in the head.

“This was a hate crime. One hundred percent, there’s no doubt about it,” said Monir Chowdhury, who worshipped daily with the two men.

He said he had moved to the community because of its large Bangladeshi immigrant population, but in recent months has been harassed by people shouting anti-Muslim epithets. In one incident, a man called him “Osama” as he walked to the mosque with his 3-year-old son. With the killer still on the loose, Chowdhury decided it would be best to drive to prayer services.

Police released a sketch early Sunday of a dark-haired, bearded man wearing glasses. Police said witnesses described the shooter as a man with a medium complexion.

Investigators said they have not established a motive in the attack. On Saturday, Deputy Inspector Henry Sautner said there was “nothing in the preliminary investigation to indicate that they were targeted because of their faith.” Akonjee was carrying about $1,000 in cash that was not taken during the shooting, police said.

On Sunday, neighbors in Ozone Park were skeptical of what police had found so far.

Chowdhury said he has felt the mood in the neighborhood change drastically in the last few months and accused Republican presidential nominee Donald Trump of spreading anti-Muslim rhetoric.

Trump’s campaign said in a statement that it was “highly irresponsible” to blame a political candidate for the violent attacks.

Mashuk Uddin just couldn’t believe it was true, shaking as he heard the news that his brother, Thara, a devout Muslim, had been gunned down.

Naima Akonjee, 28, one of the imam’s seven children, said she rushed to her parents’ home after the shooting. She said her father was a caring man who would call her just to check up on whether she had eaten properly.

Police said they were reviewing surveillance video showing the victims being approached from behind by a man in a dark polo shirt and shorts who shot them and then fled south on 79th Street with the gun still in his hand.