Vladimir Putin summoned his security council and the Russian Navy announced war games in the Black Sea, a day after the Russian president accused Ukraine of trying to provoke a conflict over Crimea, which Moscow seized and annexed in 2014.

The belligerent posture heightened worries in Ukraine that Russia may plan to ramp up fighting in a war between Kiev and pro-Russian eastern separatists that had been de-escalated by a shaky peace process.

Using some of his most aggressive rhetoric against Kiev since the height of the war two years ago, Putin has pledged to take countermeasures against Ukraine, which he accused of sending saboteurs into Crimea to carry out terrorist acts.

Ukraine has called the accusations false and says they look like a pretext for Russia to escalate hostilities. Such an escalation could be used by Putin to demand better terms in the Ukraine peace process, or to inflame nationalist passions at home ahead of Russian parliamentary elections next month.

The Russian leader met his top military and intelligence service brass on Thursday and reviewed “scenarios for counterterrorism security measures along the land border, offshore and in Crimean air space,” the Kremlin said.

Ukraine President Petro Poroshenko said he had ordered all Ukrainian units near Crimea and in eastern Ukraine onto the highest state of combat readiness. He was seeking to urgently speak to Putin, the leaders of France and Germany, U.S. Vice President Joe Biden and European Council President Donald Tusk. 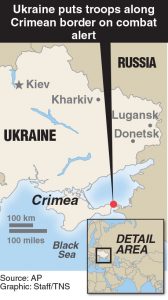 Oleh Slobodyan, a spokesman for the Ukrainian border guards, said Russia had massed troops on Ukraine’s border with Crimea in recent days following an uptick in Russian military activity in northern Crimea and heavier fighting in eastern Ukraine.

“These troops are coming with more modern equipment and there are air assault units,” he told a news briefing in Kiev.

The Russian Defense Ministry said its navy – whose Black Sea Fleet is based in Crimea – would start to hold exercises in the area to practice repelling underwater attacks by saboteurs.

Russia says it caught the infiltrators after at least two armed clashes on the border between Crimea and Ukraine over the weekend, and one of its soldiers and an FSB security service employee were killed. Kiev denies the events ever happened.

Whatever the truth, the allegations have already scuppered planned talks about eastern Ukraine slated for the sidelines of a G20 summit in China next month. Putin said such talks would now be “pointless.”

In an editorial, the Russian newspaper Vedomosti said escalation was a proven Kremlin tactic ahead of negotiations. Putin was trying either to alter or to tear up the Minsk peace process, named for the Belarus capital where truces were hammered out for the war in eastern Ukraine’s Donbass region.

“Events in Donbass in 2014-15 showed that the Kremlin tactic is to raise the stakes before negotiations. The main political question now is what will happen to the Minsk process. Will Russia break away from it or will it demand new concessions?” the newspaper wrote.

“Putin in his rhetoric has returned to the start of 2014. Once again, he does not deem the Ukrainian authorities legitimate.”

Volodymyr Fesenko, a political analyst in Ukraine, said he thought the Kremlin had its own revised peace plan for eastern Ukraine up its sleeve.

“Putin will scare the West with the prospect of full-scale conflict with Ukraine,” he said. “He is trying to increase pressure on Kiev to force Ukraine to accept a Russian plan to resolve the conflict in the east.

“Putin won’t go all out for a big war. But there might be pinpoint military operations against radicals whose bases are located near the border with Crimea.”

The European Union and the United States have tied the success of talks under the Minsk process to any possible decision to lift financial sanctions imposed on Russia over the Ukraine crisis. But Moscow has grown increasingly frustrated by the talks and by what it says is Ukraine’s refusal to fulfil the terms of the truce. Kiev for its part says Moscow is the one that is still stirring tensions among pro-Russian separatists.

Escalating tension over Crimea could give Putin a pretext to abandon talks altogether, or demand changes to their format and terms, while holding out the prospect of a full-scale renewal of hostilities if he doesn’t get what he wants.

It could also help rally Russians ahead of the parliamentary vote, in which the main pro-Kremlin United Russia Party might have to struggle to win as many votes as usual because of an economic slump caused by low oil prices as well as the sanctions.

“While polls show United Russia doing okay (60-percent support), Putin never likes to take chances with domestic politics,” Timothy Ash, a strategist at Nomura Bank, wrote in a note. “(He) will want to impress on the Russian electorate his own strength and how lucky they are to be Russian citizens as perhaps compared to their Ukrainian counterparts.”

The imbroglio also gives Crimea’s pro-Russian authorities an excuse for their failure to raise living standards since Russia took over. Sergei Aksyonov, the Russian-backed prime minister, told state TV he blamed the Ukrainian incursions on the U.S. State Department.

Putin may also hope instability in Ukraine can feed into the U.S. presidential election campaign, where Republican Donald Trump accuses President Barack Obama’s administration of incompetence and has called for better ties with Moscow. Putin may yet hope to cut a deal on both Ukraine and Syria, the two big issues of contention with Washington, before Obama exits.

What actually happened in and around Crimea at the weekend remains disputed. U.S. ambassador to Ukraine Geoffrey Pyatt said Washington had so far seen nothing to corroborateRussia’s version. A spokeswoman for EU foreign affairs chief Federica Mogherini also said there had been no independent confirmation.

Russia’s Kommersant newspaper on Thursday cited unnamed security sources as saying a group of men Russia had arrested for planning attacks had confessed to seeking to destroy Crimea’s tourist industry by bombing resorts.

The sources told Kommersant that two of seven saboteurs in one group had been killed and five captured. Most were Crimea residents and some had Russian passports, they said.

In Ukraine, the brother of one of the detained men said he thought his brother had been kidnapped as part of “a big game.”