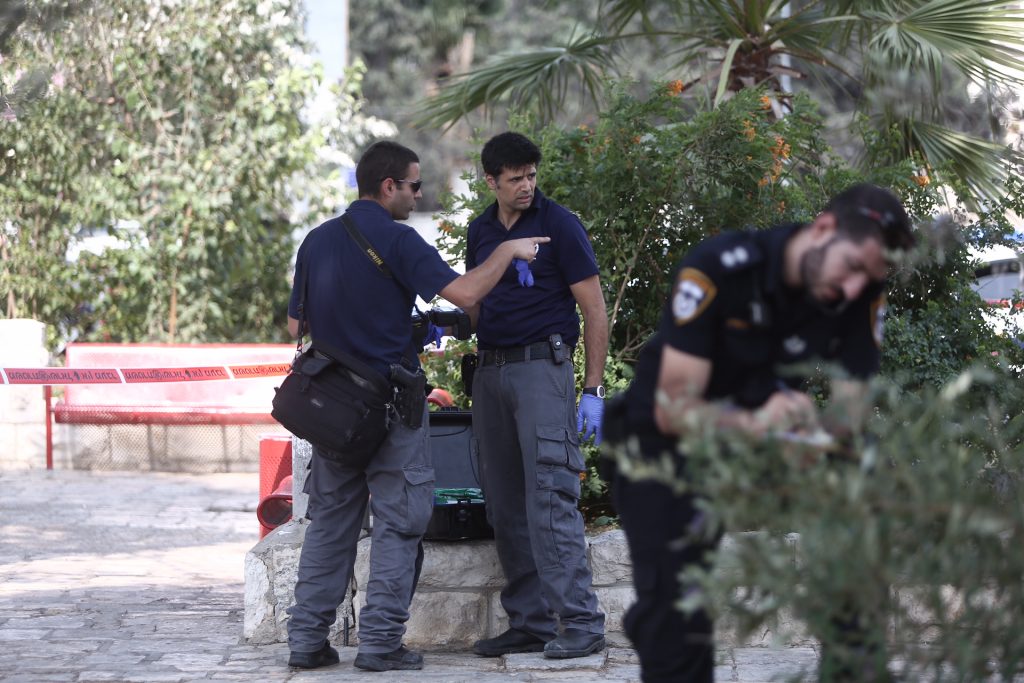 A terrorist stabbed an Israeli in the a-Tur neighborhood of Yerushalayim, near Har Hazeisim, Thursday afternoon. The victim was in light to moderate condition. He was treated at the site and then taken to the Hadassah Har Hatzofim hospital in a stable condition and conscious. The stabber, who attacked the victim with a screwdriver, fled the scene.

The 18-year-old yeshivah student told police forces that he was returning from davening at the kever of the Nesivos Shalom of Slonim, zy”a, on Har Hazeisim – on the day of the Rebbe’s yahrtzeit – when he was suddenly stabbed and wounded in the torso.

Police said the young man, who was heading toward the bus stop on Har Hazeisim, was pushed to the ground and stabbed in the back and neck.

The wounded man boarded a bus that drove to the nearby police stationed in the area and the Border Police post near Beit Hachoshen, where he got off and reported the incident to the officers. They gave him initial medical treatment and called Magen David Adom to provide him with further care, as well as additional police forces to search for the terrorist.

Police spokesman Micky Rosenfeld said that a wide range of units, including Border Police and Special Patrol Units, have set up road blocks to capture the suspect.

“Heightened security will continue in the area until we apprehend the attacker,” he said.

The police announced earlier this week that they will open new stations in Arab neighborhoods. The plan will see 1,200 new officers hired and deployed in Ras al-Amud, Jabel Mukaber, Silwan, Issawiya and Sur Bahet, none of which are currently patrolled on a regular basis.

Along with the increased police presence, police intend to install hundreds of surveillance cameras in the Arab neighborhoods, similar to the system in the Old City, where nearly every square inch is under surveillance. The camera system will enable police to keep a low profile and avoid inflaming the situation, while allowing them to respond as needed to emergencies.

Overnight Wednesday IDF troops operating in the area of the village of Samoa near Chevron discovered numerous weapons that had been manufactured in the village. The weapons were confiscated and several suspects arrested.

Also overnight, security officials said they arrested 12 wanted security suspects in other areas in Yehudah and Shomron. The suspects were wanted for participating in rioting and throwing stones and firebombs that endangered Israeli civilians and IDF soldiers. Several of the suspects were also charged with belonging to Hamas. All are being questioned on their activities by security forces.