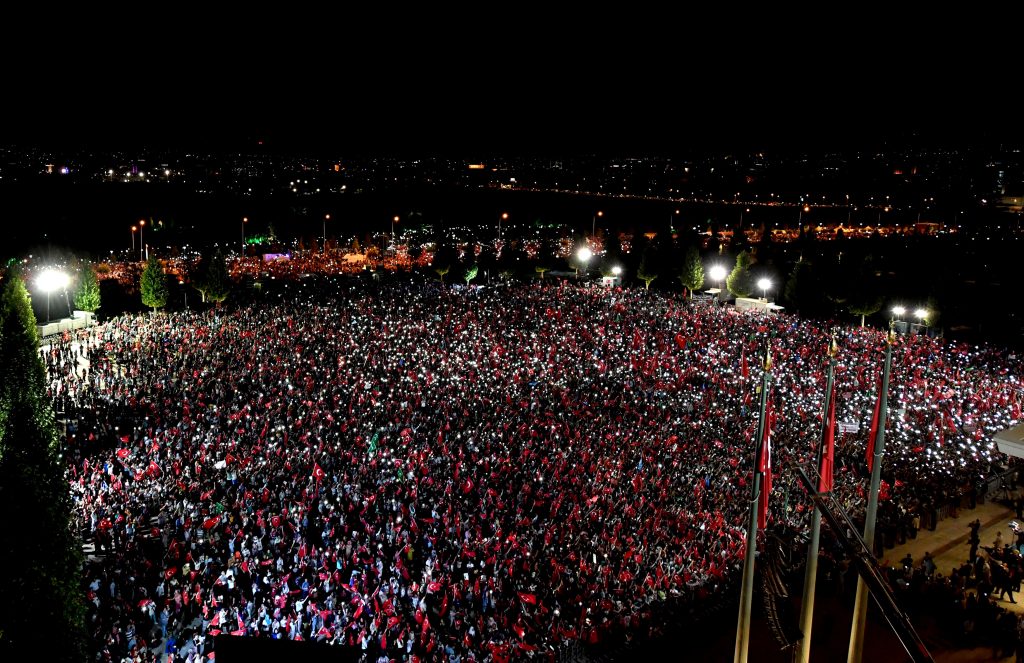 Turkish President Recep Tayyip Erdogan urged a group of businessmen on Wednesday to inform authorities about companies or businesspeople they suspect of supporting a U.S.-based Muslim cleric accused of orchestrating Turkey’s failed July 15 coup, saying they deserved “no pity.”

The statement was likely to fan concerns over Turkey’s large-scale crackdown on followers of the cleric, Fethullah Gulen, and raise questions over whether the government would start a witch hunt based on an army of informants.

“You may have friends from the community,” Erdogan told a group of Turkish exporters. “I say you have to expose them. You have to inform on them to prosecutors and the police. Why? This is our patriotic duty.

“In the same way that we are removing the [Gulen organization] from the armed forces, the judiciary, the police, we have to remove them from the business world,” Erdogan said. “We have no right to show pity toward those who showed no mercy to their country or people.”

The government launched a sweeping crackdown after the coup, targeting followers of Gulen, whom it accuses of orchestrating the attempted putsch that left more than 270 dead.

Some 16,000 people have been formally arrested in connection to the coup, while thousands more have been detained for questioning. Tens of thousands of people with suspected links to Gulen have also been suspended or dismissed from their jobs in the judiciary, media, education, health care, military and local government.

Turkey has designated Gulen’s movement a terror organization and wants him extradited from the United States to face trial. Gulen, who runs a network of charities and schools worldwide, has repeatedly denied involvement in the coup.

Later on Wednesday, Erdogan addressed hundreds of people who gathered on the grounds of his presidential palace in Ankara and reiterated Turkey’s demand that Gulen be extradited.

“Sooner or later the United States will make a choice: either Turkey or [Gulen]; either the coup-plotter terrorist [Gulen] or Turkey, the country of democracy, it has to make a choice,” Erdogan said. “The United States can no longer harbor this oppressor, this charlatan, and will send him back.”

He was addressing crowds that had gathered for the final of the daily rallies that have been staged across the country to denounce the attempted overthrow. His speech was broadcast live at a similar rally in Istanbul, attended by some 3,000 people.

Responding to chants from the crowd demanding the death penalty for the coup-plotters, Erdogan again said he would approve any parliamentary decision to reinstate capital punishment.

The scope of the crackdown on the movement has raised alarm in European countries and among human rights groups, which have urged restraint. Erdogan has lashed out at the criticism and has complained of a lack of solidarity and support from allies for the elected government.

Speaking to the exporters, Erdogan urged the businessmen to inform “prosecutors and police” on Gulen supporters they know, and to inform business contacts abroad that the Gulen movement was “not only a threat to our country but to the whole world.”

Presidential spokesman Ibrahim Kalin said Erdogan’s call was directed at businesses that had provided financial support to the group.

“Members of the [Gulen movement] are present in all sectors of society. They were organized within the business world as well. The most important resource that fed this organization were businesses. They engaged in extortion. Some gave money willingly,” Kalin said.

Kalin said Erdogan’s call was intended to ensure that the business world “was put on alert” against Gulen’s movement.

He said the West had failed to understand the “violence and the gravity of the coup.”

“There is an illegal organization and authorities are taking measures within the business world, the military, the police and the judiciary so that [a coup attempt] cannot happen again,” Kalin said.