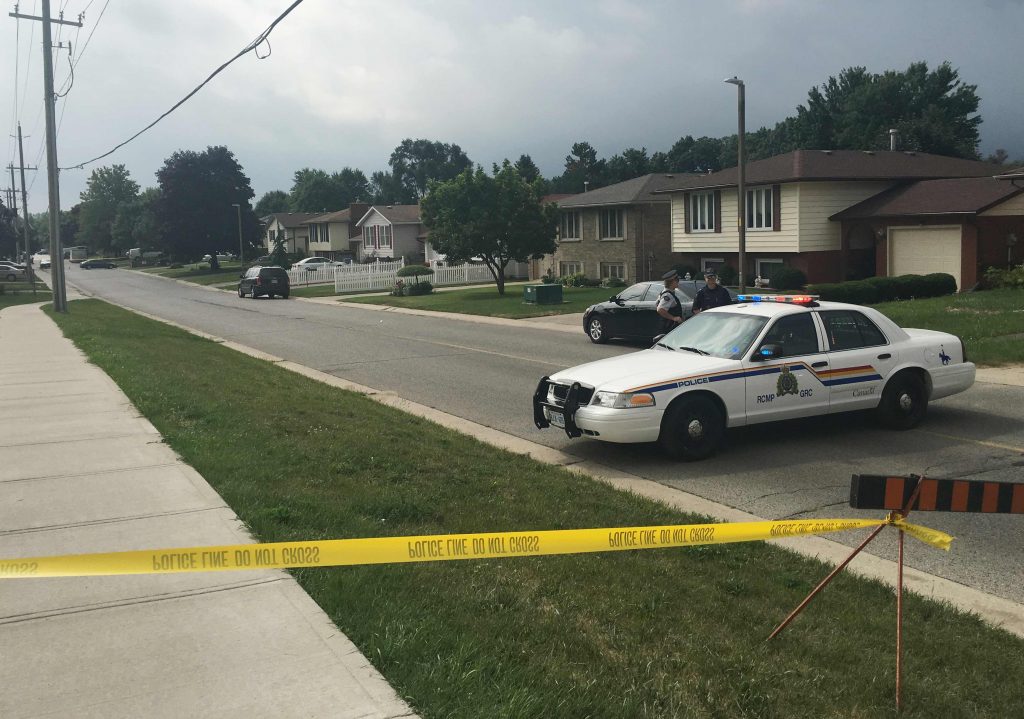 A Canadian man killed by police on Wednesday had indicated he planned to carry out an imminent rush-hour attack on a major Canadian city, drawing the attention of the U.S. authorities who tipped off Canadian police, intelligence sources said.

Aaron Driver, a Canadian man previously banned from associating with Islamic State terrorists, prepared a martyrdom video and was about to commit a terror attack but was killed Wednesday after he detonated his explosive device in a taxi and was shot at by officers who say they thwarted the plot. Police say they were tipped off by the American authorities who provided a screen shot of the masked suspect threatening a terror attack early Wednesday morning, police said.

The man was killed on Wednesday during a police raid in a small Ontario town, the Royal Canadian Mounted Police (RCMP) said, but did not give further details. The National Post newspaper said that he had detonated a bomb at the home and was about to detonate another when he was shot dead.

Intelligence sources identified the dead man as Aaron Driver, who was arrested last year for openly supporting the Islamist group Islamic State on social media and had been placed under a court order earlier this year restricting his movements.

The FBI alerted Canadian authorities early on Wednesday that an individual was engaged in potential terrorism-related activities, the sources told Reuters. The sources declined to be identified as they did not have permission to speak to media.

One source said the FBI did not know the identity of the man and sent a wide notice across Canada about the potential threat. A second source said the Canadians then realized it was Driver and deployed to the home in Strathroy, Ontario where he had been living.

“We can confirm a police operation took place in Strathroy yesterday, where a suspect was fatally shot by our officers,” RCMP spokeswoman Annie Delisle said in an email.

“The RCMP and our partners have been working overnight at securing the scene and to gather the evidence to advance/further the investigation.” Strathroy is a town of about 21,000 inhabitants some 225 km (140 miles) southwest of Toronto.

The National Post cited Driver’s father, Wayne Driver, as saying the RCMP had told him that a taxi driver was wounded in a bomb set off by his son during the raid and that by shooting him the police prevented the detonation of a second bomb.

A representative from the local Leo’s Taxi Transportation Ltd. said a cab had been dispatched to Driver’s address on Wednesday night before he was shot by police.

The representative, who declined to be identified, said the taxi driver was injured in the incident, but has since recovered.

There were no details yet of what kind of attack Driver, who also used the alias Harun Abdurahman, had allegedly been planning. Driver, 24, was a Muslim convert who was described as a “passive individual” by his former lawyer.

The Toronto Transit Commission (TTC), which serves the city, and the regional operator GO Transit confirmed they were contacted by police early on Wednesday

TTC spokesman Brad Ross said there was no specific threat made and there was nothing to indicate the transport agency was a target, but the TTC sent out a “vigilance notice” to all of its employees. GO Transit spokeswoman Alex Burke referred further questions to the RCMP.

Driver had not been charged with a crime. But in February he was placed on a peace bond, a court order that restricted his movements, required that he stay away from social media and computers and not have contact with Islamic State or similar groups.

It was not clear how he was able to make alleged plans for an attack given the authorities had him on their radar.

It was also not yet known what action triggered FBI concern.

The incident was the first security test for Prime Minister Justin Trudeau, who was elected in October 2015 and who in February fulfilled a campaign pledge to withdraw Canada from the combat mission against Islamic State and to increase its mission training local fighters against the group in northern Iraq.

Public Safety Minister Ralph Goodale said in a statement late on Wednesday that the public had been “properly protected” after the RCMP received “credible information regarding a potential terrorist threat,” and that he had briefed Trudeau.

He said Canada’s National Terrorism Threat Level remained at “medium,” the level it has been at since the fall of 2014.

In 2014, Canada was stunned by two deadly attacks that police said were the work of homegrown radicals and that led to tougher new anti-terrorism measures. A gunman killed a soldier at Ottawa’s national war memorial before launching an attack on the Canadian Parliament in October 2014 while, in the same week, a man ran down two soldiers in Quebec, killing one.

Driver had expressed support for the Parliament gunman, Michael Zehaf-Bibeau, on Twitter, which was how he first came to the attention of Canadian security officials.

In March last year, Canada said it had foiled a plot by a self-proclaimed Islamic State supporter to bomb the U.S. consulate and other buildings in Toronto’s financial district.

Canada saw a big jump in terrorism offences last year with 173 alleged incidents, up from 76 in 2014, according to July data from Statistics Canada, which cites police information.

There were 62 instances of people being accused of participating in what the agency described as “activity of terrorist group” in Canada, up from 26 in 2014, and 28 alleged cases of people trying to leave the country to do so, up from seven in 2014.