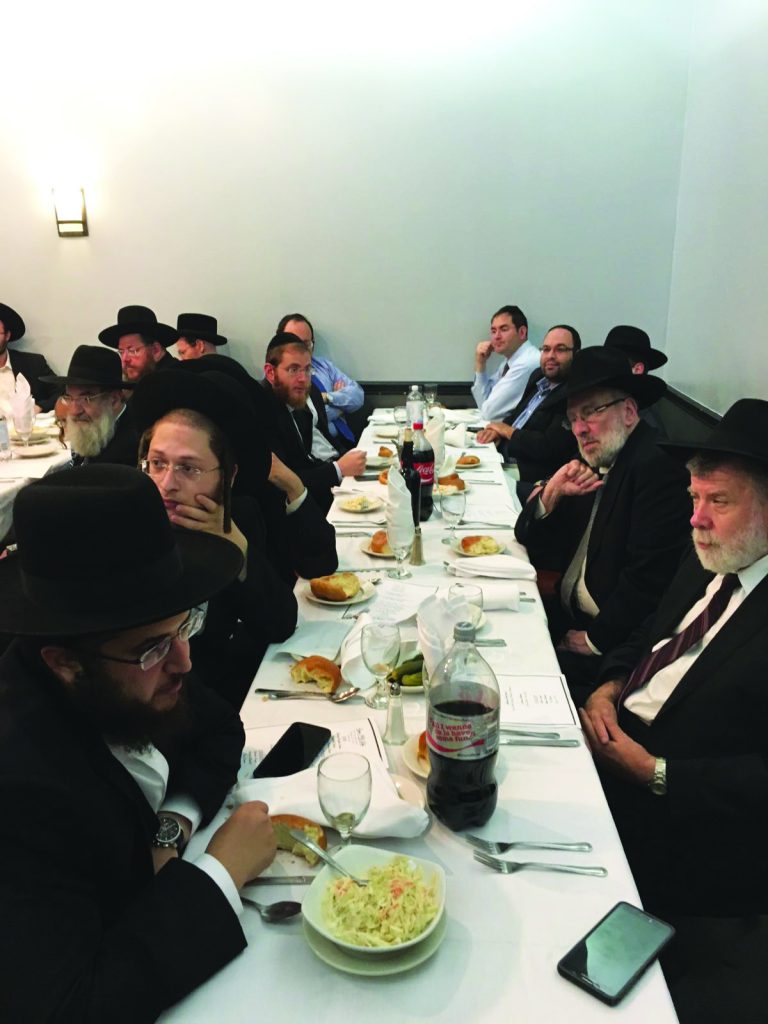 On Monday evening, 26 Tammuz/August 1, a yahrtzeit seudah and siyum took place marking the 89th yahrtzeit of Harav Pinchos Aharon Bruder, zt”l. The gathering, which took place at Essen Deli in Flatbush, brought together fifth-, sixth- and seventh-generation descendants of this great tzaddik, many of whom met for the first time, and who participated in the learning and completion of Shishah Sidrei Mishnah.

Rav Pinchos Aharon Bruder was born in 1834, in Bardejov in the Czech Republic, to Reb Yaakov and Devorah Bruder, zichronam livrachah. His parents originally lived in Frankfurt but relocated due to persecution of Yidden there. In Bardejov, he became close to the numerous Shinever Chassidim there and became a Shinever Chassid himself.

After Rav Pinchos Aharon had married, he served as a shochet in Stropkov, where the Shineve Rav, zy”a, Harav Yecheskel Shraga Halberstam, then resided. At that time, in the late 1800s, the Rav was told by his Chassidim in America that there was a need for a reliable shochet. The Rav requested Rav Pinchos Aharon Bruder to emigrate there to serve in that capacity, blessing him that he would have generations of ehrlicher, frum Yidden. As a staunch Chassid, he followed his Rebbe’s directive to go, to be followed by his wife and children later.

However, Rav Pinchos Aharon’s older daughter, Tzurtel, had married Reb Moshe Weberman, whose father recoiled at the idea of his son and daughter-in-law relocating to America and forbade them to emigrate in his lifetime. Around a decade later, after he was niftar, Moshe and Tzurtel joined the rest of the family, who had settled on the Lower East Side of Manhattan.

The Shinever Rav’s brachah was fulfilled many times over as, at present, there are thousands of American descendants of Rav Bruder, who reside in New York, Miami, Los Angeles, Toronto and other cities. These include the Belsky, Wilhelm, Weberman, Septimus, Dicker, Fensterheim, Jacobs, Lewittes, Hershkowitz, Kranz and Bloom families, among many others.

Some have been instrumental in building Yiddishkeit in America such as Reb Binyomin Wilhelm, who married the Webermans’ daughter, and his brother-in-law Rabbi Ben Tzion Weberman, who co-founded Yeshiva Torah Vodaath and were very active in Torah causes. Harav Yisroel Belsky, zt”l, one of the pillars of Torah of this generation, was a grandson of Reb Binyomin.

Mr. Harold Jacobs, who was a grandson of Rav Pinchos Aaron’s daughter Chana Fried, was the President of both the National Council of Young Israel and the Orthodox Union, which were just two of the dozens of Jewish organizations in which he played a leadership role.

The idea for the event came about when Reb Beryl Septimus read an article about Rav Pinchos Aharon around Pesach and started contacting other family members via social media and word-of-mouth regarding a yahrtzeit gathering. The result was the attendance of dozens of relatives who were physically present at the siyum and dozens more who joined via teleconference.

The gathering was opened by Rabbi Pinchos Aharon Weberman of Miami, who joined via conference call. The siyum was conducted by Reb Judah Septimus. The new cycle of Mishnayos was begun by Reb Pinchos Aharon (Paul) Jacobs of Toronto, also via conference call. Rabbi Lazer Rappaport, Menahel of Yeshivah Torah Temimah, spoke next. Rabbi Yitzchak Belsky was honored with leading Birkas Hamazon.

Among the points discussed by Rabbi Rappaport and others was that, while the well-known expression “the wandering Jew” carries the negative connotation of being a stranger in strange surroundings, there is a benefit therein. A Yid can lift up latent sparks of kedushah wherever he is and have an impact there. Who could have foreseen that when Rav Pinchos Aharon Bruder left Europe to come to America, where many Yidden left the fold of Yiddishkeit, 140 years later he would have thousands of descendants, loyal to Torah, many of whom would unite to make a siyum l’iluy nishmaso?

Rav Pinchos Aharon would not compromise one iota in his Yiddishkeit. He served as a Maggid Shiur and brought many Yidden closer to Torah. A tremendous masmid, even at a very advanced age he would come to the beis medrash to learn.

Future gatherings are planned through which to carry on the legacy of Rav Bruder.