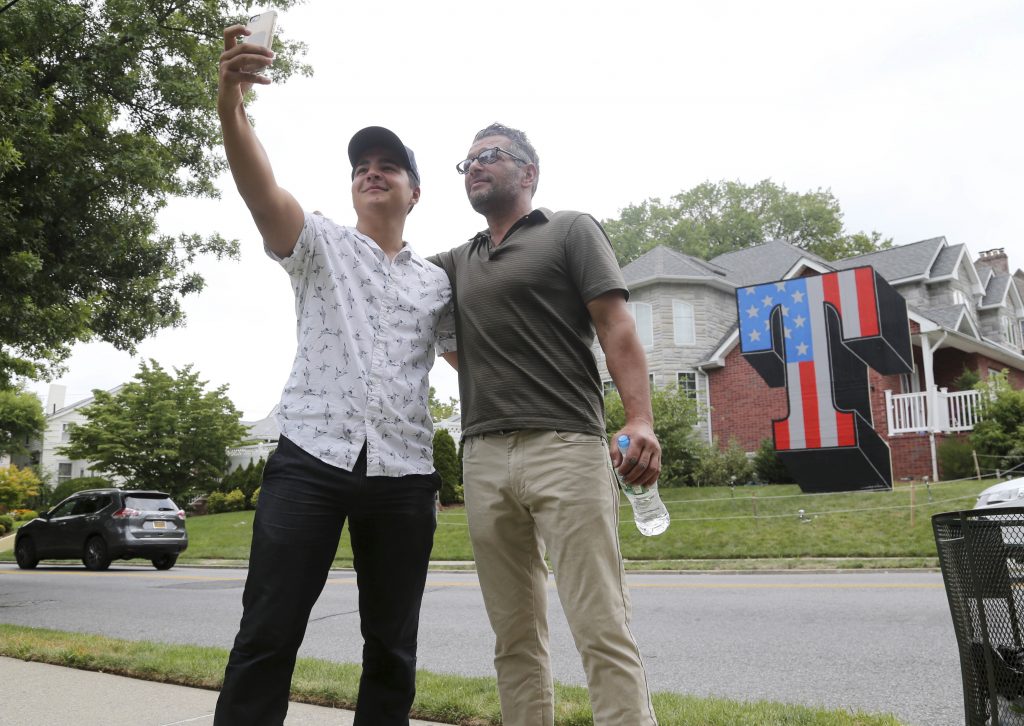 A huge red-white-and-blue letter T with an American flag theme in tribute to Republican presidential nominee Donald Trump has risen on a lawn days after a smaller one was torched there.

Trump supporter Sam Pirozzolo stood proudly Wednesday on his front lawn in Staten Island by the 16-foot-high letter, almost as tall as his house.

The T, ringed by a fence, is painted in latex on foam insulation with a wooden support frame. The few surviving pieces of the original T are still charred black.

Investigators are trying to determine who sneaked up under cover of darkness and set fire to artist Scott LoBaido’s original 12-foot-high T on Sunday, about three months after it was installed. Pirozzolo blames “pro-Hillary Clinton thugs.”

Pirozzolo was awakened at about 1 a.m. when a passing motorist knocked on his door to alert him about the fire. He rushed out as the Trump tribute was going up in flames, “and the first thing that came to my mind was, ‘Oh, my G-d, this is like the Ku Klux Klan burning a cross on my lawn, telling me that I have to shut up.’”

Instead, Pirozzolo, a 52-year-old optician, and the artist set to work the next day, assembling another installation.

Pirozzolo said Trump called him on Monday, thanking him and LoBaido for their show of support. Pirozzolo’s wife and two teenage kids listened in.

On Wednesday, passing motorists honked and shouted their approval.

The new T “is a symbol of the freedom of speech that we have that’s been taken away from us,” said Tina Matula, a 39-year-old Republican and Staten Island native now living in Sayreville, N.J.

She said she had her two young daughters with her to teach them they have the right “to be able to express how you feel politically.”