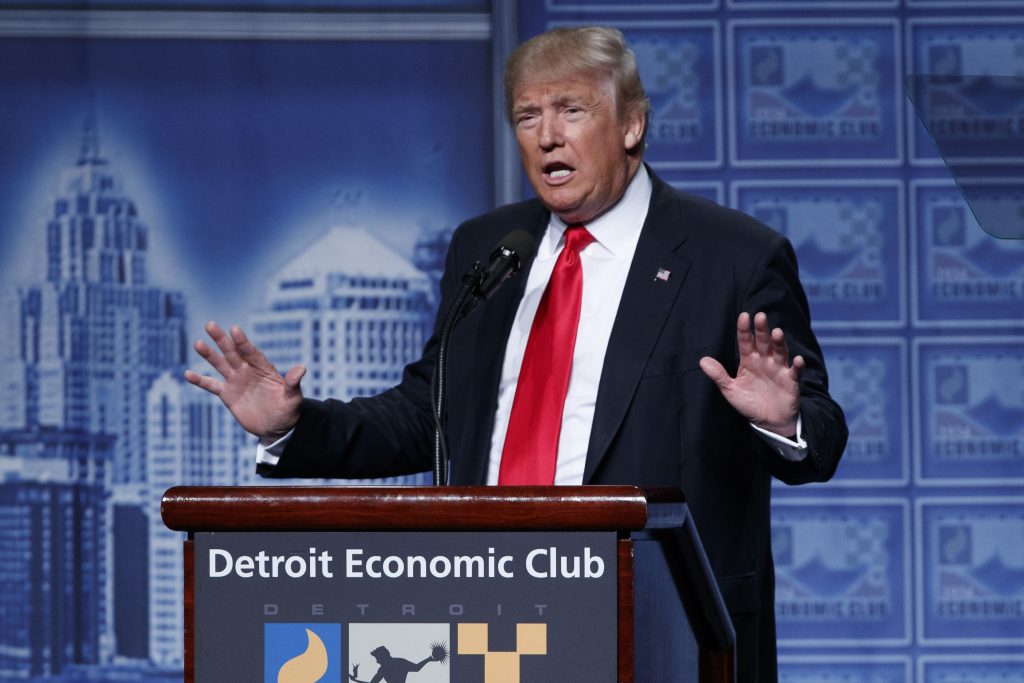 Donald Trump is seeking to quell concerns he lacks the discipline or policy know-how to make a competent president, even as the list of fellow Republicans deeming him unfit for the Oval Office grows.

Maine Sen. Susan Collins, a moderate long wary of Trump, became the latest Republican to announce her intent not to vote for her party’s nominee. Days after rebuking Trump for insinuating Somali refugees in Maine were dangerous, Collins said late Monday she’d thought “long and hard” about whether she was obligated to support the GOP nominee and decided she could not.

“With the passage of time, I have become increasingly dismayed by his constant stream of cruel comments and his inability to admit error or apologize,” Collins wrote in a Washington Post op-ed.  Collins wrote that she supports neither party’s nominee, though previously she’s said she’s open to voting for Hillary Clinton.

The defection from a respected senator added to a chorus of GOP voices insisting they can’t back Trump. Some 50 Republican former national security officials signed an open letter calling Trump the most reckless candidate in history, prompting a counterattack from Trump, who said the signers share blame with Clinton for making the world “a mess” and fueling the Islamic State terror group’s formation.

“We thank them for coming forward so everyone in the country knows who deserves the blame for making the world such a dangerous place,” Trump said in a statement.

The renewed focus on GOP discord was not the theme Trump hoped to emphasize. The GOP nominee had tried in a major policy speech at the Detroit Economic Club to turn the page on a dreadful stretch in his campaign by unveiling a revamped economic plan centered on far-reaching tax cuts.

Clinton quickly dismissed Trump’s proposal, which would reduce to three the number of income tax brackets and cut corporate taxes to 15 percent. She accused Trump of offering “super big tax breaks” to huge companies and rich people and disputed his claim that she wanted the middle class to pay more.

“I have said throughout this campaign I am not going to raise the taxes on the middle class, but with your help we are going to raise it on the wealthy,” Clinton said at a Monday rally in the battleground state of Florida.

The two candidates were headed toward a trio of broadcast showdowns. Late Monday, Clinton’s campaign chairman announced she would take part in all three debates that the Commission on Presidential Debates is organizing. Trump has said he wants to debate Clinton but has complained that two of the debates are scheduled during sports games, claiming Democrats “rigged” the schedule.

Clinton, working to shore up a path to victory in the Electoral College, was focusing intently on Florida. She planned to tour a Miami health clinic Tuesday to discuss the Zika virus before holding fund-raisers in the evening.

Trump, too, had his eye on the most competitive states. A day after campaigning in Michigan, the real estate mogul planned a pair of rallies in North Carolina.

Debates and tax policy were just a few areas where the White House hopefuls were trading accusations. On Monday evening, Trump wrote on social media that “many people are saying that the Iranians killed the scientist who helped the U.S. because of Hillary Clinton’s hacked e-mails,” referring to an Iranian nuclear scientist executed for spying for the U.S.

Clinton’s spokesman wrote back that Trump was making it up.

In his economic speech, Trump revised his previous tax plan increasing the rate he said the highest-earning Americans should pay. He also unveiled a new proposal to allow parents to fully deduct the average cost of child care from their taxable income, while insisting that when he’s president, “Americanism, not globalism, will be our new credo.”

Though Trump argues his “America First” policies will return the economy to the boom era of a half-century ago, his vision sidesteps massive changes that have since occurred in the global economy. The United States faces far more overseas competition now than after World War II, and manufacturing expenses for many goods are higher in the U.S. than in Asia, where wages are generally lower.

Characteristically short on details, Trump said little about how he would equip American workers to succeed, nor about how returning manufacturing to the U.S. could prove costly for American consumers.