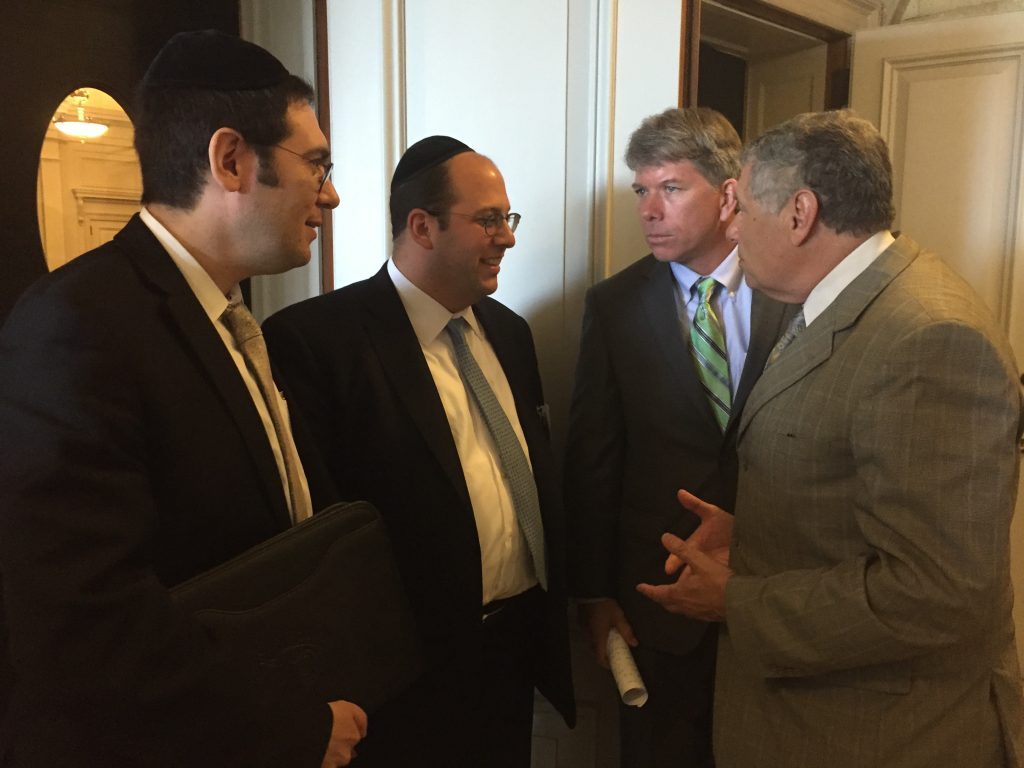 Busing for Lakewood’s schoolchildren is safe for the next three years.

Gov. Chris Christie signed a game-changer bill into law Tuesday noontime funding a critical busing service for thousands of Lakewood students who live too close to school to be eligible for state busing but must cross dangerous roads to get to school.

“No matter what school they attend, public or nonpublic,” Christie said in a statement, “all children in New Jersey should be able to travel safely between their home and school.”

The law sets out a three-year pilot program in a township with an unusually large percentage of students attending private school. Instead of providing busing directly from the state, it establishes a budgeting rule known as “aid in lieu of transportation.”

For the estimated 10,000 public- and private-school students who live in locations that do not have bus routes, the Department of Education pays the family $884 in place of mandatory busing. The state effectively canceled busing for all of Lakewood’s non-public school students and instead will pay the sum to a central fund. That fund will be administered by a board under the supervision of the state commissioner who will be free to negotiate independent contracts with bus companies.

In a statement, the group said, “We are so grateful for the understanding shown by the members of the Senate and Assembly of how badly Lakewood has been shortchanged by the existing State Aid formula. We would like to particularly acknowledge and thank Governor Christie, Senate President Steve Sweeney, Assembly Speaker Vincent Prieto, and Assemblyman Gary Schaer, for their support of this bill and for their efforts to ensure the safety of our children.”

With this solution for the nonpublic schools in hand, township officials say they would be able to finalize a plan to preserve all busing services for the far smaller public school population as well, a key element of the plan behind such legislation.

An additional advantage of the arrangement would be that the working groups will be free to make multi-year contracts, something the Board of Education is prohibited from doing. It is estimated that under this plan, enough of a surplus will exist to cover courtesy busing as well for all students.

As part of massive budget cuts made several months ago to close a $12 million deficit, non-mandatory busing for children living within 2 1/2 miles of their schools was totally eliminated for the school year beginning next month. However, local officials and activists felt that the cost, safety risks and congestion that would be caused by slashing the service would be too serious for the township to handle.

The state orders local towns to provide busing to all students who live far from their institute of education, typically about 2 miles. They also allow local governments to decide based on local conditions if other students should also get busing. This program, called “courtesy busing” has long been an accepted part of Lakewood, which has dangerous roads running alongside residential areas.

But the program’s costs rose these past few years, as Lakewood’s nonpublic school population rose significantly. The state has threatened to cancel it several times but backed off at the last minute. This upcoming year was the first time it appeared that the program vital to local families was seriously in jeopardy.

Christie, a Republican, said that he understands the “unique transportation challenges” confronting Lakewood, where the vast majority of students attend nonpublic schools, “and but for a robust courtesy busing program, many of these students would have to cross dangerous and crowded intersections to get to and from school.

“This bill ensures all nonpublic school students can get to school safely, while easing the financial burden on the district in providing courtesy busing to address its unique safety concerns,” he said.