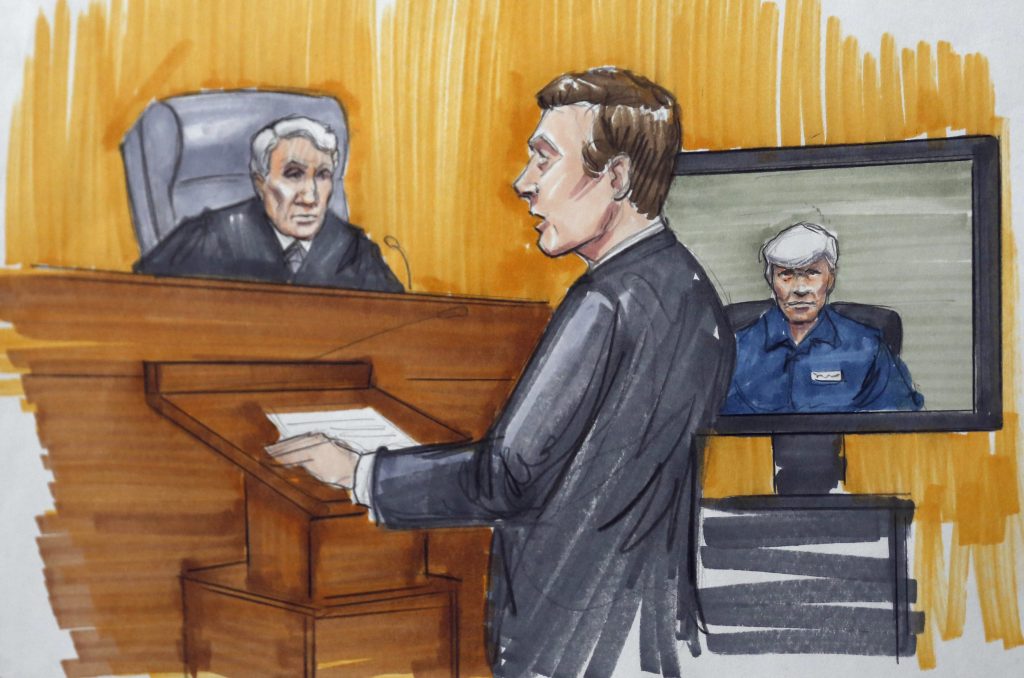 A federal judge on Tuesday upheld Rod Blagojevich’s 14-year prison sentence on corruption counts, setting aside pleas for leniency by the former Illinois governor’s wife and daughters during his resentencing hearing.

As the judge announced his decision, Blagojevich could be seen on screen bowing his head. In the courtroom, his two daughters sobbed, the youngest placing her head on her mother’s shoulder.

Blagojevich, known as Inmate No. 40892-424 since he went to prison in 2012, appeared on a courtroom video in prison-issued clothing, his once-dark hair now white. He was eligible for resentencing after an appeals court threw out some convictions related to his alleged attempt to sell or trade an appointment to President Barack Obama’s old Senate seat.

The Democrat appeared on a courtroom screen through a video from a Colorado prison, his first public appearance since entering prison.

“I think I’m a very different person and I think I’ve become someone who has learned a lot from the mistakes I have made,” he told the judge, adding that he takes responsibility for his actions and is working to make amends.

Federal prosecutors said the dismissal of the five counts doesn’t reduce the seriousness of Blagojevich’s offenses and argued the sentence shouldn’t be reduced.

The former governor wiped tears from his eyes as his daughters took the stand.

His youngest daughter, 13-year-old Annie, told the judge she almost didn’t want to grow up because she wants to wait for her father to come home. His older daughter, 20-year-old Amy, said “my dad used to be my best friend” and “he’s never given up on us and we will never give up on him.”

As governor, Blagojevich was famously fastidious about his dark hair. Hair dyes are banned in prison, and his hair now is noticeably white.

Blagojevich had asked Zagel to sharply reduce his sentence on the upheld convictions. Prior to Tuesday, Blagojevich’s projected release date was 2024, factoring in two years of credit for good behavior.

Blagojevich’s attorney, Leonard C. Goodman, told the judge that “the arrogance and anger are no longer present in this man” and that he’s “been a model inmate.”

“We are here to take a fresh look,” Goodman said. “What I suggest is the case you have before you today is significantly different from the case in 2011.”

In her two-page letter, she described the pain of Blagojevich’s absence and how he has missed the graduations and piano recitals of the couple’s two children.

“Please let Rod come home. … Please give Annie the chance for a normal happy childhood, that has slipped away for Amy,” she wrote. “I am pleading with you, indeed begging you, to please be merciful.”

Through what she said were almost daily calls home, Patti Blagojevich wrote about how her husband has supported the family.

“Rod has been there with advice and a sympathetic ear for our daughters as they struggle through life with a very recognizable last name and the burden that comes with it,” she wrote.

The Chicago-based 7th U.S. Circuit Court of Appeals last year tossed convictions tying Blagojevich’s bid to win a White House appointment for appointing someone to Obama’s Senate seat. The three-judge panel upheld his convictions on allegations that he tried to swap the Senate appointment for campaign cash, finding that trading one job appointment for another does not break the law.

The judges didn’t say Blagojevich was necessarily entitled to a lower sentence than the one imposed on Dec. 7, 2011, given “overwhelming” evidence on the remaining felonies. They said some of Zagel’s sentencing calculations were in error, to Blagojevich’s advantage.

After the appellate court’s finding, Blagojevich appealed to the U.S. Supreme Court to toss his remaining convictions, including one for trying to extort a children’s hospital for a campaign contribution and lying to the FBI. But the high court refused to hear the long-shot appeal.

Prosecutors urged Zagel to impose the same 14-year prison term — one of the stiffest sentences for corruption in Illinois history. They argued that maintaining the sentence would send a message to would-be corrupt politicians in a state where four of the last 10 governors have ended up in prison.

The defense asked for a five-year term, citing the dropped counts and Blagojevich’s exemplary behavior in prison.

Lawyers also submitted more than 100 letters from prisoners, some of whom referred to Blagojevich as “The Gov.” Although Blagojevich was brash in his days as governor, prisoners portrayed him far differently. They said he was humble and self-effacing, a voracious reader, an insightful life coach and popular lecturer on everything from the Civil War to Richard Nixon.

Calls for leniency have been tough sells to Zagel, a no-nonsense judge who berated Blagojevich at the 2011 sentencing. Zagel told him “the fabric of Illinois is torn and disfigured” by his corruption and handed down a far stiffer sentence than many expected.

A lawyer for former Illinois Gov. Rod Blagojevich says now that a judge has declined to lighten Blagojevich’s 14-year prison sentence, he may again appeal to the U.S. Supreme Court.

After Zagel’s ruling Tuesday,  Goodman said that the decision of whether to appeal it up to the Supreme Court will be up to Blagojevich, but added, “I don’t see why he wouldn’t.”

When the high court refused to consider Blagojevich’s corruption conviction earlier this year, one argument prosecutors made against the appeal being heard was that resentencing and other legal steps needed to play out.