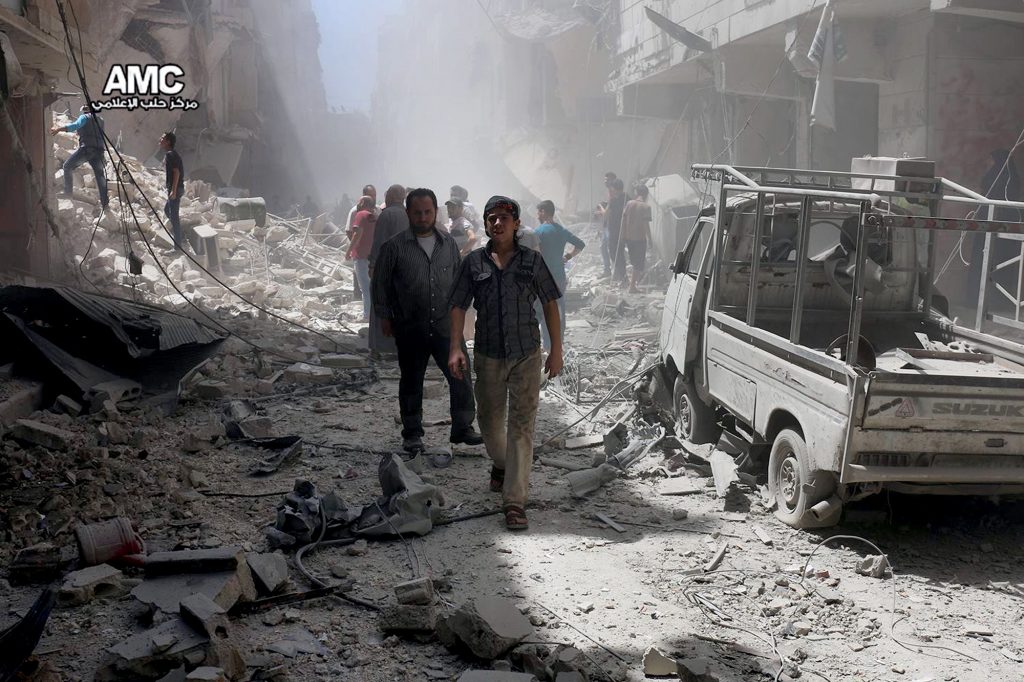 Experts painted a graphic portrait of barrel bombings, attacks on medical facilities, chemical weapons use and the ongoing suffering inside the besieged Syrian city of Aleppo, shaming the international community for its inaction at an informal Security Council meeting Monday organized by the United States.

Dr. Zaher Shaloul, a Syrian-American doctor from Chicago, said medical facilities in eastern Aleppo are routinely targeted, creating a situation where people are dying from treatable conditions for lack of medical care and basic supplies.

Shaloul, who last visited Aleppo in July, said he asked a nurse there what she wanted most from the United Nations and she replied that she wanted help evacuating a 10-year-old girl named Shahd who was wounded by a barrel bomb and is now dying due to a shortage of medicine.

“We don’t need condemnations, prayers or pointing fingers; we had enough of that. I ask you to meet the people of Aleppo and see them as humans. I have one request, besides saving Shahd: Visit Aleppo yourself and meet with its doctors, nurses and patients. If three doctors from Chicago were able to do that, you can do it,” Shaloul told diplomats.

Shahloul then showed slides showing women and child victims, one of them a child he said was injured in a chlorine gas attack.

He said only 35 physicians remain in Aleppo, where 15 health care facilities were attacked in July alone.

Currently, more than 250,000 people are besieged by government forces in the eastern part of Aleppo, a city that has been divided into rebel and government-controlled parts since 2012. The government completely closed the main road into the rebel-held areas of Aleppo on July 17, effectively cutting off all supplies and exit routes.

Rebels breached the Syrian government siege on opposition neighborhoods in Aleppo on Saturday, opening a corridor in the south and marking a major military breakthrough, but observers said civilians still don’t have a safe route out because of intense airstrikes and shelling in the area.

Also Monday, U.N. officials in Syria urgently called for a humanitarian pause to repair Aleppo’s damaged water and electricity infrastructure and provide aid to those trapped in the eastern part of the city.

“Water available through wells and tanks in Aleppo is not nearly enough to sustain the needs of the population. The U.N. is extremely concerned that the consequences will be dire for millions of civilians if the electricity and water networks are not immediately repaired,” said the statement signed by Yacoub El Hillo, U.N. resident coordinator for Syria, and Kevin Kennedy, regional humanitarian coordinator for the Syria crisis.

“At a minimum, the U.N. requires a full-fledged ceasefire or weekly 48-hour humanitarian pauses to reach the millions of people in need throughout Aleppo and replenish the food and medicine stocks, which are running dangerously low,” the statement continued.

Abdullah Nawhlu, a member of Syrian Civil Defense, a neutral and impartial humanitarian group, speaking by video from Aleppo, described a dire situation with rapidly dwindling stocks of food and fuel, not to mention medical supplies.

“If the siege of Aleppo continues … greater humanitarian disasters will happen, as there will be no medicine for the injured and no flour for people to bake with,” Nawhlu said as a constant barrage of gunfire could be heard in the background. “We are speaking about a siege of 350,000 people, not 10 or 50 or 100 people. We’re talking about 350,000 humans, a huge humanitarian disaster that will shame humanitarian organizations forever.”

U.S. Ambassador Samantha Power called on the Security Council to “send a clear, unified message that these sieges must end, and that there’s no justification for cutting innocent people off from basic aid.”

“To this end, we once again urge Russia to stop facilitating these sieges, and to use its influence to press the regime to end its sieges across Syria once and for all,” Power said.

Russia responded by accusing the U.S. of playing politics with a humanitarian issue.

“We urge our colleagues to refrain from their usual deceit and admit that the main cause of all the humanitarian problems in Syria is not the counter-terrorist actions by the legitimate government in Syria to bring order against the external interference in intra-Syria affairs in 2011, which sought to topple legitimate authorities and provide weapons to the opposition,” Russia’s deputy ambassador Vladimir Safrankov said. “Because before then the humanitarian situation in Syria was not a cause of concern to anyone.”