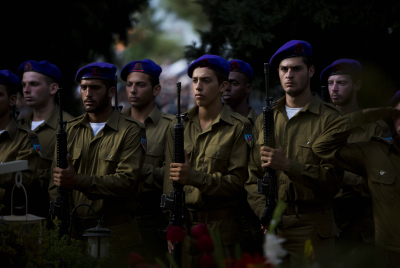 Tuesday marks two years since IDF officer Hadar Goldin went missing in Gaza – and family members called on the Israeli public to attend a memorial service in his memory. “We call on the public to gather and show that Hadar, Hy”d, was not forgotten in Gaza,” the family said in a statement. “Unfortunately, it is disappointing that no ministers in the government of Israel was able to find time to come and honor Hadar at the anniversary of the second year of his death.”

Goldin was last seen being dragged into a Hamas terror tunnel, after he was shot in a battle with terrorists during Operation Protective Edge. He is presumed to be dead, but Hamas is believed to still have his body. The Goldin family, along with the family of IDF officer Oron Shaul, who also went missing in that same battle, demanded that Israel refuse to close its reconciliation deal with Turkey unless Ankara would pressure Hamas to release the bodies, but the government did not do so. The two were declared last year as killed in battle. Also missing in Gaza and presumed alive is IDF soldier Avraham Mengistu, who was captured by Hamas in September 2014, at the end of Operation Protective Edge.

The families of the three soldiers slammed the reconciliation deal, demanding that the return of their sons be a condition for its approval – something Prime Minister Binyamin Netanyahu said was not possible. As part of the agreement, Israel is allowing Turkey to become more active in Gaza, taking on projects such as the construction of a power plant, while the families had hoped that Israel could press Turkey to force Hamas to release the soldiers.

The families sued the government, demanding that the deal be suspended until the three were returned. The case reached the High Court, which ruled against the petitions, saying that “there are matters that are strictly for the state to deal with. There is no doubt that the claims in these petitions are worthy and interesting, but the court will pursue them. That is the job of the government.”

In its statement Monday, the Goldin family slammed Netanyahu, saying that his declarations of support for the family and its suffering  are “empty of meaning. His actions regarding Hadar were the opposite of what he promised us, until the very last moments” before the Turkey deal was finalized. “He brought us and the Israeli nation a bad and problematic deal, which ignores the suffering of the families and fate of Israeli heroes.”