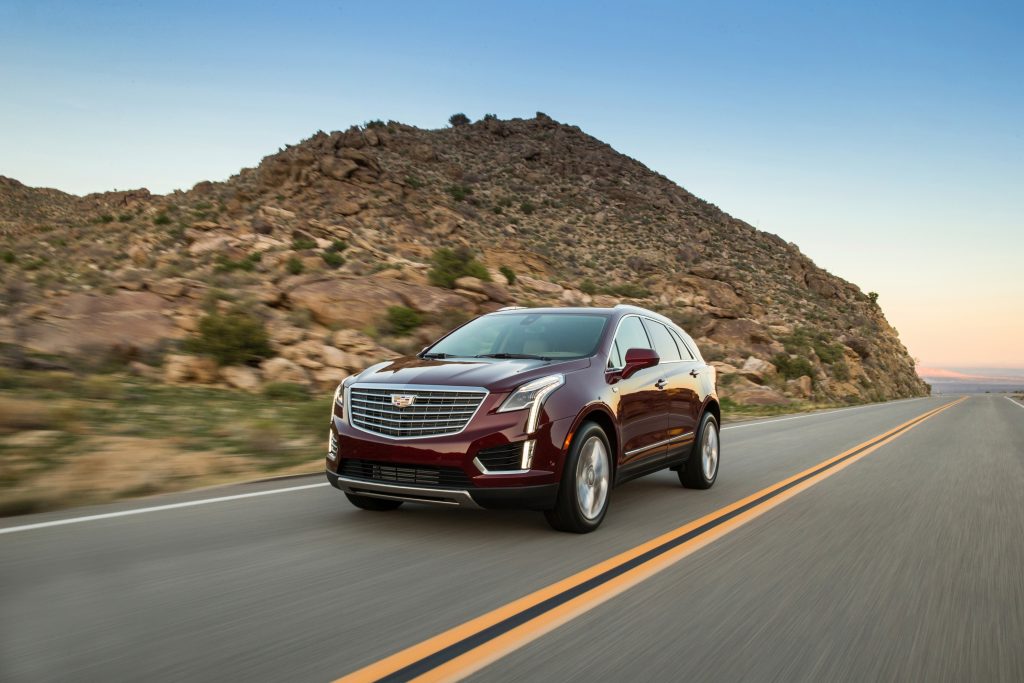 Some things bear repeating. In Cadillac’s case, it is the shield shape of its crest tattooed all over the new XT5 crossover.

There’s a lot more than branding riding on this successor to the outgoing SRX crossover, including a new trim level hierarchy, and a new alphanumeric naming system similar to the luxury German brands it is targeting.

As luxury makers introduce more entry-level products to court young buyers, and buyers turn to more and more crossovers, Cadillac needs the XT5 to not just turn heads but serve as the only crossover in the lineup beside the full-size Escalade. For now.

Maybe that is why there is a $24,000 spread between the four trim levels.

At the risk of losing you, where Cadillac nearly lost me, is $63,000 for the top-of-the-line Platinum trim. That’s steep, even for a luxury compact crossover. Performance-tuned crossovers such as the new Jaguar F-Pace or Porsche Macan can cost more, as will the largest engines in the BMW X5 or Mercedes-Benz GLE.

From a performance standpoint, the naturally aspirated V-6 engine can’t compare with the German turbos. It takes too long to get the torque you need to feel it rip away from its civilized bearings, even in sport mode. Discrete paddle shifters give drivers more input should they choose to redline it.

If you’re a performance junkie, hold off until a V-series comes out or until they figure out how to get the two-liter turbo 4 sold in China over here. If, on the sensible hand, you like crossovers for versatility and ride height, then the V-6 and amenable eight-speed is better than offerings from Acura and Lexus.

This is the strange place the XT5 finds itself, between premium and luxury, and also between classes. It’s larger than a compact crossover but smaller than a midsize. Presumably Cadillac wants it to stand out without compare.

All models come with V-6 engine paired to eight-speed transmission in front-wheel drive. Automatic start/stop comes standard, though it does not come with a shut off button, which may bother drivers in stop-and-go traffic on the daily commute. Otherwise, it’s not disruptive.

Not bad on paper.

Once we make our $24,000 leap over other trims, which include “luxury” and “premium luxury” (c’mon, Caddy, even McDonald’s has more creative naming upgrades), Cadillac offers a pop of panache with the Platinum trim.

While the 20-inch wheels are an athletic improvement on the outside, the 12-spoke rims blend in more than stand out. The grille has more and thinner slats, as well as front and rear aluminum skid plates that give the AWD Platinum a bit of off-road legitimacy.

The interior, tricked out with all the style, convenience and safety features you’d expect at that price point, is where the Platinum trim and XT5 stand out.

The inside is crowned with a gorgeous microsuede interior that, to one 10-year-old passenger, showed my age. “It makes me feel old.” When pressed for details, he said it was the brown.

I liked how the beige contrasted the chrome trim band making the shieldlike dip in the dash to the real wood extending from the door panels to the flat planes of leather on the seats.

Indeed. The only criticism inside was the odd electronic gear stick. It was as annoying at the end of the week as at the beginning. One reason for it is to open up space for cup holders in the console and to create a storage area under the console that conceals phones and other items from passersby.

Platinum comes with everything: a panoramic sunroof, rearview mirror that turns into a supplemental backup camera that can stay on even when driving forward, tri-zone climate control for driver, passenger and rear seat, leather seats, all kinds of nifty ambient lighting, and the best head-up display on the market.

At the other end of the spectrum, Cadillac made minor but significant tweaks to its CUE interface. There is a climate panel with firm toggles, and there is even a touch-sensor volume bar separate from the 8-inch color screen. It retains the sleek spartan design of the dash and like the dash itself the climate and volume bars are in the shape of the Cadillac crest.

That thoughtfulness to every detail is the defining trait of luxury. The XT5 is there in design, and if you’re not looking for more boost under the hood, that should be enough to announce Cadillac’s place in the crossover space.

2017 Cadillac XT5 Platinum at a glance