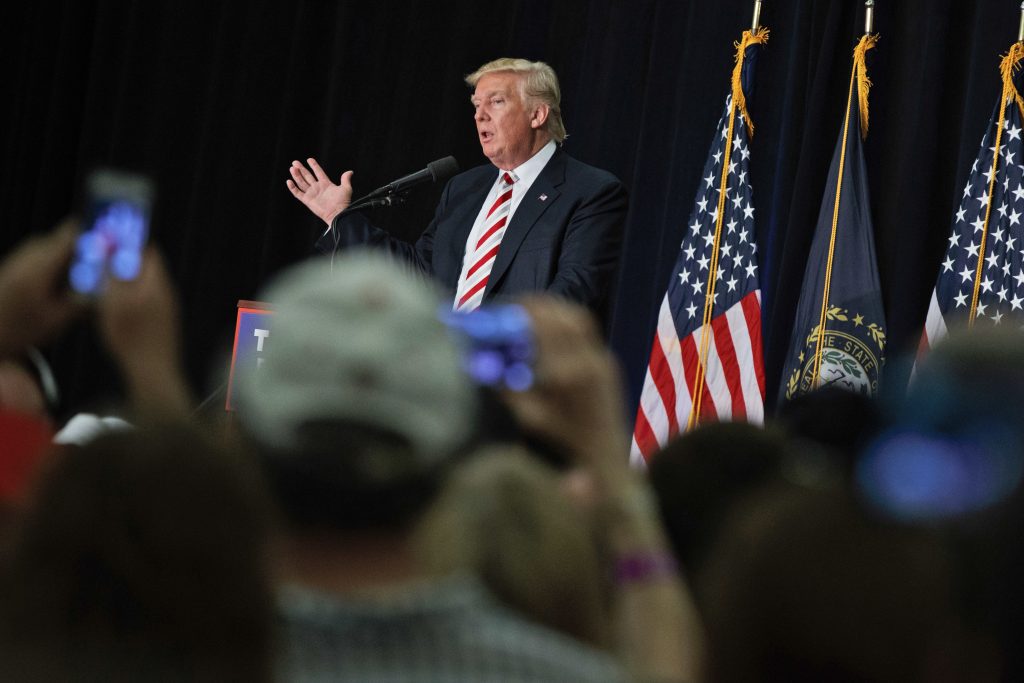 Donald Trump is trying to shift from a disastrous stretch of his presidential campaign to one focused on policy and party unity. But even as his allies speak of lessons the political newcomer has learned, two of his staunchest Republican critics predict he’s heading for losses in a pair of battleground states.

Trump is set to deliver an economics speech on Monday to the prestigious Detroit Economic Club in his effort to step past his spats over the past 10 days with the Muslim-American parents of a slain Army captain and the leaders of a Republican Party he has promised to unite.

“Mr. Trump on Monday will lay out a vision that’s a growth economic plan” that will focus on cutting taxes, cutting regulation, energy development and boosting middle-class wages, campaign chairman Paul Manafort said in remarks broadcast Sunday on Fox Business. “When we do that, we’re comfortable that we can get the agenda and the narrative of the campaign back on where it belongs, which is comparing the tepid economy under Obama and Clinton, versus the kind of growth economy that Mr. Trump wants to build.”

What came before Monday’s speech, Manafort suggested, doesn’t count in the race to Election Day on Nov. 8. “It’s a three-month campaign,” he said.

Two of Trump’s staunchest Republican critics say Trump may have done irreversible damage in two critical states, Arizona and Ohio, with an approach to immigration reform that some say is divisive. Trump wants to build a wall between the United States and Mexico and now says he wants to suspend immigration from “terror countries” — though he has yet to say what those are.

Ohio Gov. John Kasich, who lost the Republican nomination to Trump, has not endorsed the billionaire and skipped the party’s convention in Cleveland, said Trump faces a difficult climb in a state that’s a must-win for Republican presidential candidates.

“He’s going to win parts of Ohio, where people are really hurting. There will be sections he will win because people are angry, frustrated and haven’t heard any answers,” Kasich said on CNN ”But I still think it’s difficult if you are dividing, to be able to win in Ohio. I think it’s really, really difficult.”

In an interview on CBS’s “Face the Nation,” Sen. Jeff Flake (R-Ariz.) said, “Yes, it is possible” that Democrat Hillary Clinton could beat Trump in his state, noting that Bill Clinton won Arizona in 1996 and that Hispanics represent about a third of the Arizona population.

“You can’t just throw platitudes out there about a wall or about Mexico paying for it and then be taken seriously here,” Flake said.

Clinton is expected to deliver her own economic plan to the Detroit Economic Club on Thursday.

That’s who Republicans want to see Trump fighting — the former senator and secretary of state, not Republicans and others. It’s a message furious senior members of the party carried to Trump privately and publicly in the days after Trump last week refused in a Washington Post interview to endorse the re-election bids of House Speaker Paul Ryan, Sen. John McCain of Arizona and Sen. Kelly Ayotte of New Hampshire. The trio had strongly disapproved of Trump’s fight with Khizr and Ghazala Khan, Muslim-Americans whose son, Capt. Humayun Khan, was killed in Iraq in 2004.

On Friday at a Wisconsin rally not attended by Ryan or Gov. Scott Walker, Trump reversed course and endorsed all three lawmakers, saying, “We have to unite.”

“If you look at the last few days, I think he’s gotten the messages,” former House Speaker Newt Gingrich said on “Fox News Sunday.” ”It’s very tricky if you’ve never run for public office, to jump from being a businessman to being one of the two leaders fighting for the presidency, and he’s made some mistakes.”

Former New York City Mayor Rudy Giuliani said on ABC that Trump’s endorsements show he “has the ability and the understanding to realize that there are going to be disagreements and you’ve got to be able to reach out to the entire party.”