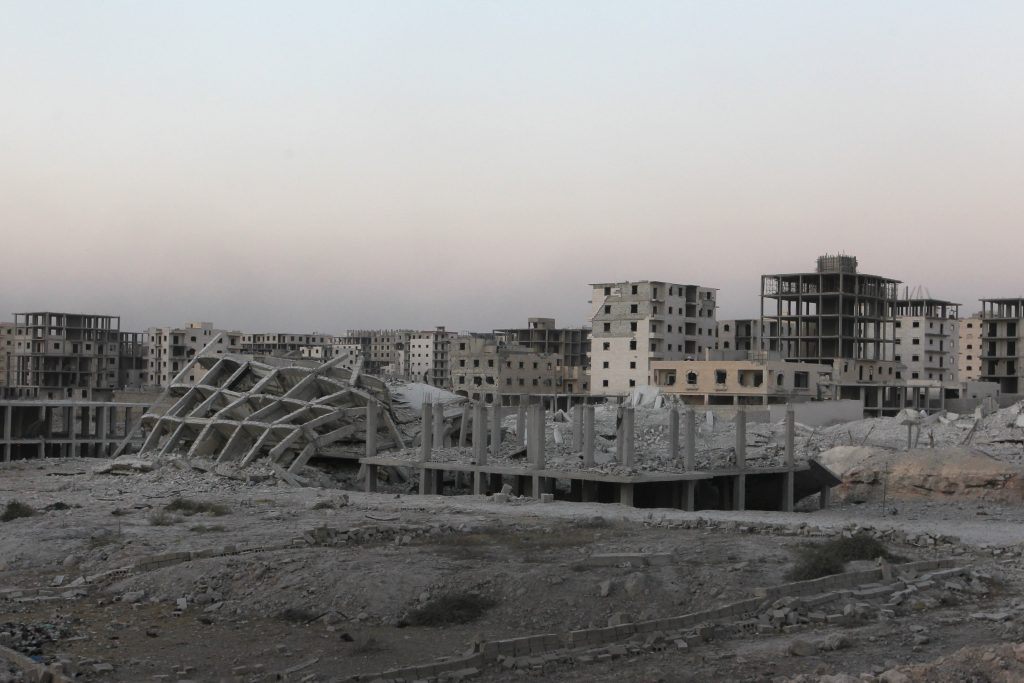 Syrian rebels broke through to besieged opposition-held areas in eastern Aleppo on Saturday in an assault on a major government military complex meant to end a month-long siege, terrorists and a monitoring group said.

Pro-government media outlets denied the siege had been broken and a U.S. State Department official said the situation was “too fluid” to comment. The heavy fighting and air strikes reported from the area seemed to indicate any passage that may have been opened would be far from secure enough for civilians to travel through.

Rebels have been trying to break through a thin strip of government-controlled territory to reconnect insurgent areas in western Syria with their encircled sector of eastern Aleppo, in effect breaking a government siege begun last month.

The offensive against the government’s Ramousah military complex, which contains a number of military colleges, began on Friday. Taking control of Ramousah and linking up with eastern Aleppo would isolate government-held western Aleppo by cutting the southern route out toward the capital Damascus.

It would also give rebels access to armaments stored in the base the Syrian army has used in the five-year conflict as a strategic platform from which to shell opposition targets.

Two rebel groups and a monitor said on Saturday they had broken the siege, but pro-government media outlets denied the claim and said the Syrian army was in fact regaining recently taken territory from rebels.

“We’ve seen reports but the situation is fluid and we aren’t going to provide battlefield updates,” the State Department official told Reuters.

Jabhat Fatah al-Sham, formerly the al-Qaida-affiliated Nusra Front, said in an online statement, “Fighters from outside the city met their brother fighters from inside the city, and work is under way to establish control over remaining positions to break the siege.”

A commander from more a moderate rebel group also told Reuters the siege had been broken but said it was early days and matters were “not easy.”

The United Kingdom-based Syrian Observatory for Human Rights, which monitors the war, said intense fighting and heavy air strikes meant no secure corridor had yet been established between the two rebel-held territories.

In another report, the Observatory said an air strike on a hospital in northwestern Syria killed 10 people, including children, on Saturday. July was the worst month yet for attacks on medical facilities in the war-torn country, a medical charity said, with 43 recorded attacks on healthcare facilities in Syria.

The hospital is in Meles, about nine miles from Idlib city in rebel-held Idlib province. Syrian government and allied Russian warplanes operate in Syria but it was not known which aircraft carried out the strike.

The Observatory, in its report on the Aleppo fighting, said rebels took control on Friday of the Weaponry College and part of the Artillery College, but the Syrian army said it had repelled the attack.

Rebels are now fighting to establish full control of the Artillery College and the Air Force Technical College, and to make a firm link-up with rebel-held eastern Aleppo.

The Syrian military news agency said later on Saturday the Syrian army had restored control over the Artillery College and had made the rebels withdraw from the Weaponry College.

A witness said people in the streets of a part of eastern Aleppo briefly celebrated reports of the siege being broken before the sight of warplanes in the sky scattered them.

A live Syrian state media report from the outskirts of the artillery base in Ramousah, in southwest Aleppo, broadcast the sound of gunfire, explosions and warplanes flying overhead.

Videos released by rebel groups claim to show gun battles as insurgents moved into buildings in the complex.

Syrian President Bashar al-Assad wants to take full control of Aleppo, pre-war Syria’s most populous city, which has been divided between rebel and government-held areas. Such a victory would be a crushing blow to the insurgents.

A quarter of a million civilians are thought to still live in Aleppo’s opposition-controlled eastern neighborhoods, effectively under siege since the army and allied militia cut off the last road into rebel districts in early July.

Residents on both sides of the city are suffering greatly. Government areas regularly come under attack from rebel shelling, and rebel-held areas are routinely shelled and come under air attack from Syrian and allied Russian forces.

Only 35 doctors remain in the city and over 100 people are in need of medical evacuation, SAMS Aleppo Coordinator Dr. Abo El-Ezz said in a statement.

The multi-sided civil war in Syria, which has been raging since 2011, has drawn in regional and global powers, caused the world’s worst humanitarian emergency and attracted recruits to Islamist militancy from around the world.

Some rebel groups refer to the Aleppo battle as the “Ibrahim al-Youssef Offensive,” a reference to a Sunni army officer said to have led a massacre of cadets at the Artillery College in the late 1970s. The cadets were predominantly from the Alawite sect of Bashar al-Assad and his late father and predecessor as president, Hafez al-Assad.