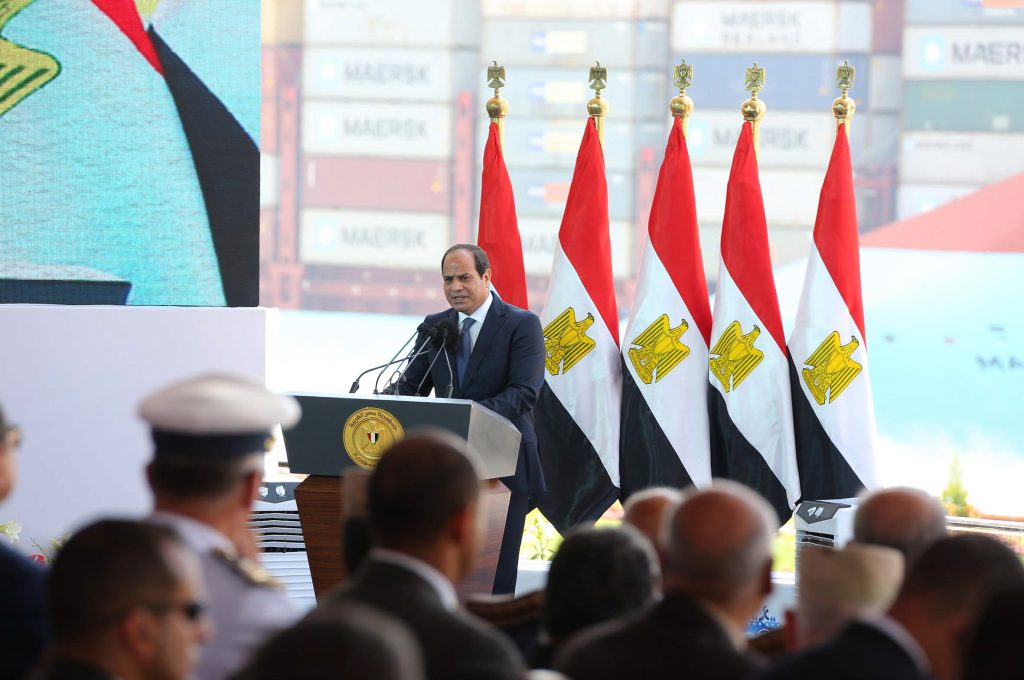 Egypt’s president on Saturday defiantly dismissed criticism of his handling of the country’s ailing economy, arguing that the skeptics were seeking to undermine the will of Egyptians.

In comments marking the first anniversary of the inauguration of an expansion of the Suez Canal, President Abdel-Fattah el-Sissi strongly hinted that the now-banned Muslim Brotherhood was behind a persistent campaign to cast doubt on the economic worthiness of several mega projects his government has undertaken.

El-Sissi, a general-turned-politician, said a foiled assassination attempt on Egypt’s former mufti in Cairo on Friday was designed to “spoil” the joy of Egyptians over the waterway’s anniversary.

“It is the implementation of the rule of either we rule or kill you,” said el-Sissi, who led the military’s 2013 ouster of the Brotherhood’s Mohammed Morsi, whose one year in office proved divisive and prompted mass street protests. Sheikh Ali Gomaa, the former mufti and a zealous supporter of Morsi’s ouster, was unharmed in the attack, for which a little-known group claimed responsibility.

El-Sissi’s latest comments were his most detailed on the growing criticism of his economic policies, particularly the feasibility of the massive and costly projects he has opted to launch since his June 2014 election. These include the Suez Canal expansion, reclaiming 1.5 million acres in the desert, a nationwide network of roads, a new capital and the construction of cheap housing.

Critics contend the projects have not been sufficiently studied, stretched the country’s already shaky finances and drained resources from more pressing areas. Egypt’s economic woes, meanwhile, have been worsening despite billions of dollars in grants and loans from oil-rich Gulf nations since 2013, with the vital tourism industry still rooted in a slump, foreign currency in short supply, unemployment and inflation rates in double digits and the local currency’s value falling.

“What is being done to you, Egyptians, is an attempt to defeat your will,” el-Sissi said in an address from the Suez Canal city of Ismailia. “The objective of all the doubting is to undermine every achievement and strike at the will of the people. But it is an impossible task.”

El-Sissi said he was vexed by the criticism, which he said also touched on the multi-billion dollar foreign arms purchases made in the last two years. “What is the deal? This is very strange, seriously,” a visibly frustrated el-Sissi said. “We have said before that the army must be strong because the region is going through a difficult phase.”

He acknowledged, however, that the Egyptian pound’s value was falling against the U.S. dollar and that prices were soaring, but returned to his oft-repeated assertion that what has been achieved under his stewardship would normally have taken 10-15 years to accomplish.

“There will be skepticism with every achievement,” he said, repeating another frequently stated theme by cautioning Egyptians against plots to divide them.

International Monetary Fund delegates are in Cairo negotiating with government officials over what Cairo says is a request for a $12 billion loan over three years to bail out the country’s flagging economy. An agreement would hinge on Egypt’s willingness to introduce far-reaching and politically sensitive reforms such as lifting or reducing state subsidies, better tax collection and devaluing the local currency.

El-Sissi has said that “difficult” decisions will have to be made to rectify the economy, but vowed that low-income Egyptians would be shielded from additional hardship.