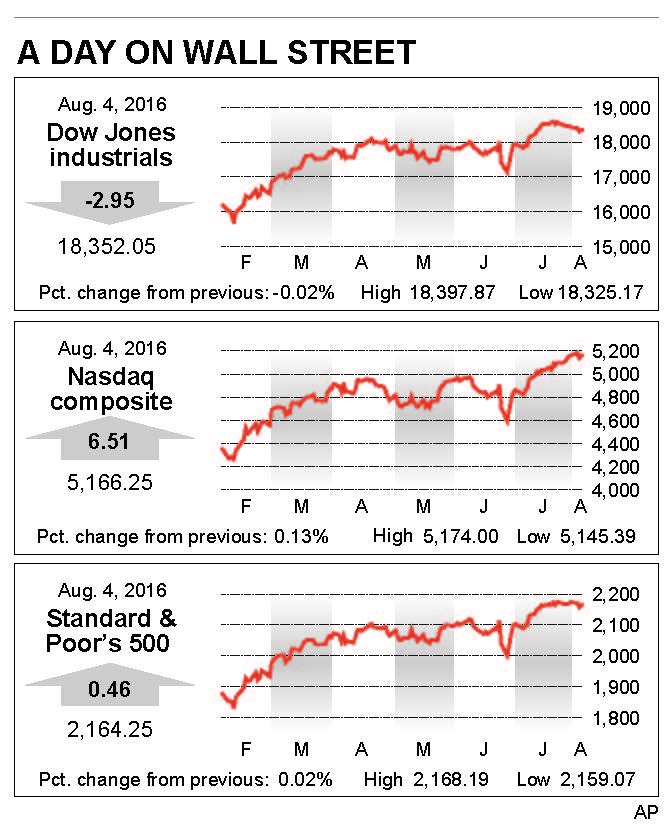 U.S. stocks wavered Thursday and finished barely higher as an interest rate cut by the Bank of England, a move intended to shore up the British economy, wasn’t enough to get investors out of their recent cautious mode.

Technology companies continued to make the biggest gains, as they’ve done over the last few months. Oil prices rose for the second day in a row, which hadn’t happened for almost three weeks. Bank stocks fell the most, as the interest rate cut suggests they won’t be able to make as much money on lending. While the Bank of England’s moves sent European stocks higher, investors in U.S. stocks moved carefully as they waited for Friday’s jobs report.

Technology stocks have done better than the broader market in the spring and summer, and on Thursday they were led higher by companies including Facebook and communications chipmaker Broadcom. Facebook rose $1.85, or 1.5 percent, to $124.36, and Broadcom gained $2.88, or 1.8 percent, to $166.99.

Materials companies made some of the biggest gains after strong earnings from Ball Corp. and Westrock. Ball, which makes metal and plastic packaging for food and drink companies, jumped $8.41, or 12 percent, to $78.51 and packaging company WestRock rose $1.77, or 4.2 percent, to $43.72.

The Labor Department said applications for unemployment aid rose to 269,000 last week, a level close to historical lows and a positive sign for the job market. The number of Americans collecting unemployment benefits has fallen more than 5 percent in last year, but the pace of hiring and economic growth slowed in the first half of 2016.

Mobile payments company Square climbed after it reported strong second-quarter results and raised its projections for the year. The stock rose 88 cents, or 8.4 percent, to $11.32.