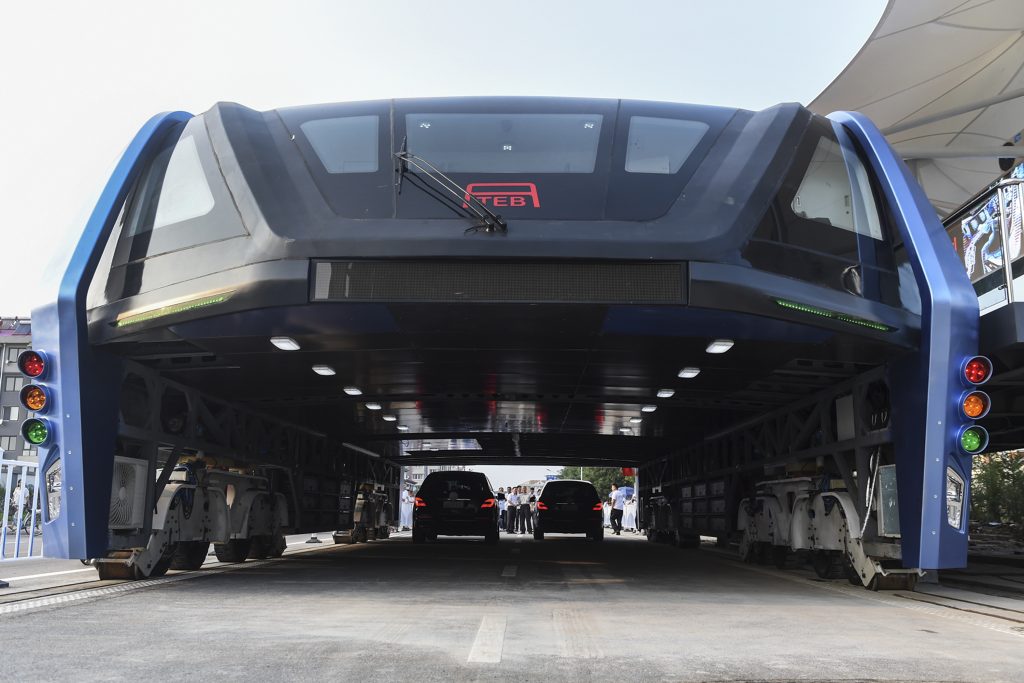 Every urban commuter laments the twice-a-day headache of traffic congestion and the often disappointing alternatives that mass transit offers.

A Chinese company has officially rolled out one potential solution: the TEB-1, or Transit Elevated Bus. The giant “flying” bus, as some have called it, straddles two lanes of traffic and stands nearly 16 feet tall so that it can pass over cars on the roadway below. While still a long way from mass production, the TEB-1 could one day alleviate major traffic woes in China and other countries with crowded metropolitan areas.

The concept of an elevated bus was first floated in 2010, and a model was debuted in May of this year, the New York Times reported. The company behind the project, TEB Technology, conducted a road test and opened its doors to prospective passengers in the Chinese city of Qinhuangdao on Tuesday, according to the Xinhua News Agency.

The Transit Elevated Bus piloted in China’s Hebei province rolls along a designated track, making it similar in some ways to a commuter train or tram — the key difference, of course, being that it runs on top of the existing roadway without the need to construct a separate overpass.

Images distributed by Chinese media show a spacious passenger compartment measuring 72 feet long by 26 feet wide, capable of holding up to 300 riders. Surprisingly, there are not very many seats. That would probably have to change should an American model ever come to fruition.

Indeed, it’s unclear whether the idea of an elevated bus could gain traction in the United States. The model piloted by TEB Technologies appears to clear midsize sedans with ease, but the large SUVs and trucks that clog U.S. roads may present a greater challenge.

What’s more, laying a track for the elevated bus on highways with few twists and turns is perhaps practical, but the crisscross pattern and narrow streets common in most cities may be more difficult. The hulking bus maneuvering its way around Washington’s infamous traffic circles, for example, seems problematic.

Adie Tomer, a fellow at the Brookings Institution, also sees roadblocks to bringing elevated buses to the United States. For one, they’re not particularly appealing visually, and Americans often aren’t keen on aesthetic changes. Also, laying miles of track and purchasing new buses means greater demand for infrastructure dollars that could be invested elsewhere.

“It’s a lot easier for [China] to strong-arm those kind of innovations through,” Tomer said. “We have a much more democratic process when it comes to infrastructure investment, and that will slow down how long it would take for this to take effect in the U.S.”

But don’t count the TEB-1 out just yet.

“The innovation itself certainly has potential,” Tomer added. “It’s naturally hard to get around the simple fact that it’s a physical piece of equipment that none of us have seen before, and I think that creates a natural reluctance to assume it can be viable.”