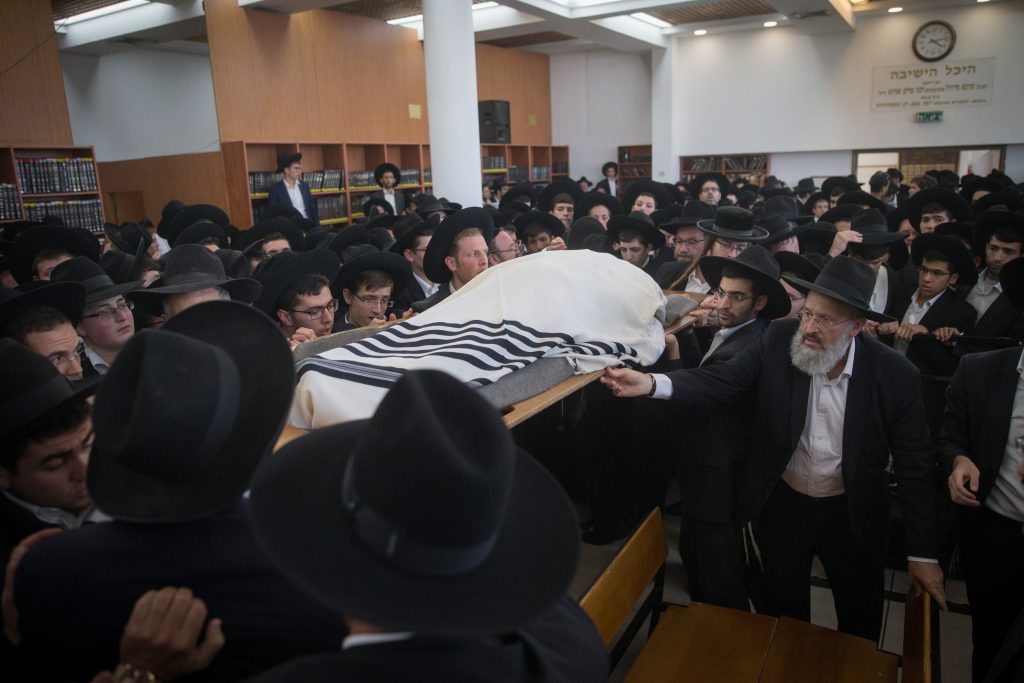 Harav Chadash, 75, was niftar after a several month illness. The Rosh Yeshivah was hospitalized over the last months.

The name of the Rosh Yeshivah, Harav Moshe Mordechai ben Tziviah Leah, was on the lips of his many talmidim ever since he was hospitalized, but, alas, the gezeirah was sealed.

When the news reached the yeshivah, the paroches was pulled aside, as a sign of mourning.

In his formative years, Reb Moshe Mordechai learned in Yeshivas Chevron, where he forged a close relationship with the Roshei Yeshivah.

When he came of age, Reb Moshe Mordechai married, tblch”t, Rebbetzin Sarah, the daughter of Harav Yehoshua Dov Lapin, zt”l, who was the son-in-law of Harav Chizkiyahu Yosef Mishkovsky, zt”l, a leading member of Vaad HaYeshivos.

In 5739/1979, Hagaon Harav Simcha Wasserman, zt”l, the son of Hagaon Harav Elchanan Wasserman, Hy”d, who founded Yeshivas Ohr Elchanan, named for his father, in Los Angeles, came to Eretz Yisrael, with the intent to establish a similar yeshivah. Harav Moshe Mordechai Chadash was entrusted with the position of Rosh Yeshivah.

From a small building in Ezras Torah, the yeshivah is housed today in an impressive building in Yerushalayim’s Romema neighborhood, and has, over the years, opened several yeshivos ketanos across Eretz Yisrael.

Harav Chadash, asides for tending to the network of yeshivos, held close contact with the bachurim of all yeshivos. He lived in the yeshivah building in Romema, to be near to the talmidim.

Aside for the yeshivos that he led, Reb Moshe Mordechai also opened an institute that reprinted and expounded on the works of Reb Elchanan Wasserman, Hy”d. They also published Marei Mekomos on numerous masechtos, which are used in many yeshivos.

He was noted for his shiurim, delivered in the Chevron derech halimmud, and not less for his deep sichos.

Reb Moshe Mordechai’s heartfelt tefillos were renowned, and many alumni would daven in the yeshivah on the Yamim Noraim, to be inspired by his tefillos.

In recent months, Reb Moshe Mordechai was hospitalized after being diagnosed with a serious illness.

Throughout the months, his talmidim held special learning sessions for his refuah as well as many atzaros tefillah.

One time, after being discharged from hospital, Reb Moshe Mordechai was able to deliver a shiur klali at the yeshivah, despite his weak state.

After that shiur, the Rosh Yeshivah thanked the talmidim for davening on his behalf and for the special learning sessions they undertook for his refuah.

Earlier this week, his condition took a turn for the worse and he was rushed back to the Hadasah Ein Karem hospital in Yerushalayim, where he was niftar Wednesday in the presence of family members and talmidim.

Rav Avraham Kreuzer, a talmid of the Rav, who had torn kriah in aveilus, spoke with great emotion about the rebbe he had just lost:

“Rav Chadash, zt”l, was a special manhig. He was all fatherliness, concern, and his talmidim kept up the kesher with him over many years. He was a rebbe both for the previous generation and the younger generation.

“All the different groups, from different eidot of Klal Yisrael, learned with him in the yeshivah. He was revered by the Sephardim, established a Sephardi yeshivah.

Rabbi Eli Yishai, described him tearfully as a “noble personality…incredible tznius.” “He had tremendous love for his talmidim, invested everything in them, gave them everything, in ruchniyus and in gashmiyus. One of the tzaddikim of the generation.

“Personally, I knew him since I was 10 years old. I knew the family, and we have a close connection to this day. It was very hard, the news of his petirah was so sudden. Only the day before I saw him in the hospital. It’s very hard. Very painful.”

Another talmid described him as “an ohev shalom, rodef shalom, a great talmid chacham. He was devoted to the yeshivah and the talmidim in the most extraordinary way.

“Everything he did was with shleimus gedolah, great perfection. There aren’t many left like him in Eretz Yisrael.”