U.S. stocks took their biggest loss in almost a month on Tuesday as investors worried about the health of the U.S. economy and sold shares in retailers and car companies. Machinery companies also fell and the price of oil continued to decline.

Travel companies fell after cruise line operator Royal Caribbean cut its projections for the year, and automakers and suppliers fell after car companies reported lower U.S. sales for the month of July. Banks finished lower as investors worried about the health of banks in Europe. While stocks set all-time records as recently as July 22, they’ve been trading in a very narrow range for the last few weeks. Since stocks aren’t making big gains, investors are sensitive to signs of trouble for the U.S. economy, like weaker sales of autos or last week’s disappointing GDP report. 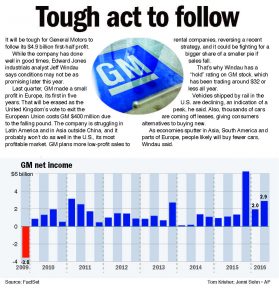 Cruise line operator Royal Caribbean cut its forecasts for the year as the strong dollar continues to hurt its results. That left Royal Caribbean’s stock down $4.51, or 6.3 percent, to $67.35. Other consumer companies like retailers Nordstrom and Kohl’s and office supply chain Staples all stumbled.

Citigroup retreated 43 cents, or 1 percent, to $42.99 and Morgan Stanley fell 50 cents, or 1.8 percent, to $28. Bank stocks in Europe tumbled for the second day in a row. The losses extended to banks that were effectively given a clean bill of health by the European Banking Authority in last Friday’s stress tests. 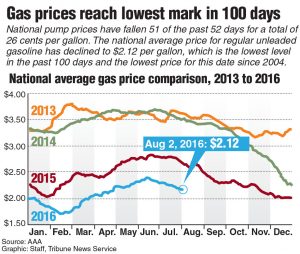 Oil prices continued to drop, extending a slide that has lasted more than two weeks. Benchmark U.S. crude fell 55 cents, or 1.4 percent, to $39.51 in New York. U.S. crude hadn’t closed under $40 a barrel since April 8. Brent crude, which is used to price international oils, sank 34 cents to $41.80 a barrel London.

Drugstore chain and pharmacy benefits manager CVS Health raised its 2016 forecasts as specialty drug prices kept rising and deals for Omnicare and Target’s pharmacy and clinic unit boosted its results. Its stock rose $4.57, or 4.9 percent, to $98.06.