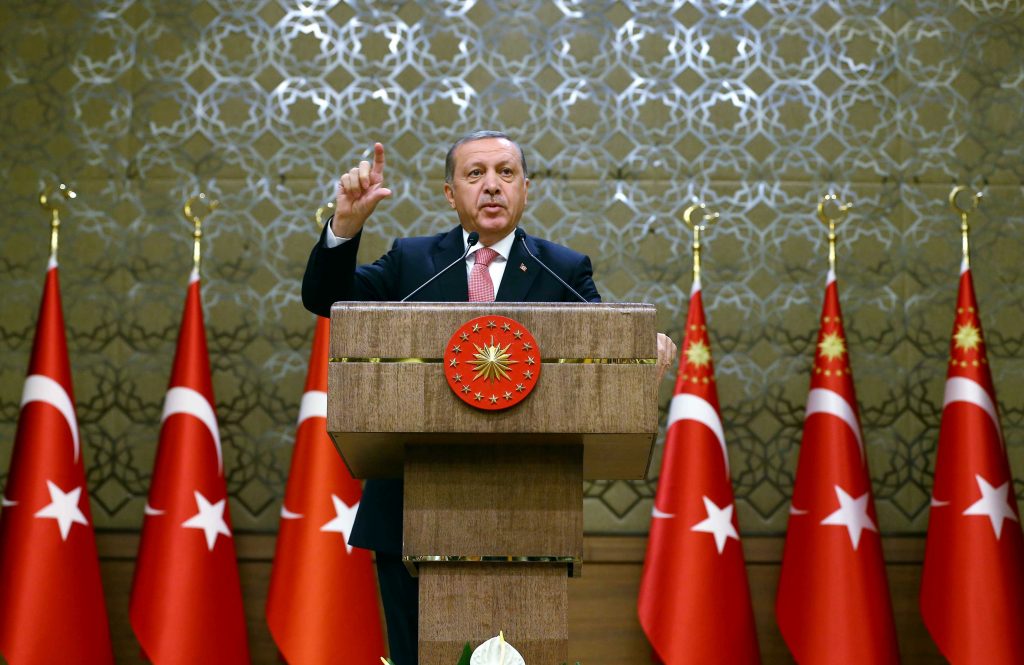 Turkey’s President Recep Tayyip Erdogan on Tuesday once again blasted unnamed Western countries for what he called support for the attempted coup on July 15, which left more than 270 people dead.

“The West is supporting terrorism and taking sides with coups,” Erdogan said.

Speaking at an event for foreign investors in the capital, Erdogan singled out Germany for criticism, after a German court ruled against allowing him to appear on a video link to address a crowd of about 30,000 supporters and anti-coup demonstrators in Cologne over the weekend.

Erdogan said that Turkey sent Germany over 4,000 files on wanted terrorists, but Germany did nothing. Nevertheless, he noted that the German courts did manage to quickly decide against him speaking at the rally.

Erdogan repeated a complaint that no foreign leader had visited Turkey after the failed coup, while France and Belgium received solidarity visits after terror attacks there.”Those we considered friends are siding with coup-plotters and terrorists,” the president said.

The government says the coup was instigated by U.S.-based Muslim cleric Fethullah Gulen, a former Erdogan ally who has been living in self-imposed exile in Pennsylvania. Turkey has demanded his extradition, but Washington has asked for evidence of the cleric’s involvement, saying the extradition process must take its course.

Erdogan complained about the request for evidence, saying: “We did not request documents for terrorists that you wanted returned.”

The government has launched a sweeping crackdown on Gulen’s movement, which it characterizes as a terrorist organization and which runs schools, charities and businesses internationally. In Turkey, nearly 70,000 people have been suspended from their jobs on suspicion of being involved in the movement.

“They requested certain information following our first letter; we provided answers to the question ‘why is it urgent?'” Anadolu quoted Bozdag as telling reporters in parliament, adding that Turkey had intelligence indicating Gulen might leave for a third country.

“I hope that the United States decides in Turkey’s favor, in line with democracy and the rule of law, and returns this leader of a terror organization to Turkey,” he said.

The minister said that if Gulen leaves the U.S., it would be with the full knowledge of U.S. authorities.

Part of the crackdown against Gulen’s network has focused on reforming the military, bringing it increasingly under civilian command. About 18,000 people have been detained or arrested, most of them from the military, and authorities have said the purge of those in the military who are suspected of having links to Gulen will continue.

Prime Minister Binali Yildirim announced plans to shut down two military high courts — the administrative and appeals courts — and said military courts, which deal with disciplinary issues, would be placed under the Defense Ministry’s supervision.

The government has already issued a decree introducing sweeping changes to the military, including giving the president and prime minister the power to issue direct orders to the force commanders.

“These arrangements won’t weaken the Turkish Armed Forces, on the contrary they will strengthen them and prepare them to face all kinds of threats,” Yildirim said in an address to his ruling party legislators. “The armed forces will focus their energies on their fundamental duty.”

Separately, authorities issued 98 new detention warrants, including for military doctors, a senior government official said, on condition of anonymity in line with regulations.

“Our state and people came back from the brink and it was our commander-in-chief Recep Tayyip Erdogan’s unyielding stance that ensured it,” Yildirim said.