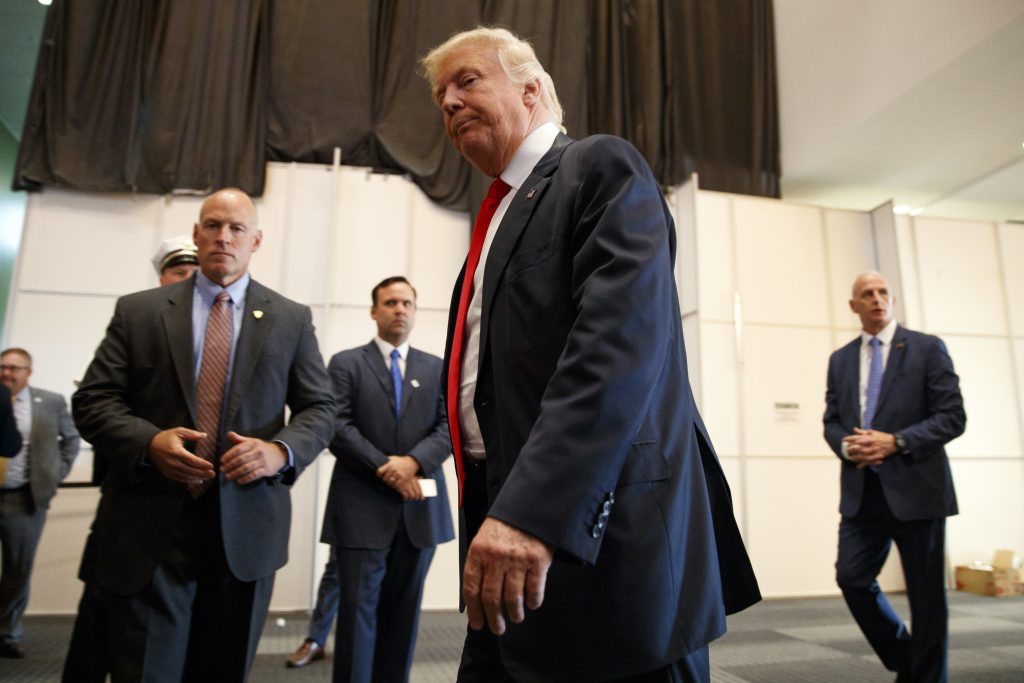 Republican presidential nominee Donald Trump suggested Monday that he fears the general election “is going to be rigged” — an unprecedented assertion by a modern presidential candidate.

Trump’s extraordinary claim — one he did not back up with any immediate evidence — would, if it became more than just an offhand comment, seem to threaten the tradition of peacefully contested elections and challenge the very essence of a fair democratic process.

“I’m afraid the election is going to be rigged, I have to be honest,” the Republican nominee told a town hall crowd in Columbus, Ohio. He added that he has been hearing “more and more” that the election may not be contested fairly, though he did not elaborate further.

Trump made the claim after first suggesting that the Democrats had fixed their primary system so Hillary Clinton could defeat Bernie Sanders. Trump has previously backed up that thought by pointing to hacked e-mails from the national party that appeared to indicate a preference for Clinton. Still, the former secretary of state received 3.7 million more votes than Sanders nationwide and had established a clear lead in delegates by March 1.

The celebrity businessman — who has been known to dabble in conspiracy theories, including claims that President Barack Obama was not born in the United States and, more recently, that Sen. Ted Cruz’s father was an associate of President John F. Kennedy’s assassin — also claimed that the Republican nomination would have been stolen from him had he not won by significant margins. He then asserted that November’s general election may not be on the up-and-up.

He repeated the charge Monday night on Fox News, saying: “November 8th, we’d better be careful, because that election is going to be rigged. And I hope the Republicans are watching closely or it’s going to be taken away from us.”

Requests to Trump’s campaign for additional explanation were not returned.

The statement could be an effort by Trump to lay the groundwork of an excuse if he goes on to lose the general election. But if he were to be defeated in November and then publicly declare that the election results were bogus, his claim could yield unpredictable reactions from his supporters and fellow Republicans.

Trump has not been shy about asserting that the electoral process has been “rigged.”

It became a frequent catchphrase of his during a low-water mark of his primary campaign this spring, when forces allied with Republican rival Ted Cruz managed to pack state delegations with supporters of the Texas senator. Trump also asserted that the Republican Party had changed the delegate allocation in the Florida primary to favor a native candidate, like Jeb Bush or Marco Rubio, at Trump’s expense.

In recent weeks, in an effort to woo angry Sanders supporters to his campaign, Trump has made the claim that the Democrats’ process was also rigged. Monday night, Trump said Sanders “made a deal with the devil,” and said of Clinton, “She’s the devil.”

The Clinton campaign declined to comment about Trump’s remarks.

The event in Ohio was Trump’s first campaign appearance since the onset of his tussle with the parents of a slain Army veteran, but he did not address the flap. He spoke for nearly an hour Monday in Columbus, but did not mention his criticism of Khizr and Ghazala Khan, Muslims whose son was killed in Iraq in 2004.

The Khans spoke out against Trump and questioned his familiarity with the Constitution last week at the Democratic National Convention. Trump struck back by questioning whether Ghazala Khan had been allowed to speak. She said she is still too grief-stricken by her son’s death.

Trump criticized the family in an interview Sunday and again in a pair of online posts Monday morning. Asked on MSNBC Monday whether Trump should apologize, Ghazala Khan said, “I don’t want to hear anything from him and I don’t want to say anything to him.”

But his running mate, Mike Pence, quieted a campaign rally crowd Monday that booed a woman who said she had a son who serves in the U.S. Air Force and asked how he can tolerate what she called Trump’s disrespect of American servicemen. Pence asked the Nevada crowd to quiet down, then said about the questioner: “That’s what freedom looks like. That’s what freedom sounds like.”

He continued: “Capt. Kahn is an American hero. We honor him and his family … we cherish his family.” He added that Trump had great respect for veterans.