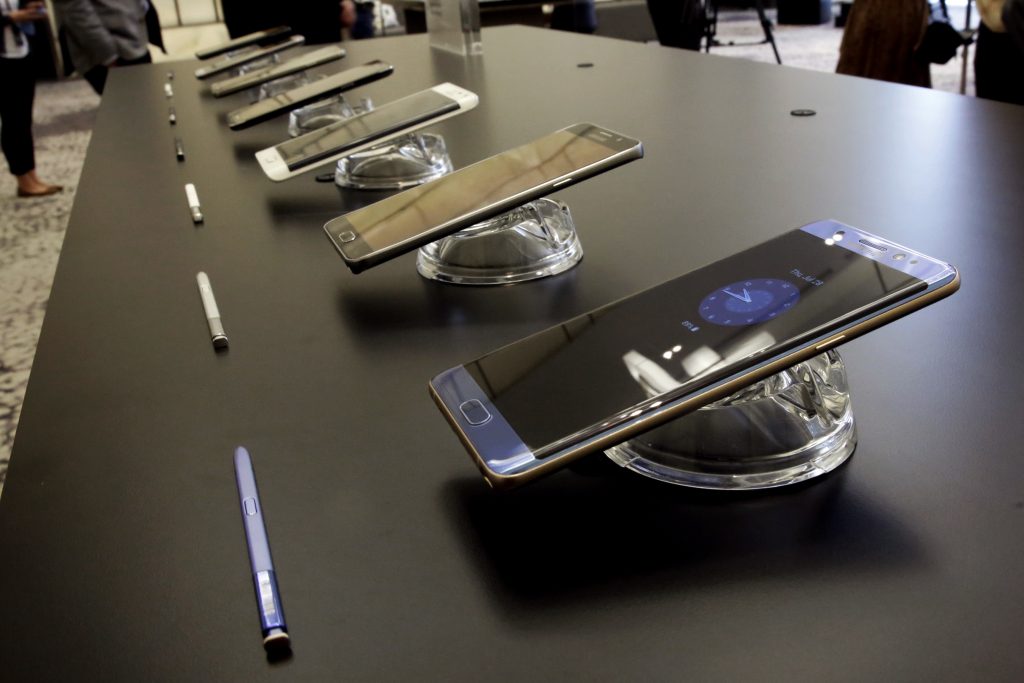 Samsung on Tuesday unveiled the Galaxy Note 7, the latest and greatest of its large-screened phones. This 5.7-inch, stylus-toting smartphone boasts a bevy of new features, including advanced security through iris scanning, a whole lot of storage, and an edge-to-edge display that Samsung promises will blow users away.

The Note 7, like its predecessors, has impressive specs and is aimed squarely at power users who want their smartphones to be the ultimate productivity machine. The most notable difference between the Note 7 and Samsung’s other premium phones is 64 GB of storage, which is double the standard on the Galaxy S7. With an SD card, the Note 7 has up to 256 GB of storage. With a 5.7-inch display, the Note 7 is also larger than Apple’s 5.5-inch iPhone 6s Plus. The Note 7 has the same processor and camera sensors as the S7 and S7 edge.

As for the battery, the Note 7’s will hold more of a charge than the Galaxy S7’s. It does, however, have the same quick-charging capabilities that have been so popular in the Galaxy line of phones. It also stands apart because it charges not with the standard micro-USB cable, but with a USB-C cable. The USB-C cable is reversible, meaning it doesn’t matter which side you plug it in.

Another feature that hasn’t been in the Note’s previous models is its waterproof design. Just like with the Galaxy S line, it will survive a short dip in liquid without completely frying the phone.

The Note 7 also stands out on the security front. Samsung boasts that the Note 7 has an iris scanner in addition to a fingerprint scanner, so that users have yet another option to secure their phones. (And, let’s be honest, an option to feel like an international man or woman of mystery.) The Note 7 is compatible with Samsung’s Knox security feature, and also gives users the option to secure files in a “Secure Folder” to which they can add another layer of authentication.

Samsung said that it will allow iris scans to be used to verify transactions through Samsung Pay in the future.

For those wondering why the Galaxy Note 7 is named that way, given that its direct predecessor is the Galaxy Note 5, Samsung explained that it’s actually to avoid confusion. Because its other premium phones, the Galaxy S7 and Galaxy S7 edge have the “seven” in their names, the firm decided to scoot the Note up a numeral.

The new devices come at a time when Samsung is riding high from the success of the Galaxy S7 and Galaxy S7 edge. The firm reported last week that its mobile unit accounted for half of its overall profit and revenue. Sales of the devices far exceeded expectations for Samsung, largely thanks to its ability to sell premium devices to a consumer market that’s lost some interest in buying high-end, flashy phones.

The phone goes on sale Aug. 19. Pre-orders will begin in the U.S. on Aug. 3. Samsung hasn’t released pricing information, other than to say it will be more expensive than the S7 and S7 edge.