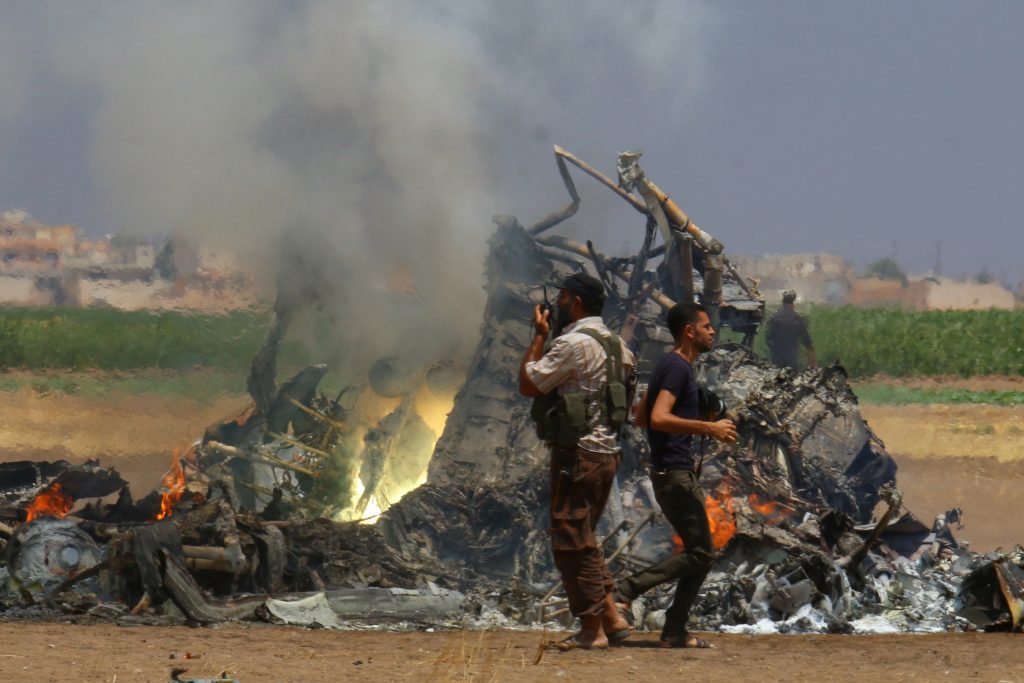 A Syrian rescue service operating in rebel-held territory said on Tuesday a helicopter dropped containers of toxic gas overnight on a town close to where a Russian military helicopter was shot down hours earlier.

A spokesman for Syria Civil Defence told Reuters that 33 people, mostly women and children, were affected by the gas in Saraqeb. The group, which describes itself as a neutral band of search and rescue volunteers, posted a video on YouTube purportedly showing a number of men struggling to breathe and being given oxygen masks by people in civil defence uniforms.

Syria Civil Defence workers, who went to the scene of the attack, said they suspected it was chlorine but could not verify that.

“Medium-sized barrels fell containing toxic gasses. The Syrian Civil Defence was not able to determine the type of the gas,” said the spokesman.

The Syrian government and its Russian allies were not immediately available for comment.

Both government and opposition forces have denied using chemical weapons during the five-year-old civil war. Western powers say the government has been responsible for chlorine and other chemical attacks. The Syrian government and Russia have accused rebel forces of using poison gas.

Monitors at the Syrian Observatory for Human Rights said barrel bombs fell on Saraqeb late on Monday, injuring a large number of citizens.

Russia’s defense ministry said a Russian helicopter was shot down near Saraqeb on Monday, killing all five people on board, in the biggest officially acknowledged loss of life for Russian forces since they started operations in Syria.

The helicopter came down in Idlib province, roughly mid-way between Aleppo and the Russian air force base at Khmeimim, near the Mediterranean coast.

The Russian defense ministry said the Mi-8 military transport helicopter had been shot down after delivering humanitarian aid to the city of Aleppo as it made its way back to Russia’s main air base in the western province of Latakia.

No group has claimed responsibility for shooting down the helicopter.