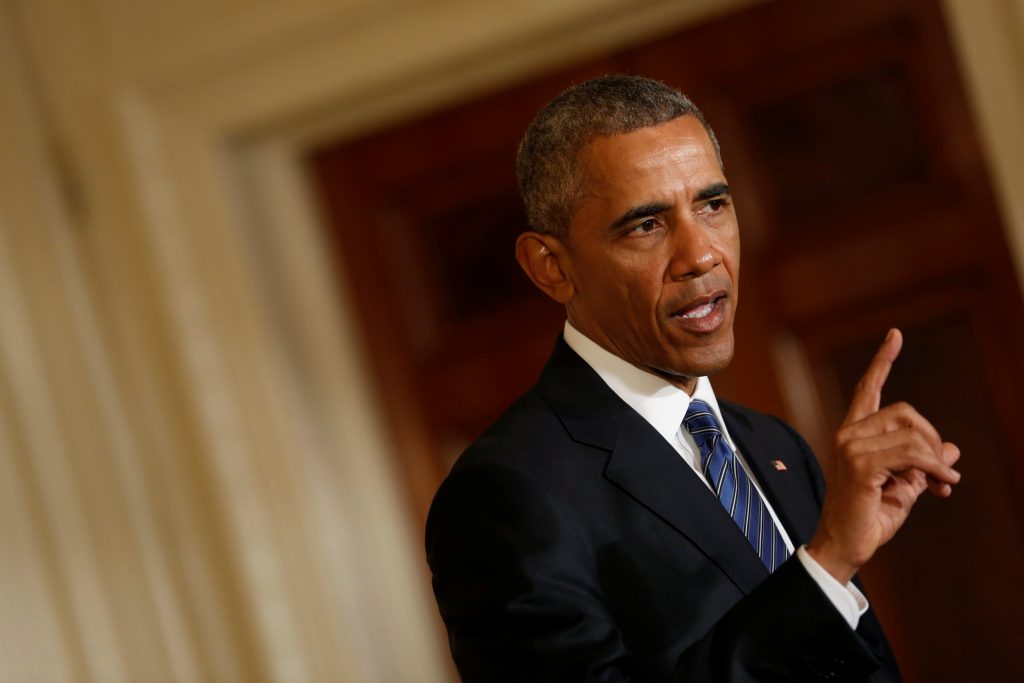 President Barack Obama slammed Donald Trump as “woefully unprepared” to serve in the White House on Tuesday and challenged Republican lawmakers to drop their support for their party’s nominee. “There has to come a point at which you say enough,” Obama declared.

The president’s blistering comments came on the heels of Trump’s criticism of an American Muslim family whose son, a captain in the U.S. Army, was killed in Iraq. A growing number of GOP lawmakers are voicing concern about Trump’s comments, but most of those who have endorsed him are sticking by that stance.

“If you are repeatedly having to say, in very strong terms, that what he has said is unacceptable, why are you still endorsing him?” Obama asked during a White House news conference. “What does this say about your party that this is your standard-bearer?”

The president said his opposition to

Trump is about more than policy differences. He said that while he disagreed with his Republican opponents in the 2008 and 2012 elections, he never thought they were unfit to do the job.

Obama has made clear he plans to be an active player in the White House race, campaigning around the country for Democratic nominee Hillary Clinton. He and first lady Michelle Obama spoke at last week’s Democratic convention in Philadelphia, where Khizr and Ghazala Khan also made an appearance.

Khizr Khan criticized Trump’s call for a temporary ban on Muslims coming to the United States and challenged whether he had read the Constitution. Trump has questioned why Ghazala Khan did not speak, implying her religion prevented her from doing so, and has said he was “viciously attacked” by Khizr Khan.

His feud with the Khan family, however, has heightened concerns among Republicans — not just because of the optics of tangling with a military family, but because Trump is picking the fight just three months from Election Day.

Newt Gingrich, the former House speaker who has advised Trump, said the candidate’s inability to back away from a political land mine “makes him vulnerable.”

“His whole experience up until running for office was in a very combative New York media market,” Gingrich said. “He’s been doing it now for over 30 years. It’s a very deeply held habit.”

Arizona Sen. John McCain, a former prisoner of war, said Trump did not have “unfettered license to defame those who are the best among us.” Rep. Mike Coffman, a vulnerable Republican in a competitive Colorado district, said he was “deeply offended when Donald Trump fails to honor the sacrifices of all of our brave soldiers who were lost in that war.” Missouri Sen. Roy Blunt said the Khans “deserve to be heard and respected.”

“My advice to Donald Trump has been and will continue to be to focus on jobs and national security and stop responding to every criticism, whether it’s from a grieving family or Hillary Clinton,” Blunt said in a statement.

But when asked about Khizr Khan on Fox News Channel’s “Hannity,” Trump responded, “His son died 12 years ago. … If I were president, his son wouldn’t have died, because I wouldn’t have been in the war, if I was president back then.”

Trump didn’t raise the controversy during a rally Monday in Ohio. His supporters in the crowd dismissed the matter.

But the real test for Trump isn’t the opinion of the loyal supporters who attend his rallies. It’s the broader general election audience.