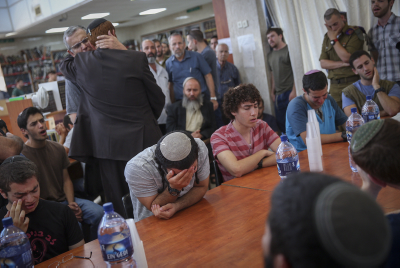 IDF forces on Monday night arrested more suspects in the murder of Rabbi Michael Mark, Hy”d, in June. The latest suspects were picked up in the town of Dura, near Chevron. Soldiers entered a house where one of the suspects was hiding and arrested him as well.

During the operation, soldiers also discovered several vehicles that were being prepared for use in future terror attacks. The new arrests were in addition to others that IDF soldiers and Shin Bet agents made Sunday night, when they apprehended ten terrorists wanted in the murder.

Rabbi Mark was killed and three other members of his family injured as they drove on Road 60 near Otniel in June. The vehicle they were riding in crashed and flipped over after terrorists opened fire on it south of Chevron. They were on their way to spend Shabbos with family members. He was the administrator of the Hesder Yeshivah in Otniel,

Last week, Muhammad el-Fakia, one of the terrorists who carried out the attack on the Mark family, was killed after fighting a pitched battle against IDF soldiers before being killed. Several other members of the gang that attacked the Mark family had already been arrested, including Mahmad Majad Amair, a 38-year-old resident of Dura, along with Zahiv el-Fakia, brother of Muhammad, who helped the gang by providing them with weapons and hiding them afterwards. Those arrested Sunday night were involved in providing weapons and hiding places for the terrorist gang.

On Monday, hundreds of people gathered for the sheloshim of the murder of Rabbi Mark. At the matzeivah consecration, a family spokesperson said that “our father was murdered by terrorists, one of whom is an officer in the Palestinian Authority forces, and a second, a Hamas terrorist who was jailed in Israel and well known to authorities. This same terrorist is a close relative of another terrorist who murdered four students of the yeshivah our father managed.”

As far as the family is concerned, there is no difference between the PA and Hamas, the spokesperson said. “As has been shown in the past, the PA is a terror organization for all intents and purposes, and they work with Hamas to kill Jews. Israel must hurt these families in a strong and damaging way, and ensure that the terrorists realize that terror does not pay. Families that support terror and glorify it  – and call the sons that carry these attacks out ‘martyrs’  – must be sent to the appropriate place: Gaza.”