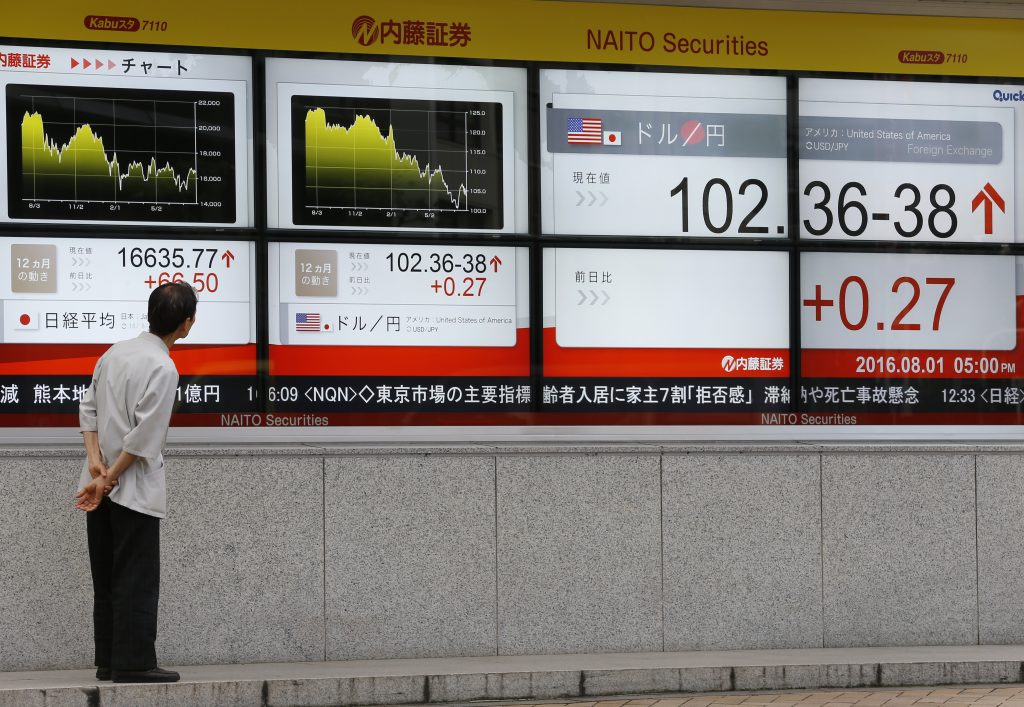 Asian stocks slipped on Tuesday, taking their cues from a modestly lower day on Wall Street, while crude oil prices stabilized after their overnight tumble, and the U.S. dollar edged higher.

MSCI’s broadest index of Asia-Pacific shares outside Japan was down 0.4 percent, after the S&P 500 ended Monday 0.1 percent lower, despite hitting an intraday record high.

Australian shares were down 0.6 percent after the Reserve Bank of Australia’s policy board decided to cut its benchmark interest rate by 25 basis points to an all-time low of 1.5 percent, as expected.

Trading in Hong Kong was suspended for the day as Typhoon Nida swept through the city, shutting down most of the financial hub.

The Nikkei gained more than 6 percent in July, when monetary and fiscal stimulus hopes propelled it to 1½-month highs.

Prime Minister Shinzo Abe’s cabinet is likely to approve a 28 trillion yen ($273 billion) stimulus package on Tuesday, though direct fiscal spending will total only about 7 trillion yen, according to two people briefed on the matter.

“The size and rough contents of the package are already known so I doubt it will move markets. The dollar/yen is likely to fall unless there are clearer signs of a rate hike by the Fed,” said Shinichiro Kadota, senior FX and rates strategist at Barclays Securities Japan.

Japanese government bonds skidded in their worst sell-off in more than three years, despite weaker stocks, accelerating a slide begun in the wake of last Friday’s Bank of Japan easing steps that disappointed many investors. The benchmark 10-year JGB yield was up 9 basis points at minus 0.05 percent , touching its highest levels since early April.

The dollar index, which tracks the U.S. currency against a basket of six major peers, was little changed at 95.693, holding above Friday’s 95.384, its lowest since July 5.

The dollar’s upside was heavy on dwindling expectations that the U.S. Federal Reserve is gearing up to hike rates this year, which faded further after Monday’s weaker-than-expected manufacturing data.

The Institute for Supply Management’s (ISM) index of national factory activity dropped to 52.6 in July from 53.2 in June, below market expectations of 53.0.

U.S. crude tumbled below $40 per barrel on Monday for the first time since April, on heightened worries of a supply glut despite peak summer gasoline demand. But it edged back up on Tuesday, adding 0.1 percent to $40.11 a barrel, after shedding 3.7 percent on Monday