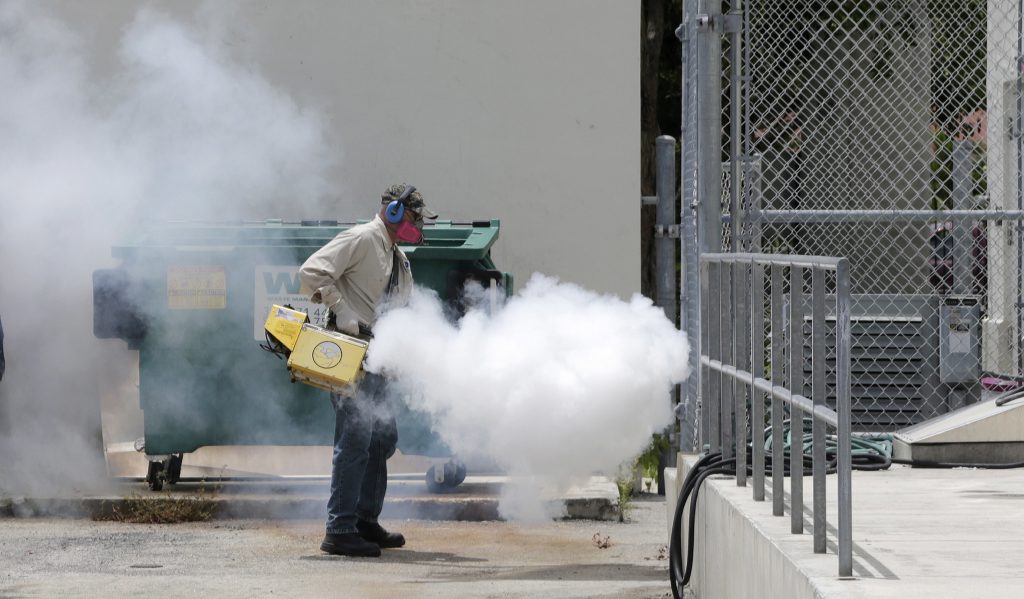 Mike Rigelsky, a lawyer in Ohio, last fall planned the Disney World vacation of a lifetime: A week of theme parks in the Orlando, Florida, sun, including a planned family photo shoot.

Yet as concerns mounted over Zika, the crippling virus that health officials say is now spreading by mosquitoes in southern Florida, Rigelsky and his sister did what scores of parents and other vacationers did before them: They canceled, unwilling to risk an infection of Zika, which can have devastating effects on an unborn child. His sister was expecting at the time.

“A lot of people were hitting the panic button, but we were very clinical about it: We took it from the perspective that we just didn’t know enough,” Rigelsky said. We “had to make a decision: Do you take a risk, however minimal, just for the sake of a vacation?”

With recent reports of Zika infections spreading in the continental United States, including news Monday that 10 more people in an area north of downtown Miami likely contracted the disease from mosquitoes, Florida is finding that tourism, its most vital industry, is faced with a unique threat.

Tourism is the bedrock of the Sunshine State’s economy, and businesses across the nation’s third-biggest state rely heavily on the year-round flocks of travelers to its beaches, theme parks and tourist traps. Florida last year reestablished its dominance as America’s vacation king, becoming the first state to welcome more than 100 million tourists from across the country and around the world.

But the Zika virus presents hazards unlike many the state have encountered: A fearsome, fast-moving, undetectable virus — and an accompanying anxiety, which so far has expanded beyond the virus’ still-minimal spread.

The threat has heated up at the end of Florida’s summer, when the state’s vacation business is at a lull. But it also comes in the thick of mosquito season, raising alarm about how quickly the virus could spread.

More than 1.2 million Floridians work directly in the state’s tourism industry, and tourism and travel spending in Florida totaled $89 billion last year, state economic data show. But tourism stands at the peak of Florida’s economy: Those dollars filter down into virtually every industry, including hotels, restaurants, health care and housing.

The state has released no data on Zika’s effects on tourism, including trip cancellations or postponements. And the infections so far remain clustered in a square-mile neighborhood of south Florida, 220 miles south of Orlando’s theme-park hub.

But businesses say they’re worried that even the appearance of a dangerous outbreak could shake confidence in the state’s tourism backbone — young families.

“That’s absolutely what’s frightening a lot of businesses here: Tourism is Florida’s major economy, and the service sector is hugely dependent on people coming from everywhere,” said Susan MacManus, a political-science professor at the University of South Florida in Tampa. “Businesses want to believe it’s very localized in Miami. But on the other hand, they’re realistic — and fearful it’ll go beyond that.”

Disney offered no comment, but Orlando’s tourism agency, Visit Orlando, said the county has “a highly effective mosquito prevention and monitoring program in place.” Becca Bides, a spokesperson for Visit Orlando, said, “Orlando has a world-class infrastructure and network in place designed to keep our community and visitors secure, healthy and happy.”

Many people infected with Zika will show few symptoms, or nothing at all, but the virus can have devastating consequences for an unborn child. Centers for Disease Control and Prevention scientists say the unborn infant of a woman infected with Zika while she is expecting is at greater risk of microcephaly, severe brain defects and other problems.

In recent months, more than 1,650 people across the U.S. have been infected with Zika, almost entirely while traveling abroad. There is no vaccine against the Zika virus, though travelers to Zika-affected areas are counseled to avoid mosquitoes, wear insect repellent and cover exposed skin.

Some countries have already begun warning against travel to Florida, including Ireland, which over the weekend told women who are expecting or who wish to have a child in the near future to “consider postponing their travel” to the state. Europe is the top region for Florida tourism, with more than 4 million visitors in 2015.

Zika’s spread in Florida has cast a new spotlight on congressional inaction that prevented further funding to help fight the virus. President Barack Obama in February requested $1.9 billion for Zika prevention, but Congressional Republicans and Democrats reached no agreement on funding and left for summer vacation, with their next scheduled reconvening set for Labor Day. Health advocacy groups and others have fiercely criticized Congress and called for emergency funding.

Federal officials on Friday announced that infected mosquitoes had for the first time spread the Zika virus in the continental U.S., pointing to four suspected cases, of one woman and three men, in the trendy Wynwood neighborhood just north of downtown Miami. “As we anticipated, Zika is here,” said Tom Frieden, director of the CDC.

Florida Gov. Rick Scott, R, said on Monday the state had identified 10 people — adding to the four on Friday — who had been infected with the virus, likely from mosquitoes. An official managing the CDC’s Zika response said Friday that the agency expects additional cases of “homegrown Zika” within the coming weeks.

Gov. Scott said the CDC would issue a travel warning, telling women who are expecting or who wish to have a child in the near future to avoid unnecessary travel to the north-Miami area, where infections had been identified.

The Zika-affected area of Miami, bounded by Biscayne Boulevard and Interstate 95, is popular with tourists who visit to see the neighborhood’s expansive murals, interesting cafes and art galleries.

Scott said he is formally requesting that federal health officials activate an emergency response team to help investigate the spread and aid with mosquito control. But he also rolled out the welcome mat for the state’s tourism customers.

“While I encourage all residents and visitors to continue to use precaution by draining standing water and wearing bug spray, Florida remains safe and open for business,” Scott said. “This year, we have already welcomed a record 30 million tourists and we look forward to welcoming more visitors to Florida this summer.”