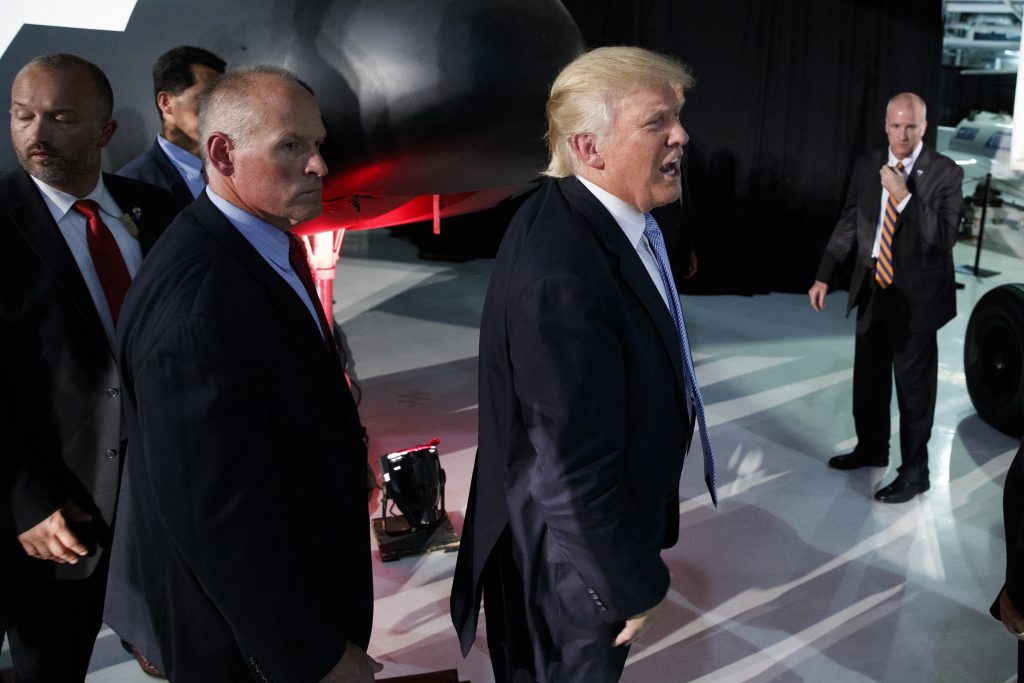 In their struggle for the upper hand on national security, Hillary Clinton and Donald Trump are emphasizing strikingly different themes – he as the bold and cunningly unpredictable strongman who will eliminate terrorism; she as the calm, conventional commander in chief who will manage all manner of crises.

Terrorism is Trump’s national security touchstone, and the Islamic State terror group is his target. He promises to wipe it out, and quickly.

Clinton accuses him of fearmongering and of denigrating the U.S. military as gutted and worn out. She presents herself as the anti-Trump.

“America’s strength doesn’t come from lashing out,” she said in accepting the Democratic nomination Thursday. “Strength relies on smarts, judgment, cool resolve, and the precise and strategic application of power.” By implication, Trump is cast as bombastic, scattershot, impulsive and fanciful.

Trump says he is best suited because he would be a deal-maker and deliberately unpredictable, thus making it more difficult for adversaries to counter his military or diplomatic moves. Clinton pitches her steadiness and depth of experience from eight years in the Senate and four years as President Barack Obama’s secretary of state.

Each has zeroed in on what many consider the most worrisome issues: terrorism and an assertive Russia. The next president, however, will face a wider range of problems, to include ending the war in Afghanistan, managing the nuclear ambitions of Iran and North Korea, coping with a rising China and ending a cycle of bloody instability in Iraq and Syria. There also are challenges in cyber warfare, nuclear weapons and the modernization of the U.S. military.

Trump calls his approach “America first,” meaning alliances and coalitions would not pass muster with him unless they produced a net benefit to the U.S. He drew rebukes from much of the national security establishment when he suggested in a recent newspaper interview that as president he might not defend certain NATO member countries against outside attack if they were falling short of the alliance’s defense spending targets. He also has been accused of being too easy on Vladimir Putin, the Russian president whom Trump has openly admired.

Clinton sees international partnerships as essential tools for using American influence and lessening the chances of war. That is an approach rooted in a U.S. tradition of bipartisan support for institutions such as NATO, whose value and future Trump says should not be taken for granted.

Trump has tried to keep his focus on fear. In his acceptance speech at the Republican National Convention he decried “war and destruction.” He said the long-volatile and often violent Middle East is now “worse than it has ever been before,” suggesting Americans are increasingly at risk.

He mocks Clinton’s experience as a member of Obama’s war Cabinet, labeling her legacy at the State Department as “death, destruction, terrorism and weakness.”

She questions Trump’s reliability. “He loses his cool at the slightest provocation,” she said in her acceptance speech at the Democratic National Convention. “Imagine him in the Oval Office facing a real crisis. A man you can bait with a tweet is not a man we can trust with nuclear weapons.”

The commander in chief’s responsibility in the nuclear arena is not traditionally a hot-button issue on the campaign trail. But it has arisen more regularly this time, mainly because the Democrats see Trump as vulnerable to voter doubts about whether he could be trusted to use nuclear restraint. He raised eyebrows during a Republican primary debate when he seemed unaware of the nuclear “triad,” the bombers, submarines and long-range missiles that have comprised the three basic pieces of the American nuclear arsenal for more than 50 years.

Through her supporters, including retired military officers, Clinton has pushed back on Trump’s claim that he alone has the right formula for keeping America secure.

“She, as no other, knows how to use all instruments of American power, not just the military, to keep us all safe and free,” John Allen, the retired Marine general and former presidential envoy to the international coalition aligned against the Islamic State, told the Democratic National Convention.

Allen presented a counterpoint to Trump’s top military supporter, retired Lt. Gen. Michael Flynn, former director of the Defense Intelligence Agency. In his address to the Republican National Convention, Flynn doubled down on Trump’s portrayal of Clinton as unqualified to be president. He blamed her for “bumbling indecisiveness, willful ignorance and total incompetence.”