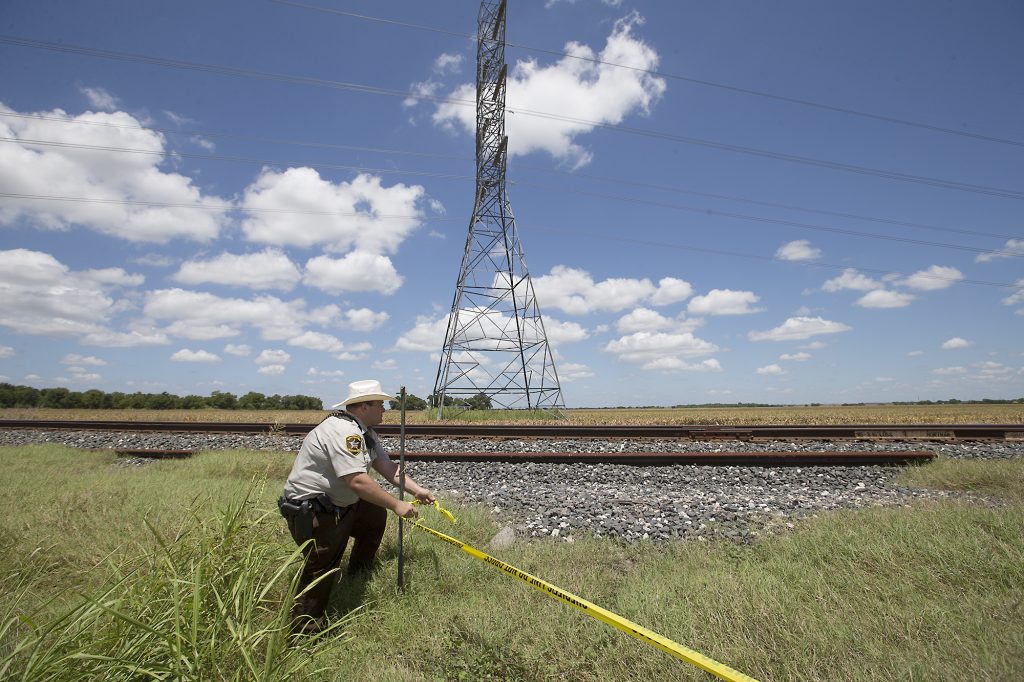 Evidence shows some part of the hot air balloon made contact with high-tension power lines before crashing into a Central Texas pasture, killing all 16 on board, according to federal authorities who are investigating the worst such disaster in U.S. history.

A power line was tripped at 7:42 a.m. Saturday, and the first call to 911 came a minute later, Robert Sumwalt with the National Transportation Safety Board said during a news conference. The crash site was near a row of high-tension power lines, and aerial photos showed an area of scorched land underneath. One witness described to The Associated Press seeing a “fireball” near the power lines.

He also said that the Caldwell County Sheriff had told him it was foggy after the accident, which happened about 30 miles south of Austin, but that it’s unclear what the weather was like during the flight itself.

The pilot was Skip Nichols, 49, said Alan Lirette, who identified Nichols as his best friend, roommate and boss. Lirette said he helped launch the balloon, which was carrying a total of 16 people, none of them children. The NTSB has not yet identified the pilot or the passengers.

The NTSB said the balloon was run by Heart of Texas Hot Air Balloon Rides. Nichols’ social media page identifies himself as the chief pilot at Heart of Texas, which does not appear to be registered with the state of Texas.

The passengers, who have not been identified, met the balloon operator in the San Marcos Walmart parking lot at about 5:45 a.m. Saturday, and traveled to Fentress Texas Airpark. Ground crew members told the NTSB that they launched about 20 minutes after the expected 6:45 a.m. time. Sumwalt said the ground crew communicated with the balloon by cellphone, and the pilot navigated with an iPad.

It traveled about 8 miles from takeoff to crash, and the basket was found about three-quarters of a mile from the balloon material itself.

In a statement, Caldwell County Sheriff Daniel Law and the Texas Department of Public Safety confirmed the number of dead at 16, adding that the NTSB and medical professionals have said identification of the victims will be “a long process.”

An online Federal Aviation Administration database said an Alfred G. Nichols of Chesterfield, Missouri, was medically certified to fly in 1996 and was rated a commercial pilot of lighter-than-air balloons on July 14, 2010. The rating is limited to hot air balloons with an airborne heater. Missouri records also listed Nichols as the owner of Air Balloon Sports LLC, based from the same Chesterfield address as the FAA record.

Lirette said Nichols went by the first name of Skip.

Speaking to the AP from a house he shared with Nichols in Kyle, Lirette would not answer specific questions about the balloon’s launch or its crash.

“That’s the only thing I want to talk about, is that he’s a great pilot,” Lirette said of Nichols. “There’s going to be all kinds of reports out in the press and I want a positive image there too.”

Wendy Bartch, a friend of Nichols, told the Austin American-Statesman that he was “a good pilot and loved people,” was cautious about keeping passengers safe, and had been involved with hot air balloons for about two decades.

Philip Bryant of Ballooning Adventures of Texas in Richmond, which also does inspections and maintenance for other operators, said the balloon that crashed had “very good equipment, very new equipment.”

Nichols brought his balloon into his inspection facility in May 2014 and was issued a one-year recertification, Bryant said. The manufacturer of Nichols’ balloon mandates an annual inspection, he said, adding that he couldn’t do it this year but believes Nichols took it to another inspector.

Bryant said Nichols told him he moved from the St. Louis area to Texas because there was less competition.

Numerous calls to Heart of Texas operations manager Sarah Nichols, 72, rang unanswered, and a woman in Missouri believed to be the pilot’s sister did not return phone calls.

Heart of Texas’ website said it offers rides in the San Antonio, Houston and Austin areas. The company’s social media has photos of a hot air balloon flying with a smiley face with sunglasses on it, people waving from a large basket on the ground and group selfies taken while aloft.

NTSB investigators will look at “three things — human, machine and environment,” Sumwalt reiterated Sunday afternoon. The investigation will include the balloon’s maintenance history and the weather at the time of the crash.

They also will look into whether the operator filed a passenger manifest before taking off, Sumwalt said. Lirette said that several people on board seemed related, because “a lot of last names were the same,” but he didn’t give specifics. Authorities have not released the passengers’ names.

The NTSB is interested in any cellphone video of the flight from witnesses, and investigators will look for devices in the wreckage that might contain video shot by passengers.

Margaret Wylie, who lives about a quarter-mile from the site, told AP she was letting her dog out when she heard a “pop, pop, pop.”

“I looked around and it was like a fireball going up,” she said.

Warning about potential high-fatality accidents, safety investigators recommended two years ago that the FAA impose greater oversight on commercial hot air balloon operators, government documents show. The FAA rejected those recommendations, and the NTSB classified the FAA’s response to the two balloon safety recommendations as “open-unacceptable,” which means the safety board was not satisfied with the FAA’s response.

FAA spokesman Lynn Lunsford said it’s difficult to say whether the Texas crash will cause the agency to reconsider NTSB’s recommendations “until we’ve had a chance to gather and examine the evidence in this particular case.”

Saturday’s crash was one of the worst hot air balloon accidents on record. In 2013, 19 people were killed and two were injured when a balloon caught fire over Luxor, Egypt, and plunged 1,000 feet.