She realized something was wrong Saturday night when the creaking sound outside her second-floor Main Street apartment grew louder.

Kelly Secret didn’t know it yet, but she and her friend were trapped. On one side of their building, a creek had flooded, and on the other, a torrent of raging brown water was devouring Ellicott City’s historic downtown.

“The whole house shook,” she said. “We thought we were gone.”

In two hours, nearly 6 inches of rain had fallen, an event so extraordinary that the National Weather Service said it should, statistically, occur there just once every 1,000 years.

But before the TV cameras arrived, before officials determined that 200 buildings had sustained damage, before the discovery of two bodies that had been swept downriver into Baltimore County, Secret needed to escape.

She had watched the surge push four cars down Main Street, pinning one against a telephone pole. Secret and her friend ran to the front door but discovered that the steps had disappeared. Beneath them, an 8-foot sinkhole had formed in the ground.

Secret, who is in her 40s, couldn’t believe it. Five years ago, she’d lost everything when another Main Street flood ravaged her ground-floor apartment, prompting her to move to a second-story home. But now, here she was again, and this time, Secret didn’t know whether she’d survive.

Helpless, she and her friend retreated to their apartment. Then, suddenly, they heard a cracking noise. Emergency workers armed with axes had climbed onto the roof of one building and kicked in the window of a neighboring antique store. They then chopped a hole in Secret’s wall, allowing her and her friend to climb out.

She works two jobs, one for a local chocolatier and the other for the Ellicott City Partnership. Both organizations are based on Main Street.

“I’m not only homeless, I’m unemployed,” she said on Sunday. Her dark blond hair dishevelled, she carried a backpack that held one set of clothes, and she wore a homemade green T-shirt with these words written on the front: “Historic Ellicott City.” 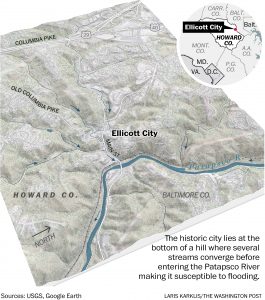 By Sunday evening, authorities had not identified either of the people killed.

One was a pedestrian who had attempted to navigate Main Street and was washed away, according to investigators. The other, a passenger in a car, had tried to escape but was caught in the stream.

Among the 200 damaged buildings, police said, five had been classified as destroyed. About 170 cars must also be towed from the streets or pulled from the river.

“We’ve got a long road ahead of us,” said Hogan, who toured the wreckage with U.S. Rep. Elijah Cummings, D-Md., Sunday morning. “We are going to do everything we can to immediately help people, make sure there is housing, get things back on track.”

Howard County Executive Allan Kittleman, who vowed that Ellicott City would recover, described the 244-year-old town’s epicenter as “a scene from a disaster [film].”

In another harrowing episode, captured on video and posted to social media, three men formed a human chain through the furious current to reach a woman trapped inside her car.

“I can’t do this,” the woman yelled as she crawled halfway out.

“You have to,” someone shouted back.

The man closest to her was Jason Barnes, whose business, All Time Toys, was at that very moment being wrecked by floodwaters. He stretched out his arm, but he could not reach the woman. So he let go of the chain, and stumbled forward. Just seconds after he’d fallen and was nearly submerged, he took the driver in his arms and carried her to safety.

“Jason was incredibly brave and a little bit reckless to wade out to that,” said David Demspter, co-owner of Main Street’s Still Life Gallery. “When he went down, I thought that was it for Jason. I thought he would be swept away to his death.”

Saturday’s disaster was not the first to befall the town.

“It seems,” The Baltimore Sun wrote in 2012, “that Ellicott City has come in for an inordinate amount of disasters from floods, fires and railroad wrecks since its founding in 1772.”

The unincorporated town of 68,000 has endured at least four major floods, according to the Maryland Historic District’s web site, including a pair in the 1970s, another in 1923 and one in 1868 that “wiped out most of early industry in the valley sparing only the flour mill.”

It is bordered both by the Patapsco River and by areas of higher elevation, which means that heavy rain could trigger flooding from two different directions, as it did in this case.

On Sunday, officials asked residents to remain patient as emergency crews assess the damage and work to ensure structures are safe. Hogan and other elected officials said the county, state and federal governments will work together to make sure the affected area is rebuilt.

“This is not going to be cleared up in a day or two,” Kittleman said.

Cummings, who has an office on Main Street and knows many of the city’s business owners, said the rebuilding effort will take “a lot of money and a lot of patience.”

When the rain began, Karry Brown, 42, was enjoying dinner with his wife at the Phoenix Emporium on Main Street. As the weather worsened, restaurant staff moved the 50 or so guests up to a third floor.

“We were just watching in disbelief at how the water was sweeping cars away,” said Brown, of Odenton, Maryland. “It was pretty dramatic.”

His wife’s car was nearly among those washed away. She had parked it on Maryland Avenue, perpendicular to Main Street, which sustained the worst flooding. The water had pushed the car out of its parking spot and into the road.

Once they left the restaurant, they managed to start the vehicle and drive slowly out of town. But soon, Brown said, “the dashboard lit up like a …..tree” and the engine died, forcing them to call a tow truck that arrived about two hours later.

Shannon Tolley, 45, of Manheim, Pennsylvania, had stopped with a friend in the basement of Ellicott Mills Brewing Company. Soon, she said, a flash flood warning flashed on her phone, and water began to leak into the bar.

Patrons were moved up to the first floor, then the second and the third.

“The water was just rushing down the street,” she said, “like a big river.”

By about 9 p.m., the water had receded enough for Tolley, a music teacher, to venture outside. She waded through ankle-deep water to her car, which had been parked high enough on a hill to prevent it from being lost.

“I’ve never seen anything like this in my life,” Tolley said.

One Ellicott City man named Kirk, who lives outside downtown, was watching a film with his family when it began to rain.

“I knew it was going to be awful,” said Kirk, 44, who asked to only be identified by his first name.

He got into his 2007 Toyota 4Runner and drove toward the flooding. Before he picked up a man and two women who’d been stranded, Kirk watched the cars being pushed and pulled down his town’s most beloved street.

Some of those cars, he recalled, were still occupied. But he could do nothing to help the people inside.

“The looks on their faces,” Kirk said as he struggled to stay composed.