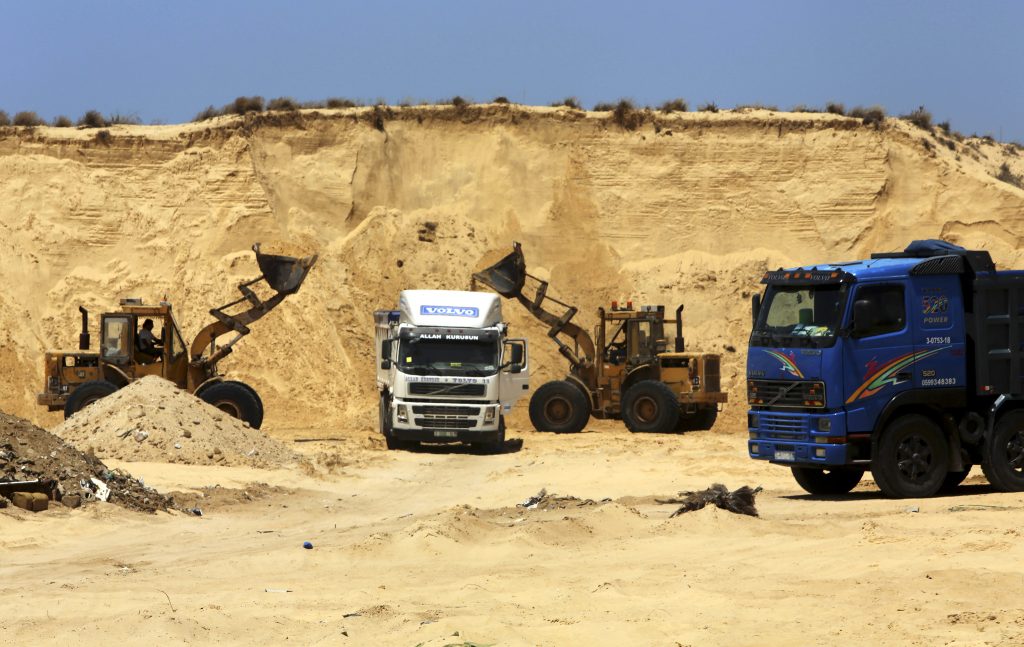 Hamas has begun handing out plots of the land to 40,000 civil servants loyal to the terrorist organization, to make up for millions of dollars in salaries it owes them for the past two years.

The land giveaway is the latest sign that Hamas is struggling financially after almost a decade of uncontested power in the coastal strip.

Gazans grumble about lack of jobs, constant electricity shortages and a blockade imposed by Israel and Egypt that has confined the territory’s 1.8 million people to the tiny strip. The World Bank says unemployment is 38 percent.

Since 2014, Hamas’ main problem has been a dire lack of cash amid Egypt’s clampdown on smuggling tunnels underneath Gaza’s border with Egypt’s Sinai Peninsula. Before the tunnels closed, Hamas earned millions of dollars from taxes on smuggled consumer goods, including subsidized Egyptian fuel.

Later that same year, Hamas and its rival, Palestinian Authority President Mahmoud Abbas, agreed to form a unity government for both Gaza and Yehudah and Shomron. Abbas had lost Gaza to a Hamas takeover in 2007, and this was an attempt to repair the split.

But the deal stalled, partly because Abbas refused to add the 40,000 employees hired by Hamas since 2007 to the PA payroll. In time, Hamas resorted to paying its loyalists 40 percent of their salaries at 50-day intervals.

Since March, after Hamas collected additional taxes, these civil servants have been receiving 45 percent of their salaries on a monthly basis. The price of cigarettes went up 35 percent and an additional $30 in taxes was imposed on each ton of fruit entering Gaza from Israel.

The land giveaway allows each group of four Hamas employees to share a 1500-square-foot plot that they can either build on or sell. Even the sand collected on the land can be sold for about $100 a truckload.

About 13,000 civil servants have already signed up for certificates attesting to their ownership of the plots. Bulldozers are working to get three initial projects launched in August.

Earlier this week, earth-moving equipment dug into a high hill near Khan Younis, scooping out sand and loading it into trucks at the site designated for the Al-Isra 2 housing project.

“No one has the authority to issue decisions to privatize government-owned land in the public interest, except for President Abbas,” said PA spokesman Jamal Dajani.

He dismissed Hamas’ claims that Abbas has neglected Gaza. The Palestinian Authority still pays the monthly salaries of some 70,000 civil servants in Gaza who are loyal to Abbas and left their posts after the Hamas takeover.

After an Israeli-Turkish reconciliation deal in early July, Turkey sent an aid ship to Gaza through an Israeli port and a delegation that met separately with Israeli, Palestinian and Hamas officials to explore Gaza’s energy crisis and outline possible solutions.

However, Turkey’s efforts are mere band-aids for Gaza’s larger woes and could serve to empower Hamas even further, said Mkhaimar Abusada, a political scientist at Gaza’s Al-Azhar University.

“They increase Hamas’ determination to cling to its unilateral governing of Gaza,” Abusada said. “Time will tell if these promises are enough to convince the Palestinian citizen to keep silent over his living conditions.”