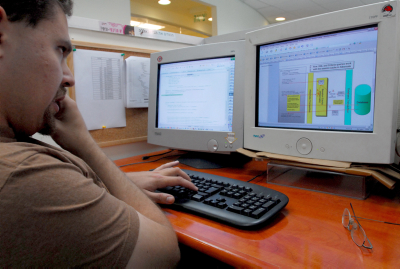 The government on Sunday will consider a bill that will provide automatic work visas to the spouses of high-tech workers approved to work in Israel. The legislation is expected to provide a boost to the high-tech worker program, which was implemented in order to relieve the shortage of workers in key jobs in tech firms.

Israel has expert worker programs in a number of advanced areas, such as math and engineering, in which work visas are provided to experts who work on projects for Israeli companies or the local branches of multinational firms. However, in order to qualify for a visa, the spouses of these workers need to arrange in advance to get jobs that pay double the average salary – about NIS 20,000 ($5,250). That requirement is suspended for the spouses of tech workers, who do not have to arrange for a job or earn a minimum salary before getting a visa.

Tech firms approved for the foreign worker program include all the multinationals with Israeli units, as well as some of the larger Israeli tech firms and start-ups. The Prime Minister’s Office said that it sees the visa program as a very important one, given the importance of high-tech to the Israeli economy.

The visa program has been a matter of great controversy, opposed by some in the government who fear that workers will decide to stay past their visa date and settle in Israel. In order to qualify for a visa, a worker must declare that they have no such intentions. Visas are issued for a year and can be extended only with the personal approval of Interior Minister Rabbi Aryeh Deri, and the Economy and Finance Ministries.