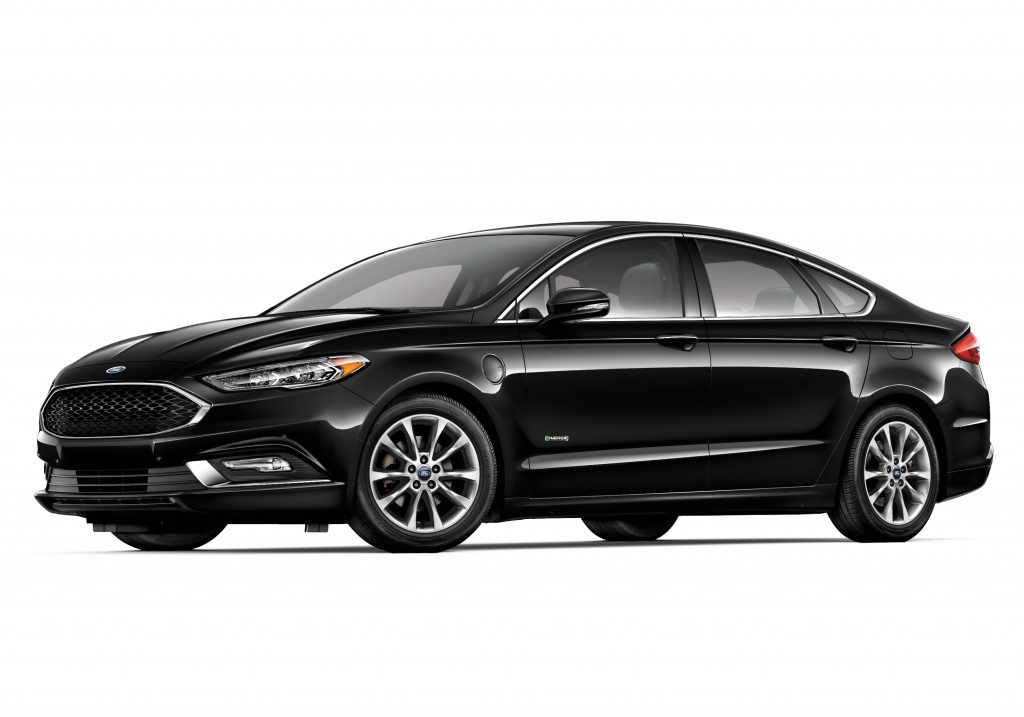 Ford Motor Co. has added another plug-in hybrid passenger car to its growing fleet of alternative fuel vehicles. It’s a Fusion Platinum Energi, which joins Ford’s Fusion, C-Max and Focus family of fully or partly electrified vehicles. Taking the company’s hybrid effort to a new level of luxury, it’s now the leading edge of a fleet of 13 new electrics Ford says it will put on the road by 2020.

Ford boasts that the Platinum Energi’s 610-mile combined gas and battery power range, up from 550 miles on the 2016 model, is the industry’s highest. It’s almost triple the range, Ford crows, of the highly anticipated Tesla Model 3 and its proposed 215 miles of all-electric range.

Ford says the Energi can travel 21 miles on battery electric power before the gasoline engine kicks in. An overnight plug-in is required to bring it back to full power.

The industry pitch on hybrids is simple: You can drive around on battery power, and cover most of your driving needs, then recharge while your car sits idle at work or at home. Many drivers will be able to complete their daily commutes without ever having to visit a gas station.

(Ford’s research says that 47 percent of U.S. drivers have a daily commute of under 21 miles, according to Kevin Layden, the company’s director of electric power train engineering.)

But, unlike battery electric vehicles such as those made by Tesla, the hybrid can be gassed up and run on a traditional engine when needed for longer drives. So, the pitch goes, they offer all the green, gas-free pleasures of electric, with the range-anxiety-reducing reassurance of gas.

But hybrids, like plug-in electrics, don’t sell very well. Fewer than 3 percent of all vehicles sold in the U.S. last year were anything other than traditional powertrain vehicles burning fossil fuels.

So hybrids are priced accordingly, like the special-interest, niche vehicles they are. An entry-level, gasoline-powered Fusion, which gets up to 32 miles per gallon on the highway, starts as low as $22,985. A hybrid version of the base-level car gets up to 43 miles per gallon in highway miles and costs $26,060. Plug-in Fusions, offering fuel efficiency of over 100 miles per gallon, start at $31,995.

To be fair, Ford’s top-drawer PHEV does feel like a luxury car. It’s plush and quiet, around town and on the freeway — so quiet that I often wasn’t aware whether I was in gasoline or electric mode. (Because it has a push-button keyless ignition, I actually got out of the car and locked the doors, twice, without realizing I’d left the engine running. It’s that quiet.)

The Energi’s handling is somewhere between stately and stodgy — this isn’t a zippy car — and the acceleration is well-suited for sensible, adult driving.

Creature comforts abound. The cushy front seats, which are heated and cooled, have a snug, sporty feel. The back seats, though not offering massive leg room, are Mercedes-level plush. The “white platinum MET Tri-coat” paint job, a $595 extra, is luscious. Why, the cupholders even light up, in delicate blue tones, when the front doors are opened.

The dash and console area are clear and uncluttered. Ford — like Fiat Chrysler, Cadillac and some other brands — has eliminated the traditional gear shift arm on the steering column and replaced it with a rotary transmission dial in the center console.

The infotainment system is intelligently designed and displayed. It synced up easily with my iPhone — not all systems do — and felt pretty intuitive as I negotiated my way through entertainment, climate control, navigation and communication screens. No one that I called on the phone told me I sounded like I was speaking from inside a 50-gallon drum.

It also comes standard with a moonroof, a feature that confuses me. What’s it for? Do you use it in the daytime, and pretend you’re in a convertible? Do you use it at night, to view the moon?

There are technical extras, too. The Fusion has an adequate blind-spot detection and lane departure warning system — which asked me if I was “drowsy” and showed me a coffee cup icon when I drifted sideways — a reverse sensing system and “pre-collision assist,” which anticipates a crash and then either helps you apply the brakes or makes a phone call to your insurer to alert them that you’ll be making a claim.

Ford’s “adaptive cruise control with stop-and-go technology” will do something similar. When engaged, it will slow the vehicle, right down to a full stop, and then resume freeway speeds, without input from the driver.

I am a big supporter of such semi-autonomous driving features, which could help prevent a huge number of freeway accidents. I tried several times to engage this one, though, without success.

The suite of safety and convenience features includes a hill-hold button, so the car does not lose altitude when it’s in gear on a slope. It also includes a remote start function, so that, presumably, you can get the AC or heater going before you enter the vehicle.

The Platinum Energi also comes standard with what Ford calls “Enhanced Active Park Assist.” This system asks the driver to indicate he’s looking for a parallel parking place, and then allows the car to find one and get into it with only accelerator and brake pedal input from the driver.

It’s not as sophisticated as some similar systems I’ve experienced but is very welcome for people who are, like me, poor parallel parkers.

The Energi doesn’t come with two things that I would miss: trunk space and a spare tire. Like most plug-in hybrids, the Energi uses the rear storage area to house its large battery, which means this substantially sized vehicle won’t carry substantial luggage. (The C-Max does this too. That fact alone pushed one of my family members away from the plug-in, toward the hybrid, because she couldn’t live with so little trunk space.)

Also, like a lot of new cars, the spare tire has been replaced by a tire repair kit, suitable for roadside emergencies but not designed to get you any farther than the nearest Pep Boys.

Customers are increasingly inclined toward the hybrids. With the Platinum Energi, getting there in a plug-in hybrid is just a little more plush.