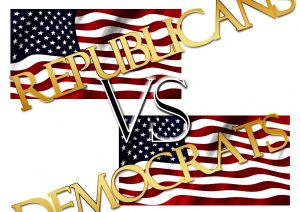 The Democratic and Republican party conventions have starkly framed the core question facing voters in November: Is America broken?

Do they live in the America described by Republicans: a once mighty nation bowed down before adversaries, fearful of crime and terrorism, its military weakened, its economy near collapse?

Or is it the America depicted by Democrats: a still mighty nation that stands tall on the global stage, has rebounded from financial crisis and has made strides caring for its most vulnerable citizens?

Does America, for all its imperfections, still work as a nation and need a leader like Hillary Clinton who will build on past accomplishments? Or is it rotted and on the brink of collapse, needing a nonpolitician “savior” like Donald Trump.

A look at the sharply contrasting images of the United States depicted in the conventions and how they could shape the presidential race:

Donald Trump was characteristically blunt. This was a “moment of crisis for our nation,” he told Republicans on the convention’s final night. America faces a threat to “our very way of life.”

His words reflected the dystopian theme of the convention: Illegal immigrants were flooding across the border and killing Americans. Anti-police protests were leading to the shooting of officers. Terrorism was on the rise. Political correctness stifled free speech. Trade deals were sending U.S. jobs overseas.

Drastic change is needed, speakers said. That wouldn’t come from Clinton, portrayed as a shifty politician and crooked, inept secretary of state who had endangered national security by using a personal e-mail server for official communications. Republican delegates repeatedly chanted “Lock her up!”

The only hope was Trump. “There’s no more time for us left to revive our great country,” said Rudolph Giuliani, the former New York mayor.

At their convention, Democrats offered their own grim picture of America — from 2008. The stock market had plummeted, unemployment soared and automakers were at risk of shutting down.

Certainly, Democrats recognized, many problems remain. The gulf between rich and poor is too great, gun violence is out of control and tensions between police and African Americans have had deadly consequences. But Trump would only make things worse, they argued. He was portrayed as an egomaniacal, deceitful bully who is dangerously ignorant about foreign and domestic affairs.

The only hope was Clinton. “Don’t let anyone tell you that our country is weak,” she told delegates. “We’re not.”

Obama said electing Clinton would “show the world we still believe in the promise of this great nation.”

So how do Americans see their country? Polls offer a mixed picture. Americans overwhelmingly say their country is heading in the wrong direction. Yet Obama generally gets favorable ratings.

A bigger question: Where are the angry Americans?

Presidential elections are determined by state-by-state electoral counts, not nationwide tallies. Clinton starts with an advantage. If she can hold onto the states won by Obama, she wins. Her chances are further boosted by increases in nonwhite voters who tend to favor Democrats.

To win, Trump has to capture some states that Obama had won. His best hope may be winning northern industrial states like Ohio, Pennsylvania and Wisconsin. Those states have white, blue-collar workers who have struggled in the changing economy.

Many are longtime Democrats. But Trump has to hope they’ll identify more with the bleak picture of America portrayed by Republicans rather than with the Democrats’ sunnier scenario — and that will prompt them to cross party lines and help put Trump in the White House.