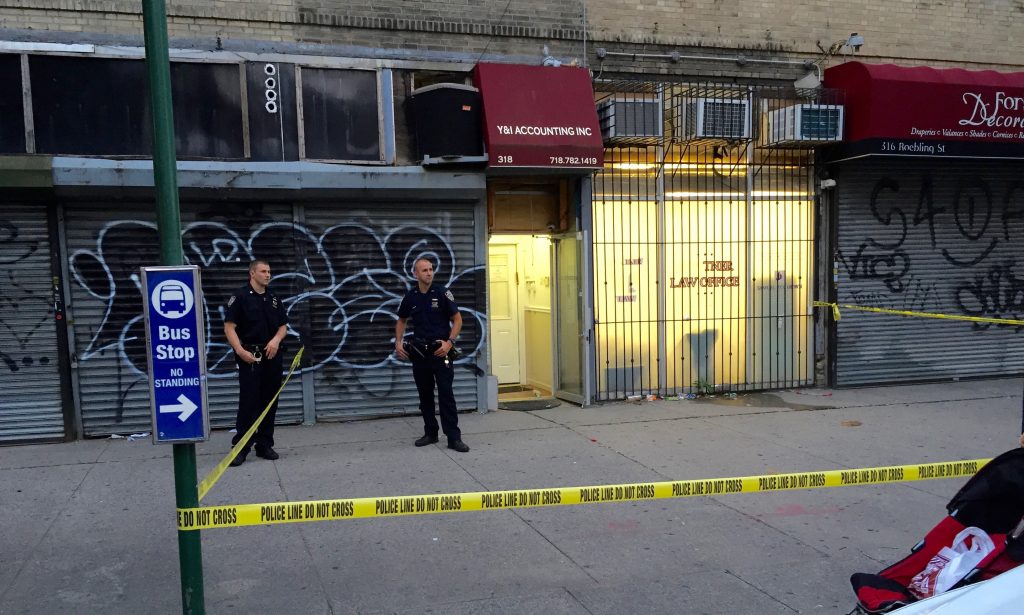 Police are searching for two men who carried out a daring robbery on a Jewish-owned office here Thursday afternoon.

At around 5:40 p.m., the two armed men, one wearing a FedEx uniform, gained entry to the Y&I Accounting office, located at 318 Roebling Street, between South 8th and South 9th Streets. The thieves tied up a secretary. Then, police say, they pistol-whipped the manager of the office and shocked him with an electrical device, possibly a Taser, before making off with an undisclosed amount of money. The manager, a middle-aged man, was taken to Bellevue Hospital in stable condition. The secretary, a young woman, was treated by first responders at the scene and released.

Police described the suspects only as black males, one of whom was wearing the FedEx uniform and the other in plainclothes.

Security-camera footage from a nearby business show the perpetrator in the FedEx uniform being chased and fleeing across the street. As he runs, the perpetrator removes a latex glove from his hand and drops it on the ground, and also removes from his head and drops a dark baseball cap.

The area in front of the accounting office was roped off with crime-scene tape, as was the area across the street where the perpetrator dropped the items, as NYPD Evidence Collection Team members processed the scene and detectives gathered security-camera footage from nearby businesses.

Residents seemed shocked at the crime, which they described as a rare occurrence.

“I love this neighborhood,” one man, who lives above a store on the block of the accounting office and declined to give his name, told Hamodia. “I have lived here for 12 years. I think it’s a great neighborhood, but I am sorry that this happened. I just hope everyone is okay.”