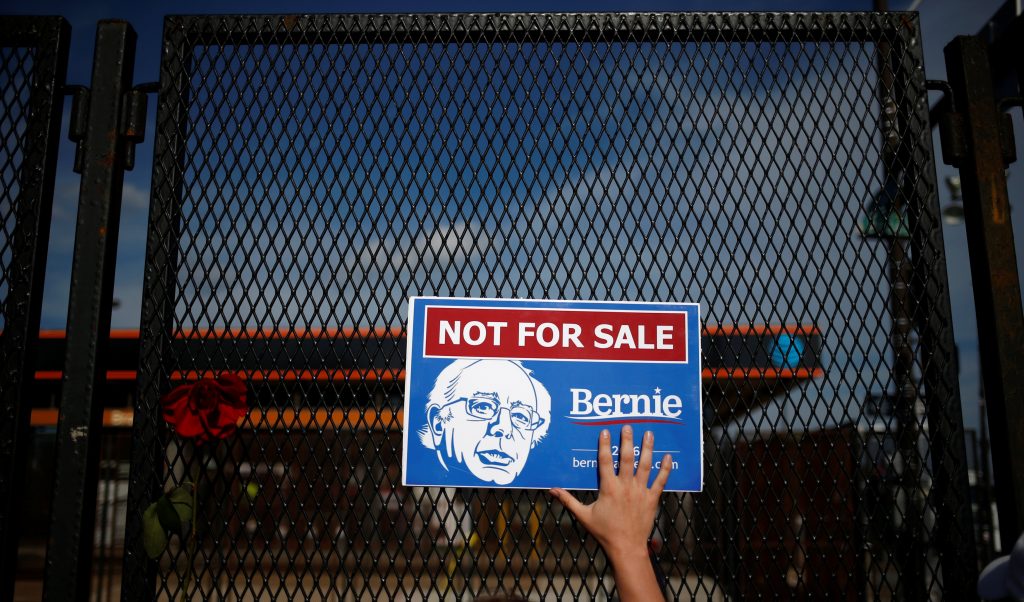 Bernie Sanders loyalists warned that the Democratic Party could rupture over the nomination of Hillary Clinton after a volatile night that saw a large group of Sanders delegates and supporters exit the party’s national convention to stage a sit-in at a nearby media tent.

They rejected Sanders’ call for unity even after the Vermont senator took the symbolic step of declaring Clinton the winner of the state-by-state delegate count inside the convention in Philadelphia.

“I suspect we are witnessing an event that will fundamentally change American politics,” said Cory James, 22, a college student from Flint, Michigan, who expects the Democratic Party to break apart over Clinton’s victory.

Thousands of activists have taken to the streets during the convention this week to voice support for Sanders, a liberal U.S. senator, and his progressive agenda. The “Bernie or bust” brigades that have marched across the sun-warped city threatened to disrupt Clinton’s moment as the first woman to be nominated for president by a major U.S. political party.

“We all have this unrealistic dream that democracy is alive in America,” said Debra Dilks, of Boonville, Missouri, who spoke as a protest broke up near Philadelphia’s City Hall.

She said she wasn’t sure she would even vote in November.

At the media tent protest, some had their mouths taped shut, while a few others spontaneously sang, “This land is our land.” They said they were holding a peaceful protest to complain about being shut out by the Democratic Party.

In the streets outside, Sanders supporters who had spent the day protesting began facing off with police. They started scaling 8-foot walls that blocked off the secure zone around the arena parking lot. Police and the Secret Service immediately arrested four protesters, who will be charged with entering a restricted area. They’re scheduled to appear in court Wednesday.

Protests continued into the night as Sanders supporters and an anti-police brutality group joined together.

Earlier in the day, activists held a midday rally at City Hall, and then made their way down Broad Street to the convention site. By early evening, a large crowd had formed outside the subway station closest to the arena. The crowd consisted of an assortment of protesters espousing a variety of causes, but mostly Sanders supporters and other Clinton foes on the left.

“I think people were hoping we could sway the delegates and show that there really is a movement here,” said Alexis Holmes, a school janitor from Carbondale, Illinois, who has been protesting in the city since Sunday.

The longstanding bitterness between Sanders’ supporters and Clinton’s seemed to grow worse over the past few days after a trove of hacked emails showed that officials at the Democratic National Committee played favorites during the primaries and worked to undermine Sanders’ campaign.

Sanders had urged supporters Monday to fall in line behind Clinton for the good of the country. But many were not swayed.

In a separate protest against police brutality and racial injustice, about 500 people marched down Broad Street to City Hall. Protest leader Erica Mines told the crowd that it was an “anti-police rally” and a “black and brown resistance march” and instructed all white people to move to the back.

March participant Tiara Willis, of Philadelphia, said she subscribes to the slogan “I’m with her … I guess.” She said she would not back Trump and called Clinton, “the lesser of two evils.”