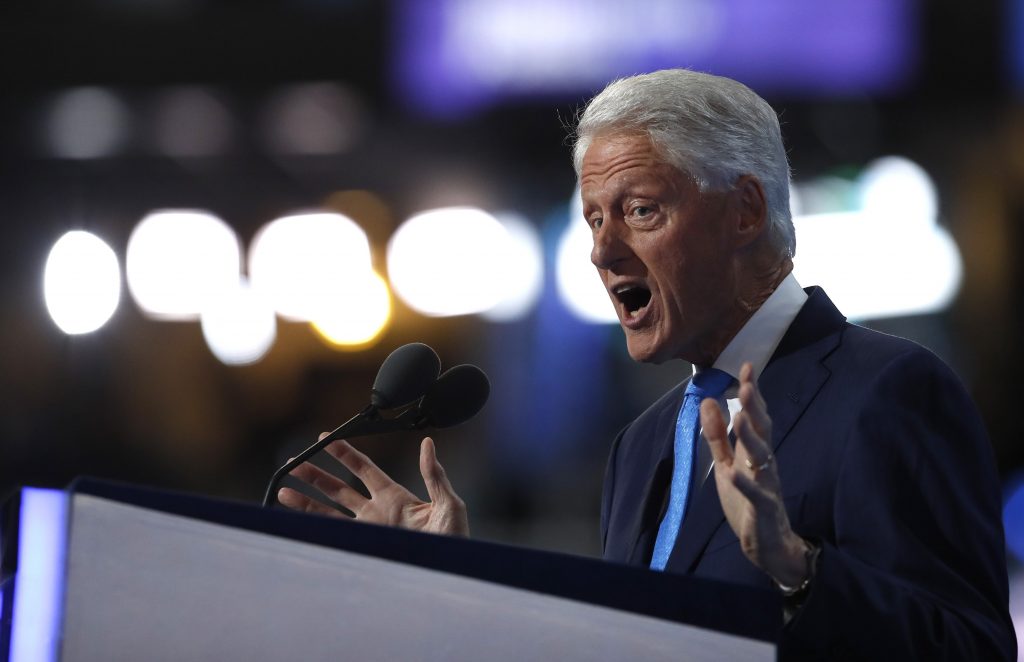 It was Bill Clinton’s night at the Democratic convention, one more prime speaking slot for one of the most gifted politicians of the era. But his appearance on behalf of his wife also helped to underscore that the party that nominated Hillary Clinton for president on Tuesday night is no longer the one he reinvented a quarter-century ago.

Bill Clinton was the original New Democrat. On Tuesday, he was speaking to a party that had just adopted the most liberal platform in the party’s history. At times in this campaign, he has seemed caught between the then and the now, grappling with the forces that have been buffeting the party’s coalition and altering its priorities. But it is Hillary Clinton who has most had to adapt.

The changes have forced her to be both a leader and a follower in her campaign for president. She is now the leader of the party, which she proved by winning more states, votes and delegates in her nominating battle against Sen. Bernie Sanders of Vermont.

But she has not reinvented the party the way her husband did. The surprising strength of the movement behind Sanders forced her to scramble to stay abreast of a party that continues to shift leftward and away from the centrist policies once championed by those in the now-distant New Democrat movement.

From a $15 minimum wage to tuition-free education at public universities for many families to an expansion of Social Security benefits to a public option under the Affordable Care Act, the Democratic platform reflects the priorities of the Sanders campaign and the acceptance of some of those proposals by the party’s new nominee.

Sanders and Clinton both campaigned on pledges to be tough on Wall Street, a departure from the 1990s when under Bill Clinton the Democrats sought political money and economic advice from Wall Street. But Hillary Clinton’s paid speeches to Goldman Sachs gave Sanders an issue with which to hammer her during the primaries, and he threw her on the defensive.

Nothing symbolizes the change in the party more than the issue of trade, although because of organized labor’s power within the Democratic coalition, the base of the party has long stood in opposition to most trade agreements.

In 1992, Bill Clinton challenged those conventions, advocating for a North American Free Trade Agreement in union halls in states such as Michigan and eventually steering the agreement through Congress.

Neither Hillary Clinton nor Sanders has done anything close to that, even though most presidents, including President Barack Obama, have supported major trade treaties.

Opposition to the Trans-Pacific Partnership (TPP) trade agreement was at the heart of Sanders’s critique of an economic system that he said has favored the richest Americans over everyone else. Hillary Clinton, who had championed the possible benefits of a TPP as secretary of state, opposed it as a candidate, recognizing that to do otherwise would have carried a sizable political risk.

Sanders’s supporters still question whether she truly opposes the deal and worry that she might capitulate and support a vote on the TPP in a lame-duck session after the election. On Tuesday, campaign chairman John Podesta told a Wall Street Journal lunch group that her position remains firm.

“What the president chooses to do, whether he thinks that’s an effective strategy, is up to him,” he said. “But that’s not our strategy. We’re against TPP before the election and against TPP after the election.”

On Tuesday, there was a reception here for some of the older New Democrats in the hours before the call of the roll that would make Hillary Clinton the party’s nominee. The gathering was for a screening of “Crashing the Party,” a documentary about the Democratic Leadership Council (DLC), the centrist organization Bill Clinton used to help change the party and make himself president.

The DLC was a reaction to a series of devastating defeats in presidential elections during the 1980s that left the Democratic Party on its back. “We won in those three elections a smaller percentage of total electoral votes than any party has ever won in three consecutive elections,” said Al From, who helped found the DLC, and wrote a book that inspired the documentary.

By the late 1980s, Democrats had little credibility on national security, economic management or dealing with the violent crime that then plagued many big cities. Many Americans then saw the Democrats as “the party of overwhelming government,” From said. “Our challenge was: How do you tackle those problems in a way that is the most progressive you can?”

The results were policies that brought conflict with the party’s liberal wing and many of its minority politicians, including the Rev. Jesse L. Jackson. The policies put a focus on the middle class rather than redistributive economics, welfare reform, fighting crime and personal responsibility. At a time when it was said that Democrats might never win the presidency again, Bill Clinton proved that prediction wrong, winning twice and starting a string in which the Democrats won a majority of the popular vote in five of the past six elections.

Obama went further, winning twice with more than 50 percent of the vote, the first Democrat since Franklin Roosevelt to accomplish that. And it has been under Obama that the party began a significant shift to the left that has left behind many of the policies of the Clinton years.

California Gov. Jerry Brown, who lost to Bill Clinton in the 1992 Democratic primaries and whose views then on trade and other issues clashed with those of the former Arkansas governor, described the DLC during a Tuesday interview as “a remnant of another period.”

Reflecting on the centrist views of government’s role vs. the views of Democrats today, Brown said: “They [today’s Democrats] want more interventionist government to make things more fair. They want the instrumentality of government. There’s more belief that more can be done. No one’s going to say government is the problem, not the solution. They’re not going to say that.”

The ideological sorting out of the parties that took place in the late 1990s and the first part of this century has contributed to the shifts away from Bill Clinton’s centrist message. No longer are the Democrats a coalition of Northern liberals and Southern conservatives or moderates, just as the moderate-liberal wing of the Republican Party has all but disappeared.

Brown and From were never political soulmates, but today they share an analysis of reasons why the party is so different. It was the rising economy of the late 1990s, symbolized best by the tech boom of the period, which started the country in the direction of greater wage and income inequality. It was also during that period that the shift toward a globalized economy accelerated.

From agreed that economic inequality, though it existed, was not the flashpoint during the early Clinton years that it has become today. “The circumstances are changed when you go through a depression like we did in 2008 and 2009, when you can point a finger at somebody,” From said. “In this case, people point the finger at Wall Street. It’s a different world. We needed Wall Street for investment to grow the economy so everybody could do better. Now they’re the villains.”

Bill Clinton created an agenda for a different time and place, for his party and for the country. Both have now changed, and it will be Hillary Clinton’s challenge to devise a new agenda compelling enough to win the presidency and effective enough to deal with the problems that will await the winner in November.