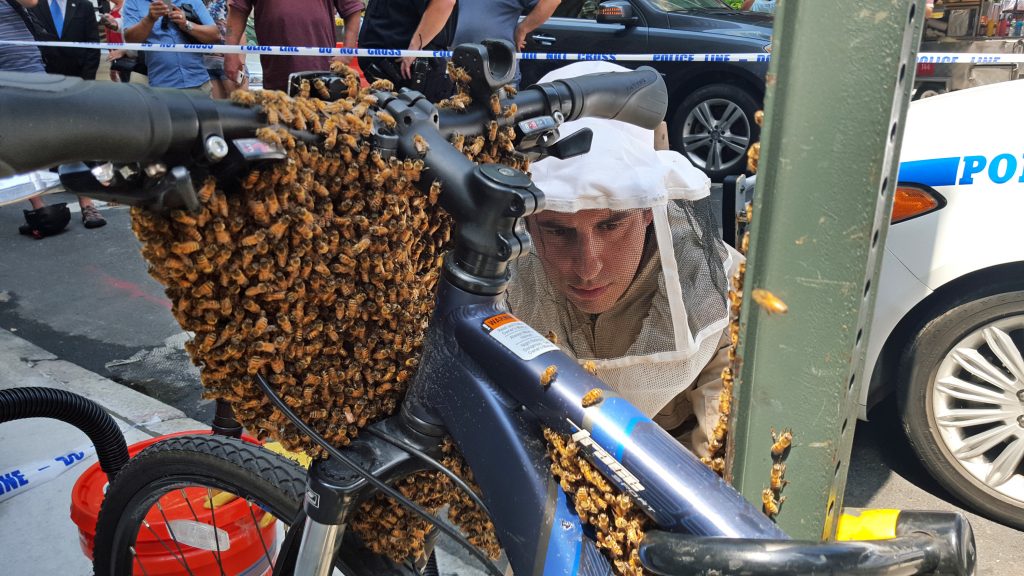 Daniel Higgins is one cop who knows a thing or two about sting operations.

Although the New York Police Department detective’s main job is working in a counterterrorism unit, he is also one of two official department beekeepers who dons protective gear and heads to the scene when buzzing swarms of the insects glom onto buildings, streetlights or other pieces of the urban landscape.

The NYPD bee brigade responds to dozens of calls each spring and summer, including some recently where officers used vacuums to remove grotesque, wiggling masses of tens of thousands of bees from a lamppost near Grand Central Terminal, the awning of a restaurant and even a chained bicycle near Times Square.

Last month, the 911 alert that appeared on their handheld electronic device read: “Investigate possible crime: vicious animal.” That led to a swarm that had attached itself to a brick wall in Brooklyn.

“You try to get there as quickly as you can to corral them because you don’t want the bees to fall on the public. Even a wind gust can knock them down,” Higgins said.

About 20,000 bees were once plucked from a Park Avenue bush.

As unlikely as it may seem in a city considered a concrete jungle, New York has plenty of bees drawn to greenery that produces pollen, including flowers, plants, trees — even landscaped rooftops.

Since 2010, when the city legalized beekeeping, the New York honeybee population has soared from just a few dozen illegal hives. Most of the buzzing inhabitants live in about 300 government-registered hives in gardens, backyards and rooftops including an elegant Waldorf Astoria hotel terrace, according to the city’s Health Department. Hundreds more thrive in surrounding suburbs.

City officials welcome the bees — except when hives become overcrowded and about half the bees leave to form swarms that last a few days while an egg-laying queen and her “scouts” search for a new home. But to startled city residents, the phenomenon can have a horror-like quality.

“They’ll come in with a loud buzz, like a school of fish, and then they cluster up,” Higgins said.

Wearing a protective suit, gloves and a meshed veil, Higgins and fellow NYPD beekeeper, Officer Darren Mays, suck up the huddled creatures with a vacuum linked to plastic buckets.

“We don’t kill the honeybees. We don’t spray them. We don’t destroy them. We relocate them,” Higgins said.

First the bees go into cardboard boxes with vents that are taped shut. Then they’re donated to beekeepers so they can replenish their hives as bees die off, according to Higgins.

The detective, who has been on the bee beat for two years, said he and his father also privately keep more than 50,000 bees in Hastings-on-Hudson, a village in Westchester County north of the city. The honey goes to family and friends.

It’s a gentler task than Higgins’ day job, manning the high-tech surveillance system that helps the department keep watch over key parts of the city.

The police department’s role in removing bees isn’t without controversy.

Michael Hegedus, president of the Brooklyn Beekeepers Club, said he’d prefer if the city left the job of fetching the bees to private collectors who could harvest the swarms to supplement their own hives. A package of 10,000 bees is worth up to $120.

That’s “money hanging off a tree” that could go to beekeepers who barely cover their costs, Hegedus said.

“In a normal situation, police would tell people to call their local beekeeper and everybody (would get) a little piece of the action,” he said.

Scientists consider the insects a biological treasure, warning that their diminishing worldwide population could eventually spell disaster for humans; bees are essential for pollinating crops that sustain humans.

In the United States, commercial beekeepers lost 44 percent of their honeybee colonies from April 2015 to April 2016, according to the Bee Informed Partnership, a Maryland-based research group.